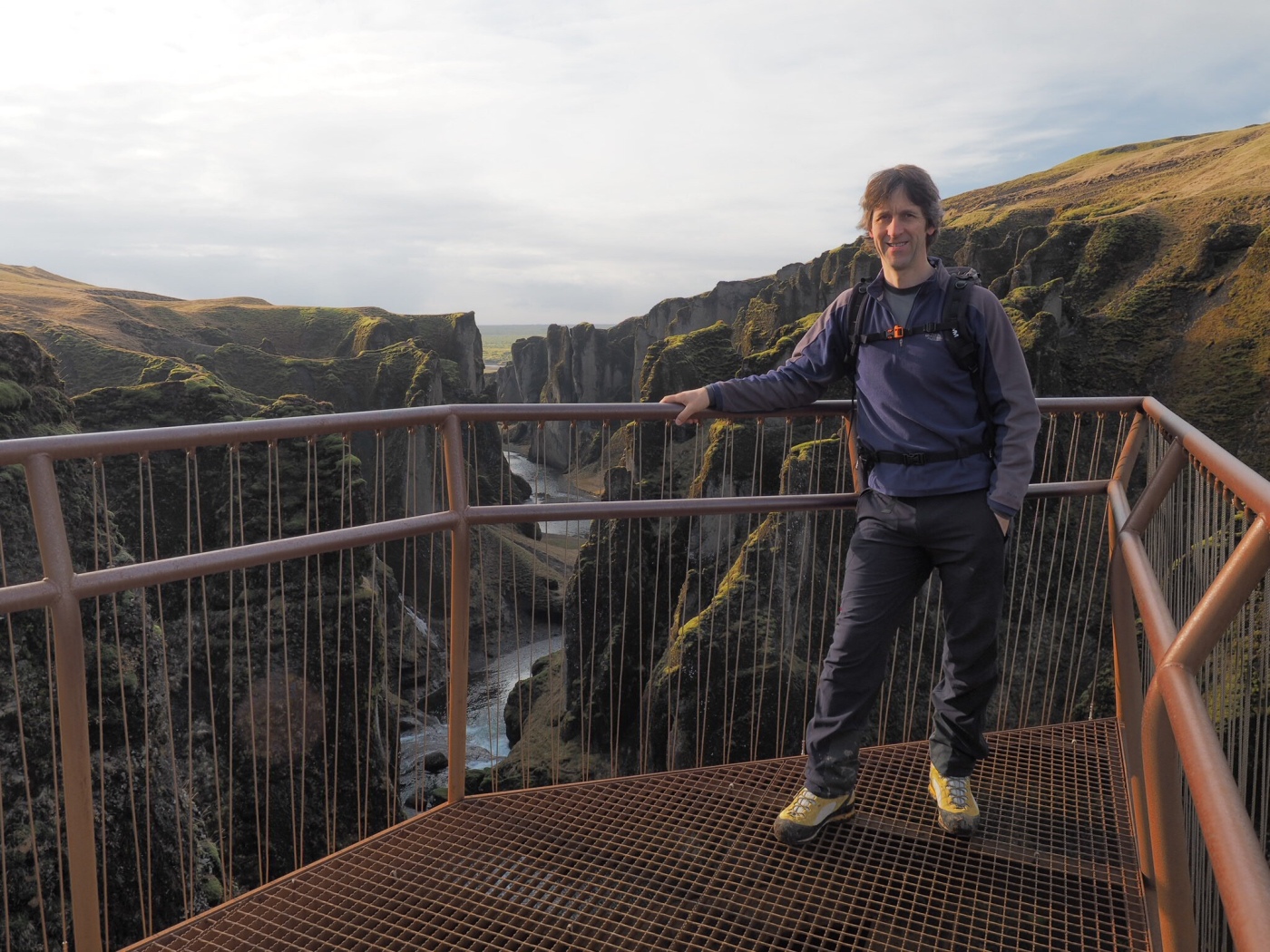 We haven’t travelled far from the cabin today… We haven’t needed to… There are lots of natural wonders on our doorstep. In fact there seem to be some every way we turn in Iceland!

We had another early start. I can’t blame feeling poorly any more so it must just be insomnia or excitement about what the day has in store. First on the agenda today was the Fjaðrárgljúfur gorge… another name I can’t pronounce! We got to the site to find signs that it was closed. I’d read that the road is only suitable for 4 wheel drives and can be closed in winter, but that it’s possible to walk the extra 1.5 kilometres. It was a lovely warm morning with no wind, so we parked the car, grabbed our packs and set off up the road. At a junction we debated which way to go because I thought the sat nav in the car had been directing us straight on, but there was a tourist sign that seemed to point right. We decided to go right. After about three quarters of an hour, we reached a sign and small parking area, and turned onto a track to the gorge, not far beyond. Phew! 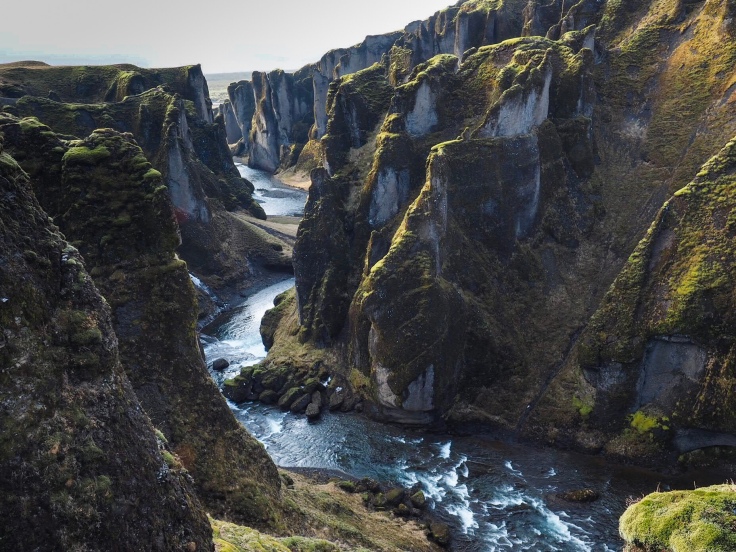 The gorge was stunning! Up to 100 metres deep and 2 kilometres long, with a waterfall at the end, spilling into the river at the bottom of steep cliffs, which were covered in yellow and green grass and moss. We were the only people there and spent some time admiring the views and trying to take photos. I wanted to use my camera on the tripod but there were metal barriers on the walkway and it was really difficult to get a good position with the lens between the bars, without the legs of the tripod disappearing through the gaps in the metal grid under our feet. I didn’t want to drop anything through the holes. It was a long way down! I got a couple of shots but then gave up and held my camera instead.

We were surprised not to see anyone else, especially as we’d passed some people on the way, not long after leaving the car. They must have given up and turned back. We decided to follow the path along the top of the gorge, hoping we could get back to the car that way. There were signs everywhere saying not to leave the path to avoid damaging the flora, and many of the viewpoints were closed off. We did hop over the ropes a couple of times for a better look, although I did feel guilty. I felt even worse a short time later! 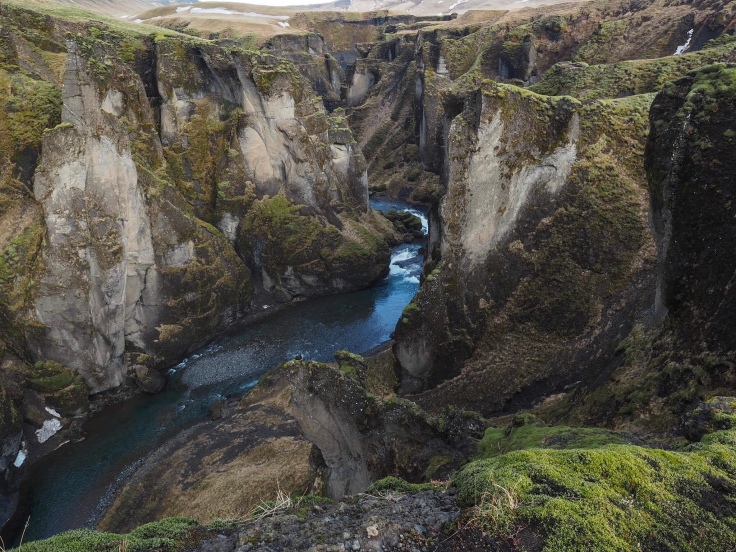 We started to meet more and more people coming up the path in the opposite direction. We had obviously reached the gorge by an unconventional route. As we were standing with a group of other people at a viewpoint towards the start of the gorge, a lady came running up the hillside shouting at everyone. The others all turned and ran, but we just stood looking confused!

It turns out the whole gorge has been closed not just the roads to get to it, and the lady was the park warden. She was cross because signs on the road that the majority of people had taken clearly said that it was closed to allow the flora and paths to recover. Apparently, it’s been a hard winter and the thick layer of permafrost means that, when the surface ice turns to water, it can’t drain away so the ground was sodden, the paths were churned up and the plants were struggling to grow. We explained that we had come via the road to the top of the gorge, and apologised for misunderstanding the signs. In fact, we had quite a long, pleasant chat with her as we walked down to the road bridge at the bottom of the gorge, explaining how there are similar problems with erosion in Wales, particularly on Snowdon. 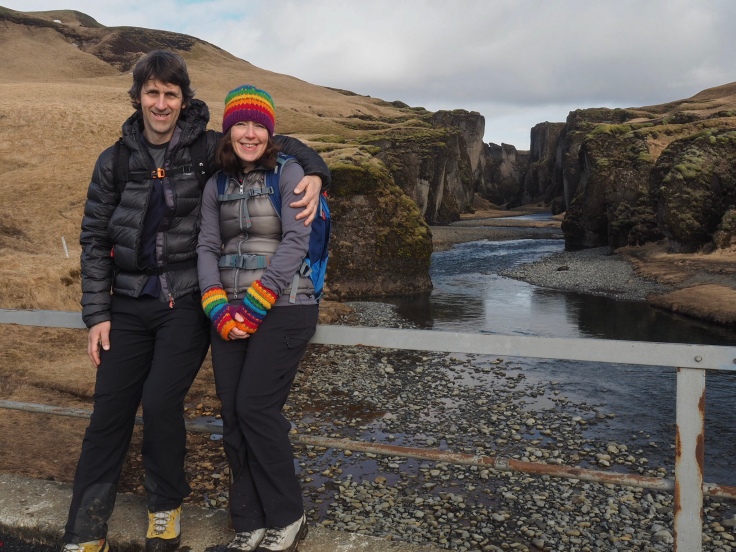 We took a final picture from the bridge… a selfie using the tripod and timer… then we set off back down the road to the car, waving goodbye to the warden. It was a much shorter route than we’d taken on the way in. However, if we hadn’t gone the other way, we probably wouldn’t have got to see the whole gorge, and we wouldn’t have had it all to ourselves. Plus it was good to get out in the fresh air and have a decent walk 🙂 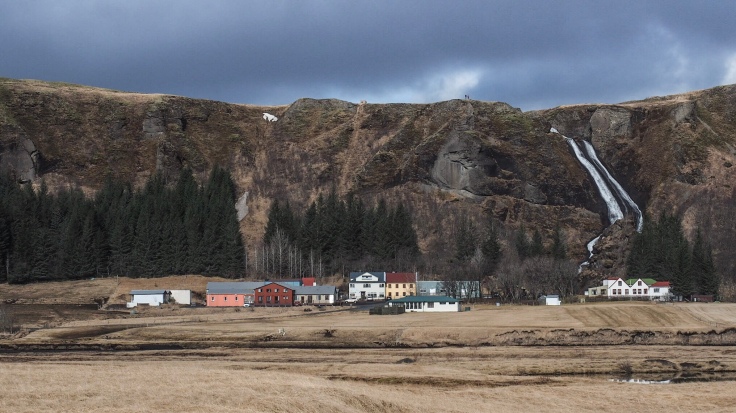 John’s been great about my photography… very patient and obliging! As well as posing for me and waiting for me, today he stopped on the road back to Kirkjubæjarklaustur so I could take a picture of a view that I liked. To me, it’s a typical view of Iceland from the ring road… flat yellow grasslands where the snow has melted, coloured and panelled houses, and cliffs with waterfalls. After this, we headed for Stjórnarfoss waterfall, which I’d read was near the road and relatively small but very pretty. 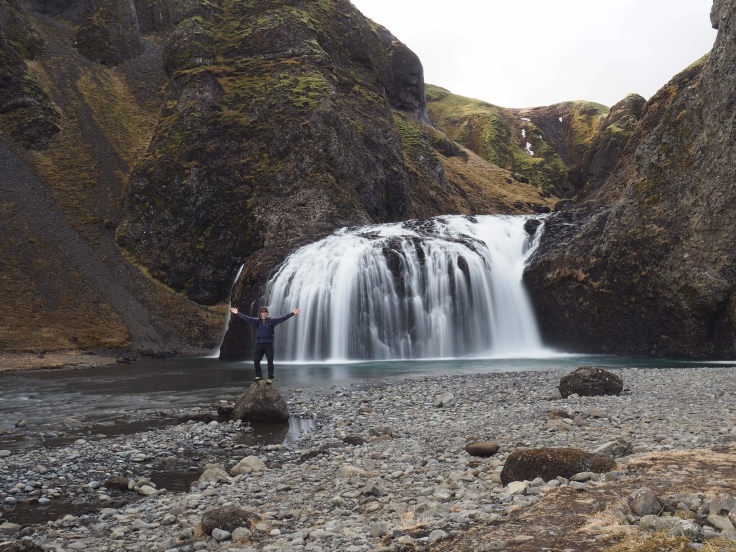 Next we went to Dverghamrar (The Dwarf Cliffs), which are hexagonal columns of basalt, topped with cube-jointed basalt. According to folklore, dwarves and elves live in these cliffs. I had to have a wee there… I hope I didn’t upset them! 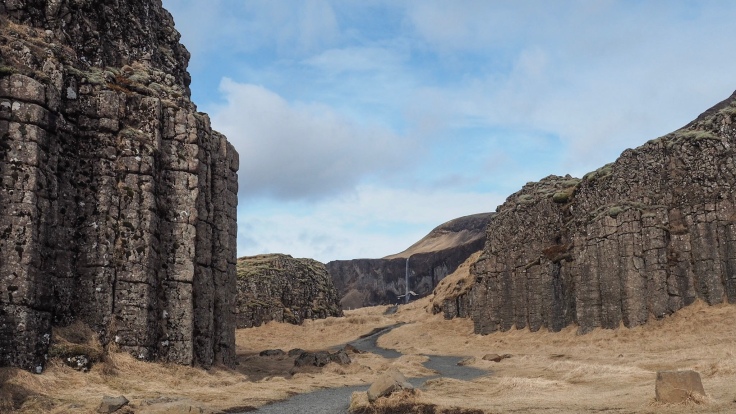 We also passed another waterfall, Foss á Síðu, which can be seen in the distance in the photo above. We also stopped to take a picture of that, plunging over rocks and snow with contrasting colours. As I said… there are waterfalls everywhere and they’re all very different! 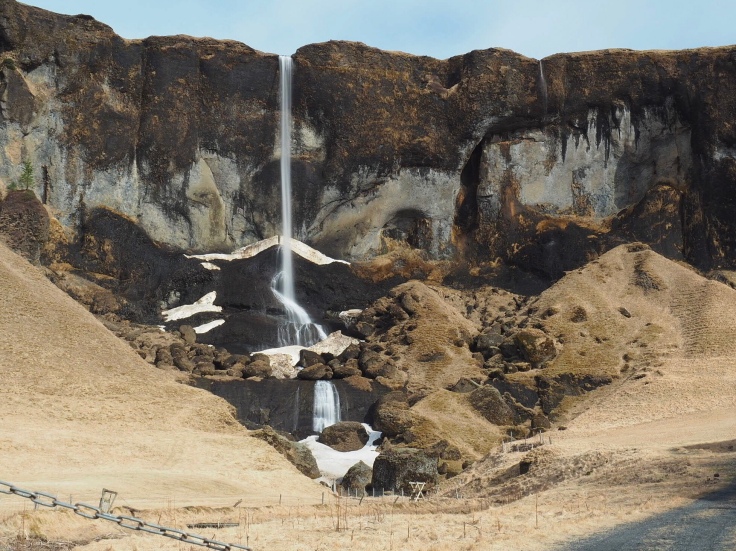 It’s been a busy day! I’ve been wanting to take a photo of the Icelandic horses, which we think are very pretty. Today, I got the opportunity. The Northern lights are still hiding though! 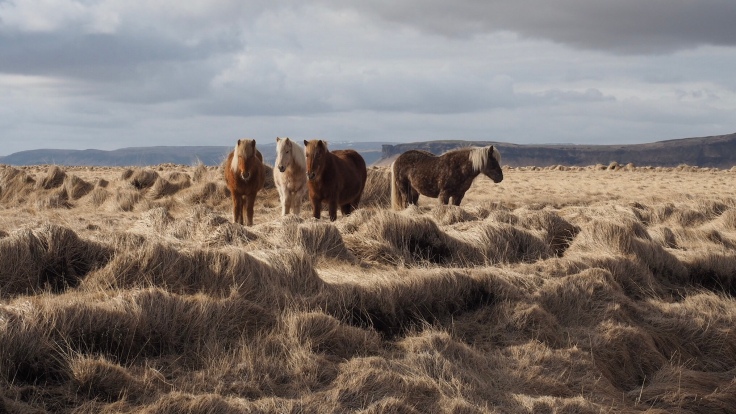 Tomorrow we plan to visit Skaftafell glacier and two glacial lagoons, Fjallsárlón and Jökulsárlón. I hope the weather stays good 🙂

2 thoughts on “A gorge, dwarf caves and lots of waterfalls”