Rubbish night’s sleep… the ship was rolling on the sea and the bedside table was creaking for some reason so I tried moving my phone, iPad and bottle water but to no avail. Finally, I turned myself around so my head was sat the opposite end of the bed, away from the bedside table, and managed to fall back to sleep.

John woke me just before the alarm went to tell passengers it was 7.15 Dutch time. We got ready, had breakfast and then headed up to the deck to watch as we sailed into the port of Rotterdam. We were amazed how industrial it is, with tubes, chimneys and smoke everywhere, and ships carrying everything from cranes and tractors to gas. 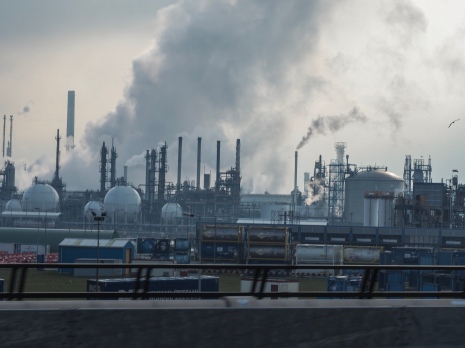 When we disembarked, we headed to Kinderdijk, 45 minutes away, where there’s a series of nineteen 18th century windmills strung out along the dykes. As it was Sunday, the roads were quiet; however, when we got there we struggled to find parking for the campervan. We ended up in a neighbouring village, changed our clothes and cycled back to see the windmills. 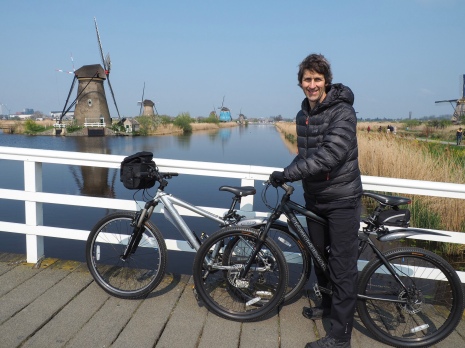 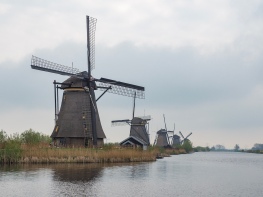 It was still quite cold, misty and murky… not the best conditions for taking photographs for my college project! We weaved our way through hundreds of tourists, ringing the bell on my bike to warn them we were coming, and making our way further down the dyke to where it was quieter. Thankfully, the sun had now come out and our freezing hands came back to life, and the windmills stood out against the blue sky, and were reflected in the water. 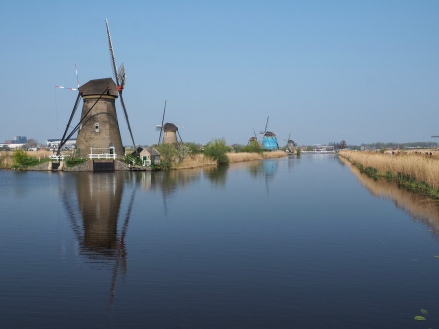 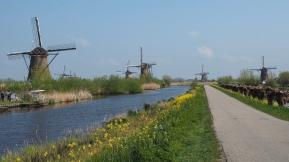 We meandered up and down the dykes, taking pictures of the beautiful windmills, trying not to run anyone over. When we’d had enough, we returned to the van and John put the bikes on the back of the van while I made lunch. After this we drove to Schiedam, where there are much larger windmills… the largest in the world! We parked at a campervan aire near one of the windmills, with the bikes on the back of the van hanging out over the canal!

We then wandered round the town, soaking up the warm sunshine, watching the birds on the canal. Lots had beautiful babies. I love the little stripy one hitching a ride on mummy grebe’s back!

After a wander round the town, we stopped in a bar for a few beers, then moved to a restaurant for dinner… pretty expensive but delicious! Now we’re back at the van with a cup of tea, whiling away the time before bed and deciding what we fancy doing tomorrow.