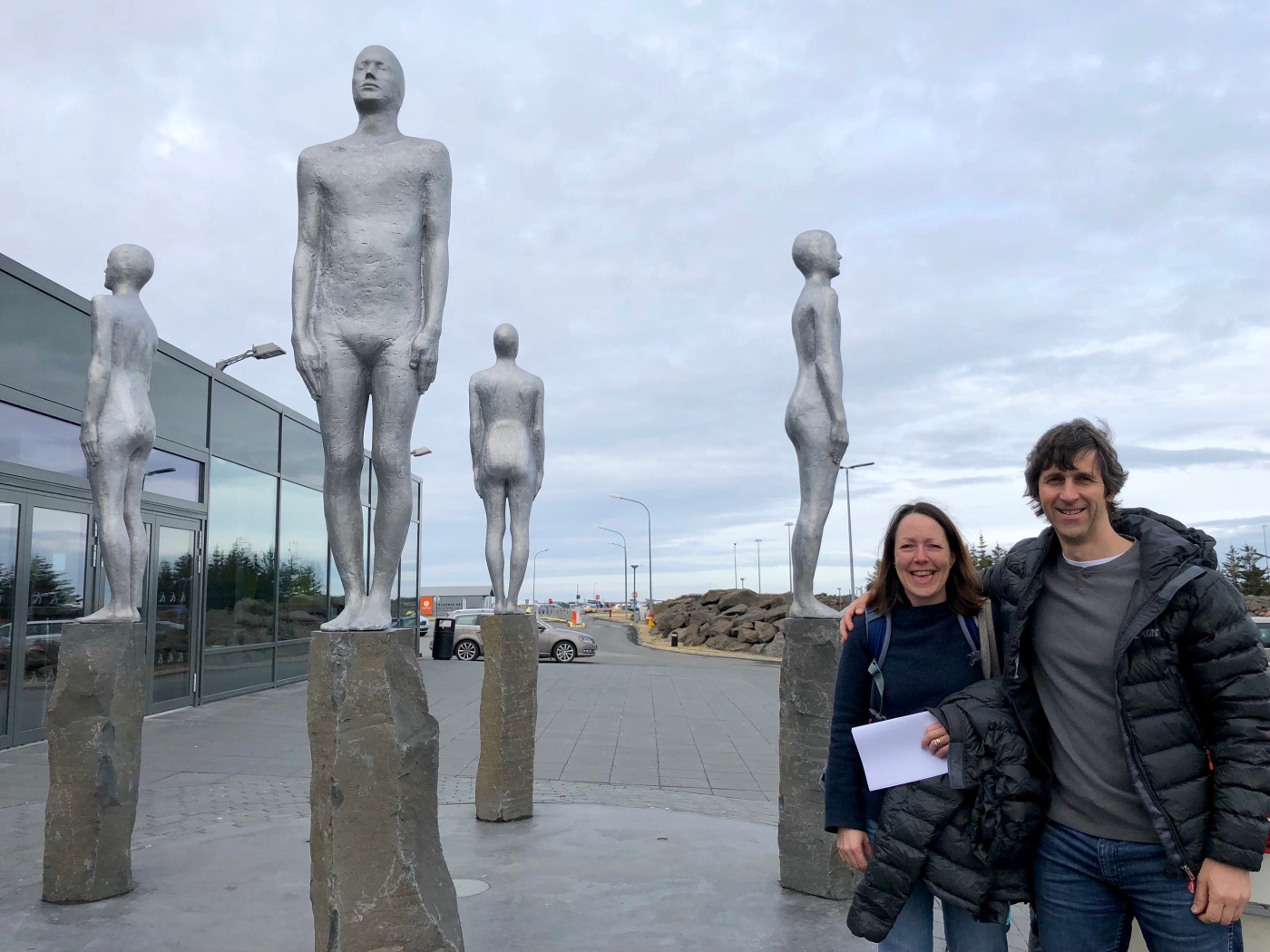 It’s been a long day with some ups and downs, but we’re now settled in our Airbnb in Iceland.

After a disturbed night’s sleep, I woke at 6.00, then realised it was really 5.00 because the clocks had gone forward… ugh! I was hot all night because we forgot to turn the air conditioning down, and my throat was sore. I read for a while until John woke, then we had a cup of tea before getting ready and going down for breakfast. Breakfast was fantastic… there was a huge choice. I had fruit and yoghurt, croissants, bacon and hash browns, a muffin with crushed avocado and tomato, and tea, coffee, fresh orange and champagne… well, I didn’t know when I might eat again! 😉

After packing and checking out, we took the sky walk to Terminal 1. It all went well… apart from a little confusion in the lift where we ended up on the wrong floor… and we soon got to the Icelandair check in desk, dropped our baggage and made our way to security.

Both of our cabin bags ended up being selected for further investigation at the scanning stage… we think because we had so much electrical equipment, even though we’d emptied out phones, the iPad, my camera and lenses etc. And despite removing his hiking boots and belts and emptying his pockets, John set the alarms off and had to be frisked. Repacked and redressed, we headed to the duty free shop, wanting to top up on gin and wine, having heard how expensive it is in Iceland. We eventually managed to find out what our allowance was, bought a litre of gin and 2 wine boxes, as well as some food for the plane, and went to sit down for a bit. 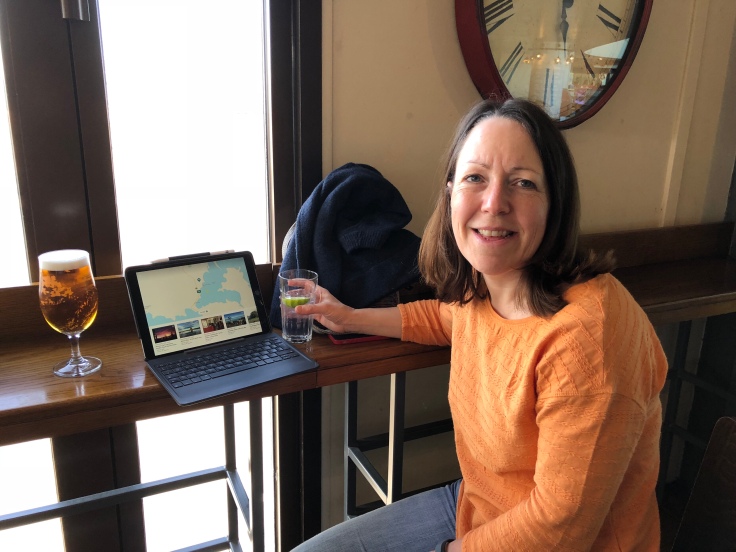 We picked a table by the window and John bought us some drinks. By now I had a headache as well as a sore throat, and we were both hot and bothered. It was nice to relax for a bit and we watched our plane come in to land as we drank our drinks and checked our emails and various social media notifications. An Airbnb cancellation pinged into my inbox. No!!!! Which one is it?!!! Luckily it wasn’t one of the Iceland Airbnbs, but a Tasmanian one for our summer trip. Nevertheless, this was still stressful because I remembered having trouble finding the first one that cancelled our booking. Unfortunately, their message says they’ve got to sell their property due to unforeseen circumstances so I couldn’t be cross for long. Thankfully, I managed to find another place. It’s £50 more expensive than the first one, but it looks lovely and at least I won’t be worrying about it on this holiday now.

At the boarding gate, we were very lucky because our seat numbers were called immediately after the business class passengers, so we were seated quickly and had no trouble getting our rucksacks and bags of duty free in the overhead lockers. We were quite pleased to see screens in the seat backs. We like to watch the progress and speed of the plane, and identify the lakes, mountains and towns we’re flying over. We also decided to watch a film. I picked ‘Wild River’ and, as soon as we’d taken off we started watching it, hoping we’d have time to see it all.

The flight was very relaxing. As we watched the hunter in the film speeding along in his snowmobile, I warned John he won’t be allowed to go that fast on our Icelandic trip, and laughed when the FBI agent asked if they could go less than 80mph next time! As we were watching, the film kept stopping for the in flight announcements and we started thinking we might not see the end of the film because the remaining flight time was pretty much the same as the remaining film time. About 30 minutes from the end, John said he’d have to go to the toilet. I’d been wriggling in my seat wondering if I could wait until we were in the airport so I was quite pleased, even though it might mean we missed the end of the film. We paused the film and dashed to the loo and back as fast as we could. Then the announcement came that we would soon be landing, fasten your seatbelts. Come on film! Thankfully, it finished soon after the coast of Iceland came into view, about 5 minutes before we landed at Keflavik airport.

Check out was easy. We used our EU passports… moaning that it won’t be long until we have to go in the lane for non-EU citizens. Our 3 holdalls arrived as soon as we got to baggage reclaim, and the car hire guy was waiting for us in arrivals and took us straight to their office, leaving behind the others he was meant to collect because their flight was slightly late. 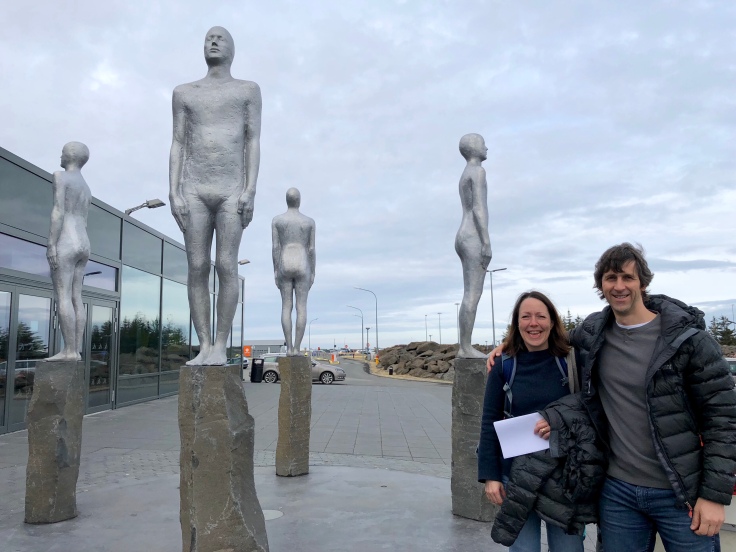 Soon we were on the road to Selfoss. The landscape was flat and barren, and very yellow, probably where the snow had been. I loved the lava rocks covered in fluffy green moss, and the snow covered glaciers in the distance. We passed the steam from the hot tubs at the Blue Lagoon, small hamlets with coloured, panelled houses, and groups of Icelandic horses roaming around in the grasslands. Waves were crashing onto the beaches and, after about an hour, we crossed the causeway that meant we were nearly at our Airbnb.

The Airbnb was very easy to find. It’s an apartment with a small hall and shower room, and a large room with a double bed, table and chairs, and a small kitchenette. After dropping our bags off we went to find the Bonus supermarket, which research suggested is the cheapest. Our shopping, with enough basic supplies for just 3 or 4 days, was still £90! The shopping was pain free though and we managed to identify what we needed, even though the language is so very different from any we’ve encountered before.

We’re both very tired and I’m definitely coming down with a cold, so we decided to eat in and have an early night. I’d just sat down on the bed to look at my iPad when a message came through from a neighbour to say the house alarm is going off. Lots of phone calls later, and help from 3 lots of friends and neighbours, and it seems everything is fine. I hope it doesn’t happen again. We hate putting other people out.

The major disappointment for me is that my photography trip to see the Northern Lights had to be cancelled tonight because it’s too cloudy. We might get another chance in the next couple of days but the forecast isn’t looking promising. Oh well… even if I don’t get to go and learn from a local photographer, hopefully I’ll get a chance to have a go myself later in the trip. And hopefully I’ll be feeling better. It’s really not fair having a cold when Ive been looking forward to this holiday for so long! At least tomorrow is a relatively easy day… Geysers, Gullfoss and The Secret Lagoon, we think.

One thought on “Manchester to Selfoss. Welcome to Iceland”