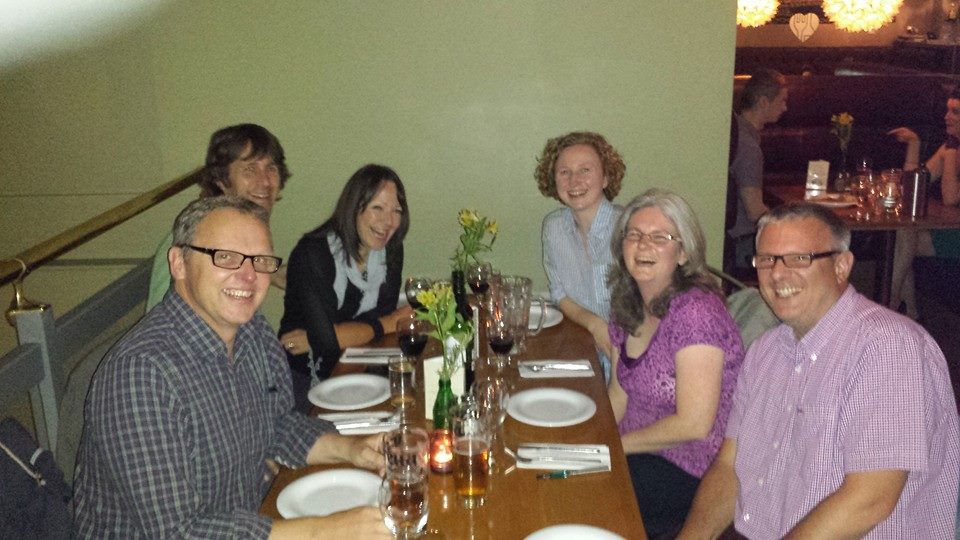 Indulge me for a moment, while I reminisce… This weekend five of us are spending the weekend together and walking 26 miles on the Anglesey coastal path, while we remember our lovely friend, Cath Willis. Cath was everything anyone could want in a friend… kind, funny, intelligent and lots more thoughts spring to mind.

I met Cath in secondary school, where we grew up, on the Wirral. We caught the same school bus from Bromborough and Spital respectively, to Birkenhead High School, and we were in the same class. Cath and other friends who lived locally introduced me to ‘boys’, several of whom became short lived boyfriends. I used to walk from my house on the Poulton Lancelyn estate, through the Dibbinsdale Woods, to another friend Ella’s house, where we generally congregated. I have fond memories of those times.

When we were a bit older, we joined the 64th Birkenhead Venture Scouts, chosen because it was a sea scout group and had nice blue uniforms instead of mushroom brown ones. Ventures was where I got my love of hiking, camping and music (and drinking!), and it’s where met John. It was a bit of a dating agency and we all swapped dates periodically, but John and I aren’t the only couple who are still together from that time: there are several others. Some of my favourite memories of Cath and other friends, including Mandi, Sarah and Martin, are from that time in my life. I can hear Cath’s laugh in my head as I reminisce!

After we left school and went to university, I lost touch with my school friends, Cath included, although I still saw some people from ventures occasionally. There was the odd school reunion, but I find reunions quite difficult because my memory is rubbish and I’m embarrassed when I can’t remember people. Apart from a brief spell on Friends Reunited when I chatted to a few people, it wasn’t until I started using Facebook that I got back in touch with Cath and some other school friends properly. Then in 2012, a group of us decided to get together in Liverpool, which was primarily driven by Cath and Martin (my boyfriend in ventures before John!) who had become close friends when Cath turned out to be Martin’s University tutor! 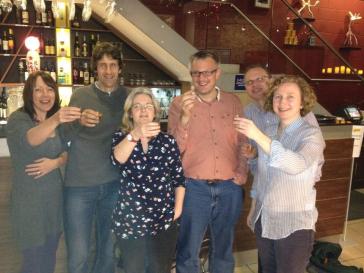 Our first get together in Liverpool 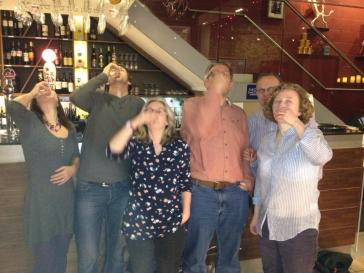 The restaurant gave us a night cap to get rid of us!

Since then we’ve met a couple of times a year in Liverpool. Cath would choose some lovely restaurants, bars and pubs for us to visit, and even the odd nightclub! The evenings were always very enjoyable, and we did a lot of laughing. The downside was sometimes a hangover the following day! 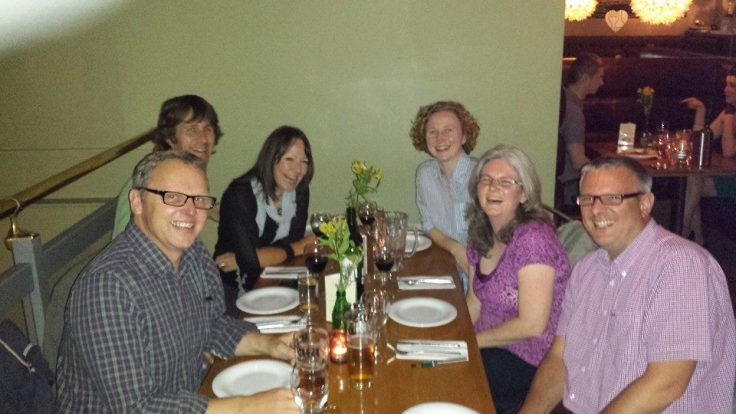 We were all stunned find out Cath had a brain tumour… and the worst type of brain tumour. She coped amazingly well, appearing to stay strong through all the trials of surgery and treatments, even those that she had awful reactions too. Every time I saw her she was still smiling. Amazing. 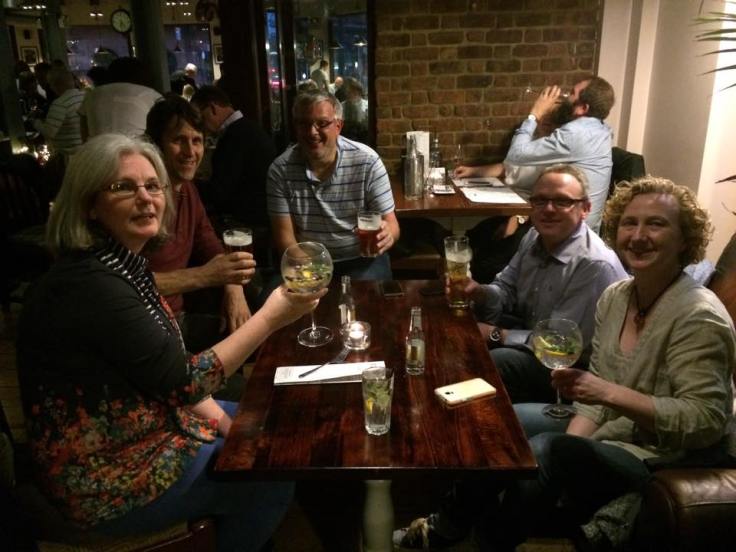 Cath lost her fight just a few days after her 50th birthday in January this year. At least she is at peace and, hopefully, she’s having fun in heaven. Our little group decided we wanted to do something to remember Cath. So this weekend, John, Martin, Sarah, Mandi and I are doing a walking marathon on the Anglesey coastal path over 2 days, raising money for the Brain Tumour Charity. 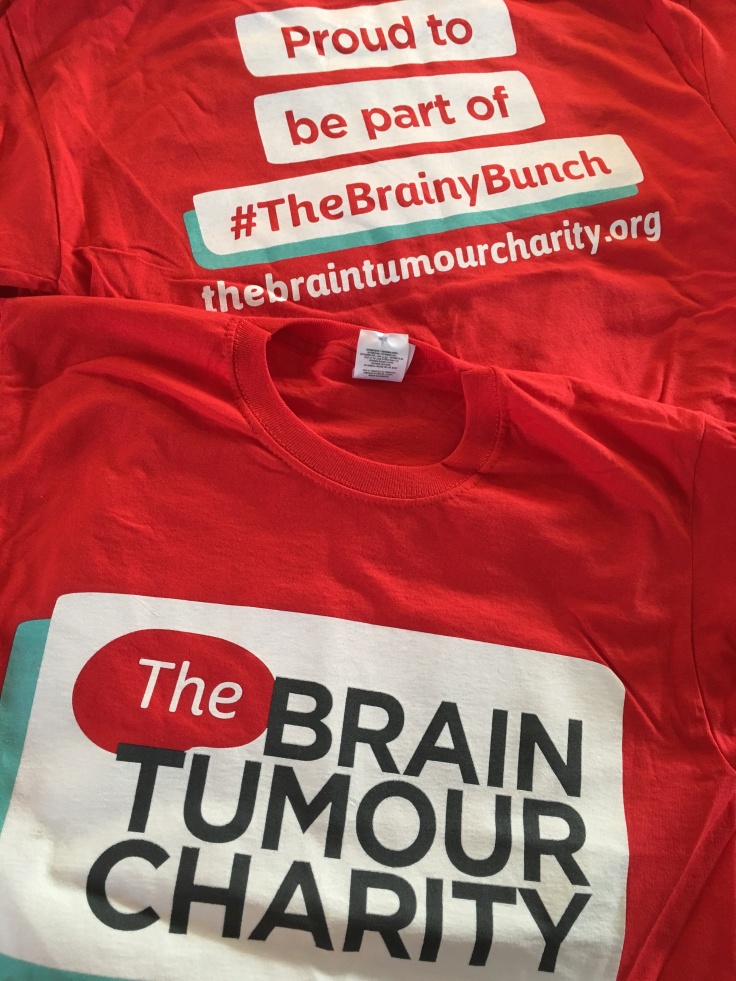 I’m really looking forward to it. It’ll be lovely to see the others, reminisce about our times with Cath, and do our usual eating and drinking. The walk will be a challenge but the forecast looks good and the area is stunning. Sarah is putting us up and we’re walking from Church Bay to Holyhead on one day and Holyhead to Treaddur Bay on the other day. If anyone would like to donate, we have a JustGiving page. Thanks to everyone who has donated already. I’ll let you know how we get on.

2 thoughts on “In memory of my friend”