To make a marathon length walk, today we needed to walk about 14 miles between Holyhead and Church day. The route would be easier than yesterday, with few hills, which was a good thing because some of us had very achy legs and sore feet. Sarah also had a nasty blister, but she wasn’t going to let that stop her.

The routine was the same as yesterday… wash and dress, eat breakfast, make sandwiches, pack rucksack. It was colder today with quite a strong breeze, so we needed warmer clothes than yesterday. Before we left, we pinned a rather crude picture of our friend John to one of our packs. Unfortunately, he wasn’t able to join us for the walk, but at least he could be with us in spirit! 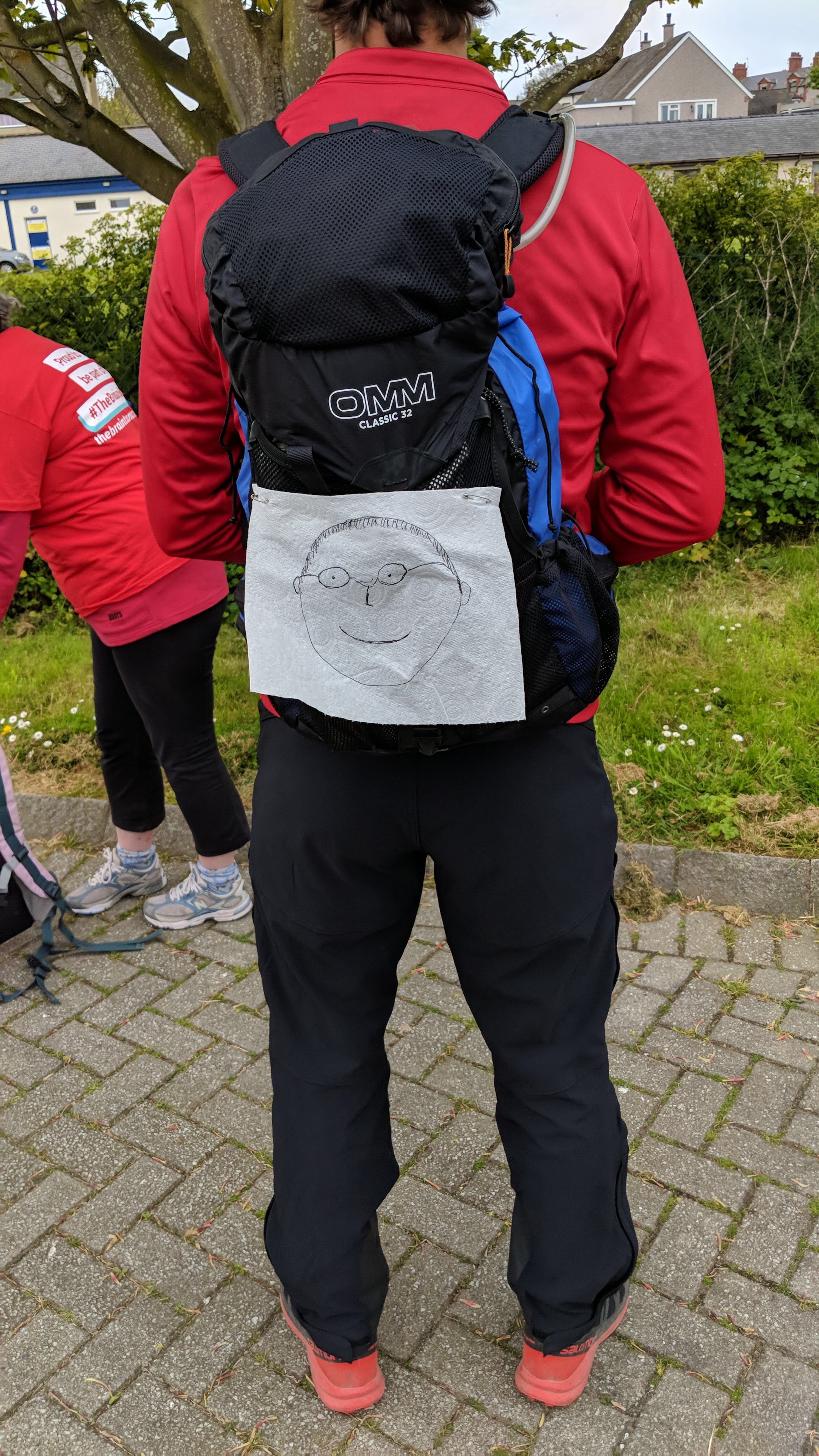 We then drove down to Church Bay to leave Mandy’s car where we expected to finish, before going on to Holyhead in Sarah’s car. We parked where we’d finished walking yesterday, at Sarah’s workplace at Holyhead Coastguard.

As soon as we’d set off walking, a roofing van pulled up next to us and asked if we were walking for charity. When we told him we were walking for the Brain Tumour Charity in memory of our friend, he passed us some money. The two cars behind him who had had to stop too, also gave us some change. Fantastic! 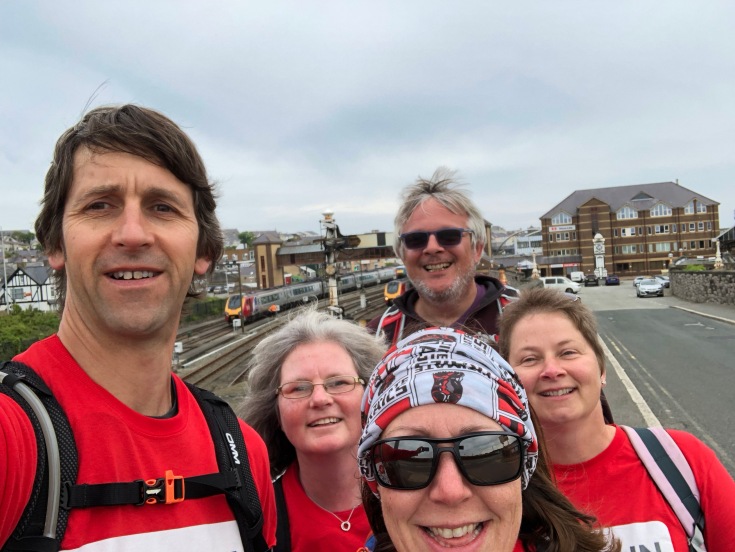 The first part of the walk was through Holyhead and not very scenic… past the port, the railway station and various run down buildings. We stopped at Lidl for a wee but unfortunately the toilet was out of order, so we just bought chocolate instead! We’d have to find a bush to wee behind! 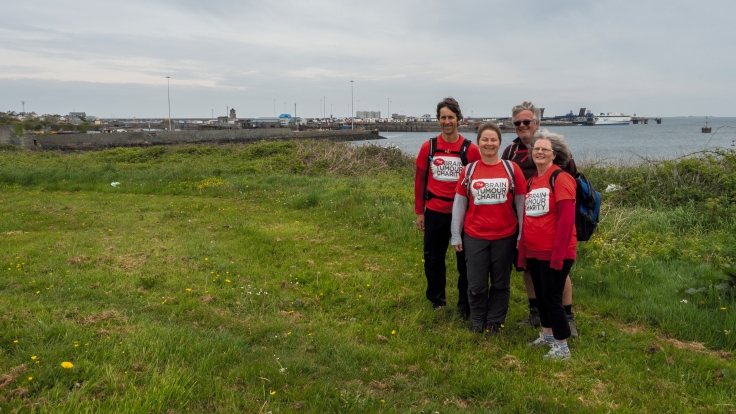 The path then left the road and followed the coast through grassland. It still wasn’t very scenic but we could watch the ferries docking, and see the mainland and the bay where we’d be finishing miles away. John and Sarah stopped to chat to a couple who were on their first day of walking the whole Anglesey Coastal Path and they gave us some more money. Wearing our T shirts definitely helped us raise extra! 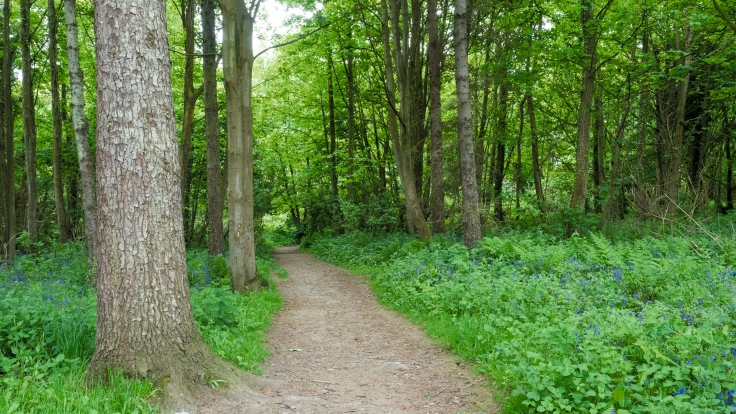 After a while we came to Penrhos Country Park. We passed through pretty woods carpeted with bluebells before heading uphill to a monument and lovely views towards Holyhead mountain and yesterday’s walk. 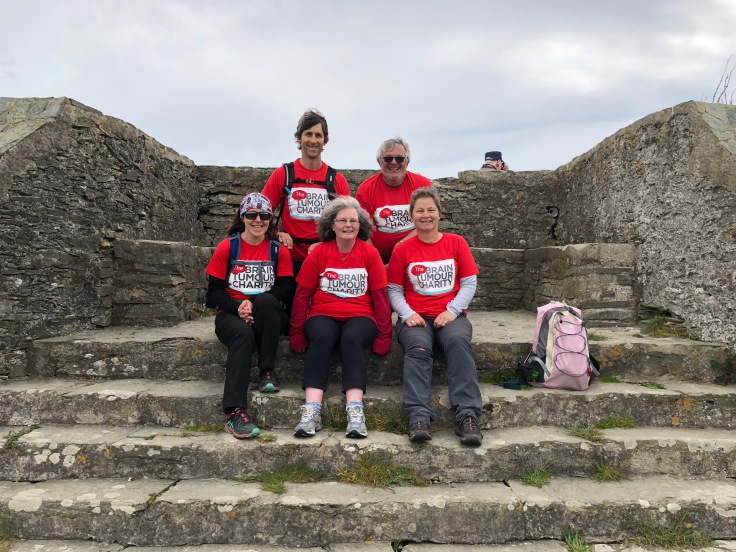 The tower from the old aluminium works stood out. In fact, we could see it all day, as in the photo lower down the page. 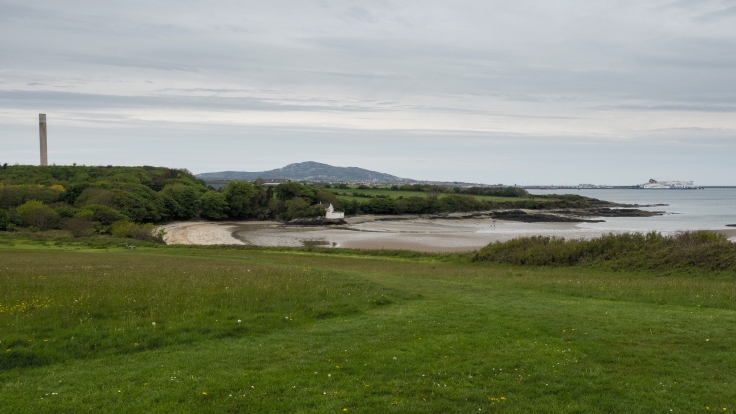 After walking through woods again, this time carpeted with wild garlic and with a lovely little pet cemetery, we came across Pete’s Burger Van. Yes! I could just eat a bacon butty! And what a bacon butty it was… lots of bacon, cooked well, just how I like it, with no fat. We were also given free drinks because we were doing a charity walk, which was a lovely gesture. People really were very kind to us today. 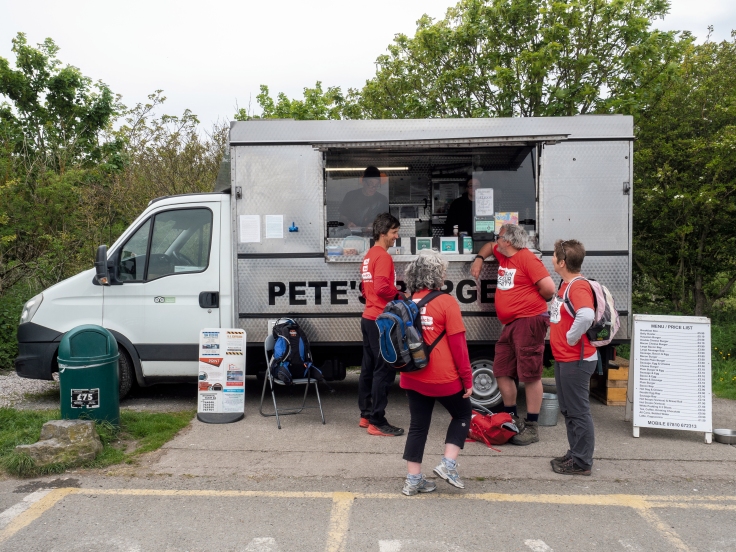 After taking the opportunity to use the toilet, we carried on walking, now crossing Stanley embankment, leaving Holy Island and reaching the main island of Anglesey.

We turned north, following the coast. The path along the shoreline was very rocky and difficult underfoot and our progressed slowed. After a while we reached a sign advising us not to ‘loiter’, where the owner of the house on the edge of the beach had built two lines of rocks to try and deter people walking past. We were pretty sure he couldn’t stop us walking through as long as we were below the high tide line, so we climbed over the barriers and carried on as he glared at us from the window, cup of tea in hand. 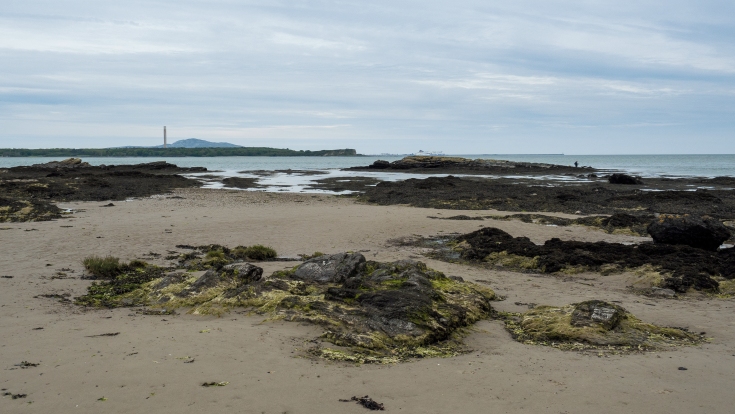 It turned out that we should have turned off the beach before his house and we’d ended up going a long way round, but we didn’t care… it was worth it to wind him up! Plus it distracted us from the fact that we were getting tired and our feet and legs were sore. To me, it seemed sad that someone could get so wound up about a few walkers that they’d put up signs and build rock barriers. I can’t see that that particular part of the beach was ever very busy… there were far more beautiful places nearby! 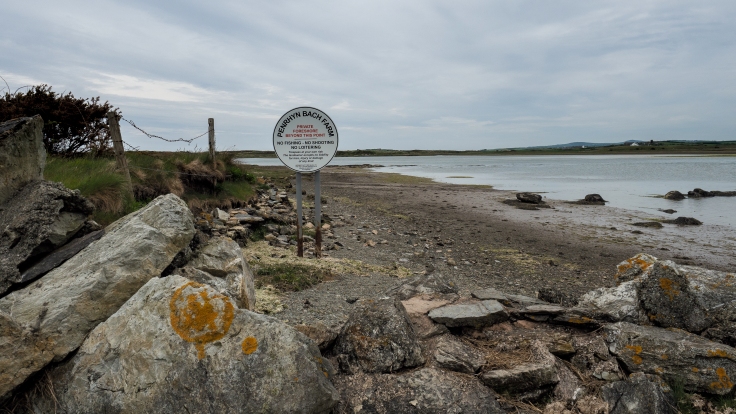 We had to pass inland around the mouth of a river now. This seemed to take forever but finally we reached the bridge across the river. We decided to stop and shelter out of the wind by the bridge and have something to eat. Hopefully, that’d give us more energy again! 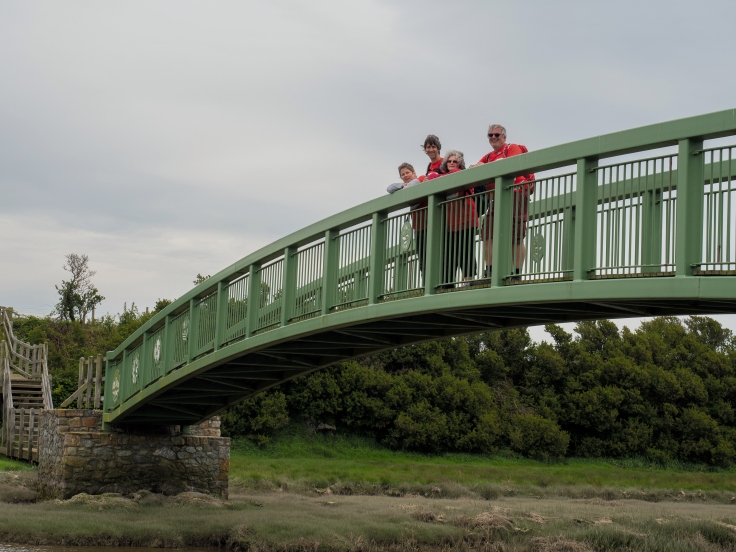 After lunch, it started to rain a little so we put our waterproof jackets on. The path was now through fields and farmland before we reached the shore again. We kept plodding along a sandy beach, just putting one foot in front of the other, chatting and trying to distract each other from any aches and pains, and the hours of walking that we still had ahead of us. 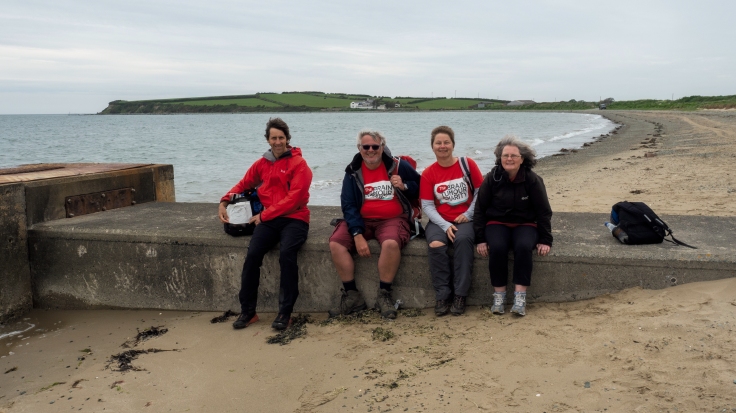 Sarah then spotted her hubby Dave ahead of us with Malin, their collie. Malin came with us yesterday but, because he’s still very young, he couldn’t join us today. Although Malin was very tired and, uncharacteristically, fell asleep every time he stopped, he loved racing up and down the beach, playing ball. The views were beautiful now, as the path wound up and down over cliffs between pretty sheltered bays. Although the View Ranger route I’d downloaded said it was 14 miles from Holyhead to Church Bay, it had now become obvious it was quite a bit further. Some of us were very tired and we all had quite sore feet now, so we decided to stop earlier, when we’d completed 14 miles. We all had different distances on our GPS watches, but agreed to keep going until we were all happy we’d completed 26 miles over the 2 days. 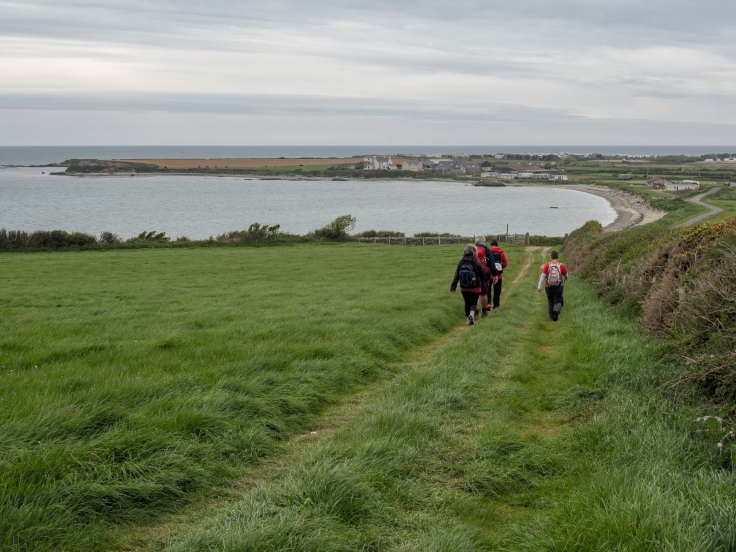 Dave kept driving ahead to the next bay, and each time, we sent him off again because we needed to do more. Finally we agreed… just over this headland… then we’re done! 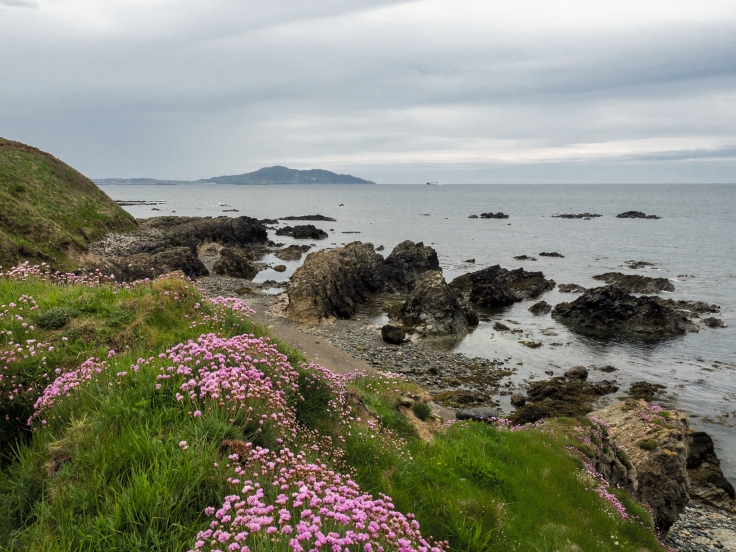 We ended in a small bay, where a large boat appeared to be beached at the far end. We wondered what its story was. 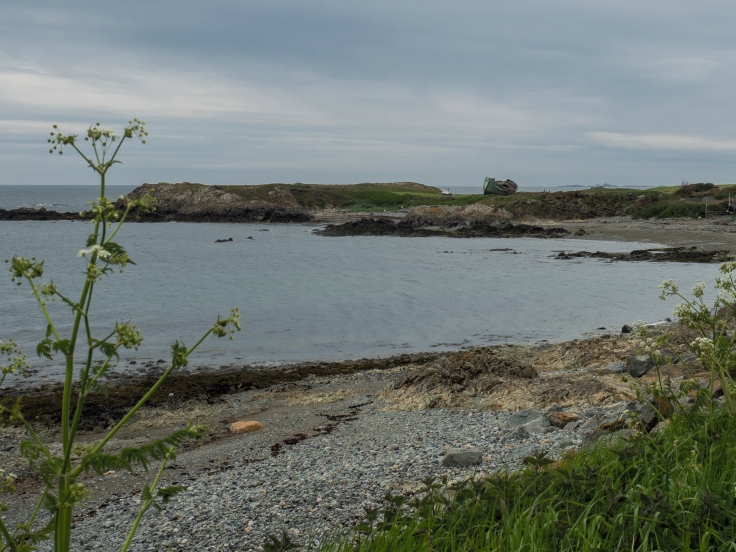 Dave took our photo as we celebrated finishing, then we jumped into the Land Rover and drove the short distance to Church Bay to collect Mandy’s car. 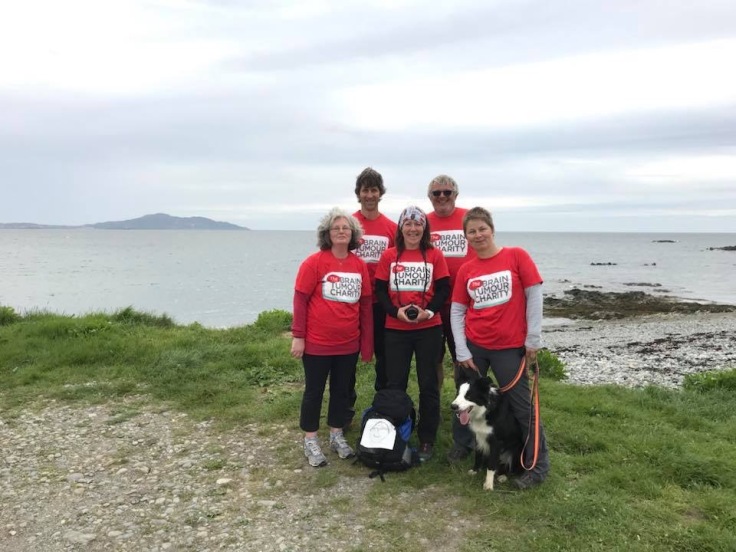 After tea and beer back at Sarah’s, and another toast to Cath and our absent friend John, we set off home. I’m very proud of my friends for completing the 2-day walk. Most of them have never done nothing like this before. 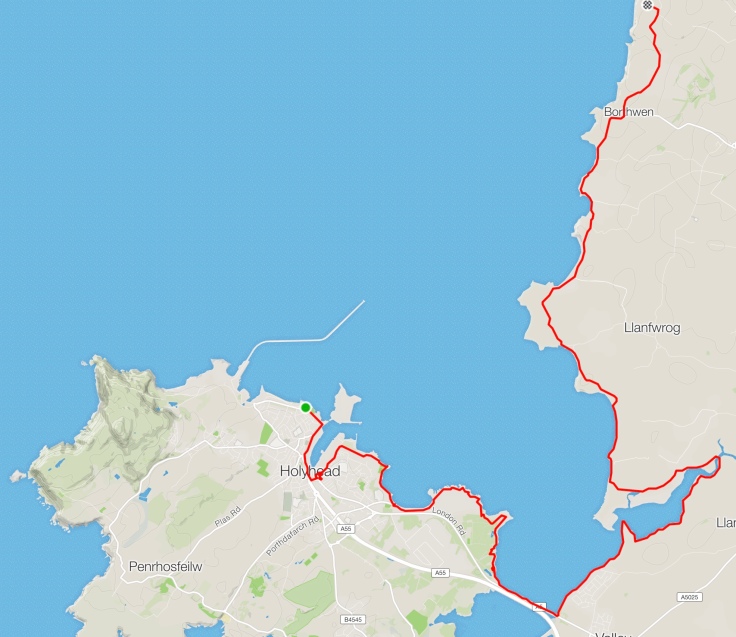 I’m amazed by how much we’ve managed to raise for the Brain Tumour Charity… over £1700 between us so far! Thanks very much to everyone who’s donated. We really appreciate it, and I’m sure Cath would too. I like to think she’s been watching us all weekend, enjoying the whole experience, proud of what our little group has achieved.