I thought I’d had a rubbish night’s sleep in the cabin but Fitbit says I had 7 hours sleep. I initially dozed off but then started hearing noises. I worked out that some were just the wood crackling on the wood burner, and the wood burner cooling, but I was still convinced I could hear animals in the cabin. It was so dark, my mind was working overtime. I was sure I saw a dark shape move near my bed, and a plastic bag beneath my bed definitely rustled! I knew I was probably imagining things… even rats running over the roof… so I didn’t dare wake John and Richard up. At about 1 o’clock, I decided to read my book on my iPad to relax my mind and, about an hour later, I decided I was ready to sleep.

After that, I woke a few times, needing a wee. However, I was lovely and warm wrapped up in a duvet wearing jogging bottoms and a sweat top, and I didn’t dare go outside on my own in the pitch black darkness with the unfamiliar Tassie wildlife. Therefore, I made myself go back to sleep. Finally, I heard someone else move and worked out it was Richard. It was now 6 o’clock and freezing cold because the fire had burned out a few hours ago, so I pulled my insulated jacket, hat and hut socks on, and went through to the living room. Richard was relighting the wood burner and I took the key, unlocked the doors and went outside to the toilet.

I then read in bed for a bit while the fire got going and, when John got up, we all had breakfast, washed and packed, ready to leave and visit the Gordon Dam. The dam is an 140m high concrete arch, which helps Gordon Power Station provide much of Tasmania’s electricity. 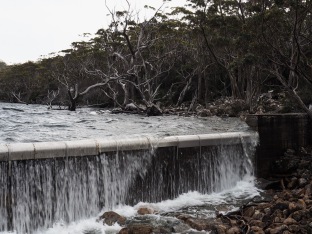 Before this, on the way back to drop the keys for the cabin back at the Mount Field visitor centre, we stopped at Lake Fenton, where there was a small dam that the water was washing over in the wind. We also stopped and did a short woodland walk and read about the wide variety of plants and the rock river, which is moving very, very gradually down the hillside over millions of years. 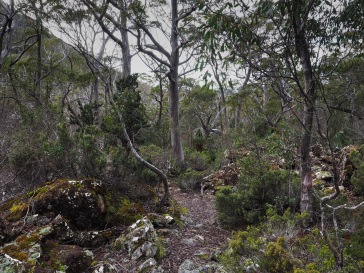 The journey to the dam was long and very winding. John isn’t a great passenger on these types of road and was pleased when we stopped to get out and look at the view, firstly at the highest point on the route, then at Lake Gordon, then at Lake Pedder. 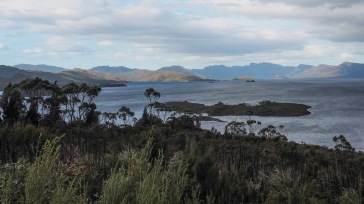 The combination of Lake Gordon and Lake Pedder is the largest water storage in Tasmania and in Australia, and provides the water for the Gordon Power Station. The water flows from Lake Pedder into Lake Gordon through the McPartlan Pass Canal. Water is then fed through a long vertical shaft from Lake Gordon and sent downstream into the Gordon River through a 1.6 kilometre long tunnel. I was glad we’d made the long journey to see it… It was amazing! 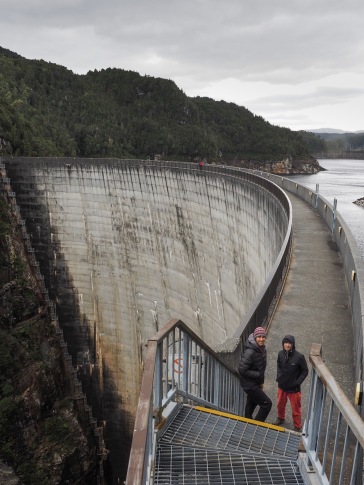 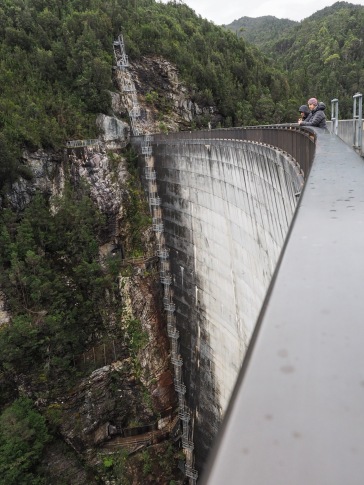 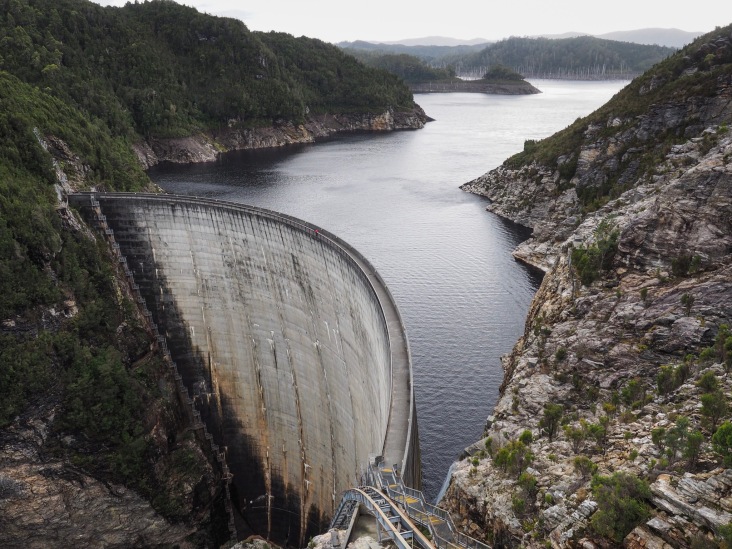 After this, the weather closed in, the wind increased and the rain started. At one point on the way back to Mount Field, there was a small tree down and across the road, which we moved. We hoped the weather wouldn’t get any worse and, thankfully it didn’t.

Following a quick break for lunch en route, we were back at Richard’s by 4 o’clock, tired but happy after a great couple of days. We unpacked, cleaned up and showered. Lexie is still poorly, unfortunately, but we’ve had dinner with Rachel and Thomas, and told them all about our trip. Tomorrow, we’re all going to Bruny Island, which should be fun.