I woke early again… it’s getting to be a bad habit… and waited for John to stir. When he did, I suggested a shower in the harbour facilities before they got busy. That turned out to be a good move. The showers were lovely and when we came out there were a lot more people around and there were people waiting for the showers. Shame we weren’t on hook up and I couldn’t dry my hair properly though. I now have a curly mop!

After breakfast we headed off to Nunspeet, where we are planning to spend the next couple of nights. We found a handy petrol station thanks to Google Maps, then headed over the Afluitsdijk dam. This is an amazing 20 miles long and is part of the system that dams off the Zuiderzee, a salt water inlet of the North Sea, and turns it into the fresh water lake of the IJsselmeer. We stopped at a viewing point on the causeway and it was great to climb the tower and see the scale of the dam. It really is amazing how the Dutch have managed to control the sea and reclaim land. 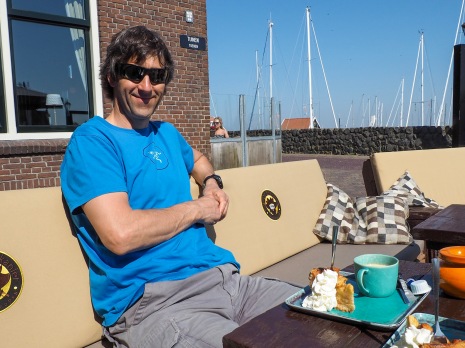 Over the other side of the dam we reached Friesland. At first this was flat and open fields but later it did become very slightly undulating, with more trees. It was all very pretty in the sunshine though. We stopped for a break in Hindeloopen, which our guidebook said is a picturesque old fishing village. I’m glad we did: I loved it! It was very charming, full of little canals with wooden bridges and a variety of old houses. There was a beach the other side of the dyke and a small harbour full of sailing boats. Oh, and a pretty church with a leaning tower! 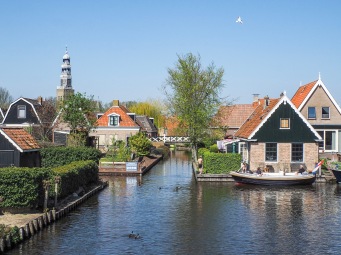 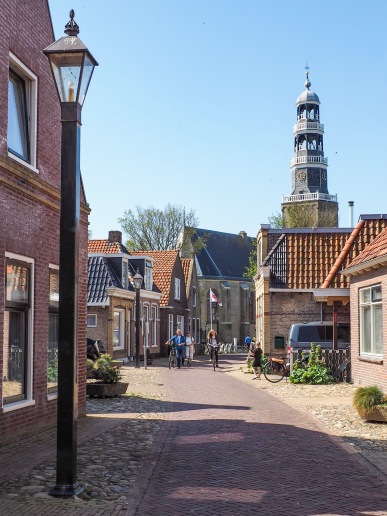 After a stop for coffee and apple pie, we wandered back to the van through the narrow streets and set off for our next stop, Urk. This is in the next province, of the Netherlands, Flevoland, across yet another dam. It’s a much bigger fishing village than Hindeloopen, but still well worth a visit. Until the Zuiderzee was drained, Urk was an island and it still has its old village centre, several colourful fishing quays, and a lighthouse on a hill. 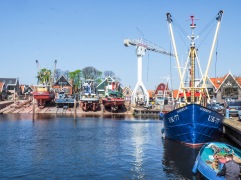 It’s a good job we’re doing a lot of walking and cycling because we stopped for more food… delicious mustard soup for me and a platter of 4 types of smoked fish for John. Then we wandered back through to the campervan, which we’d parked at a camperplaats at the harbour with many other motor homes. Everywhere is very busy because it’s Easter and the weather is beautiful. 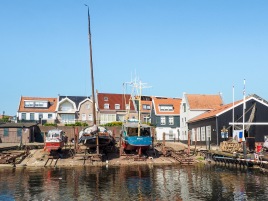 The last part of our drive was through the low lying polders of Flevoland where we saw glimpses of the striped, vibrant coloured bulb fields that I want to cycle through tomorrow. We’re now on the camperplaats in Nunspeet. It’s been lovely to sit in the sun and make plans for the next few days. We’ve used the awning for the first time, and the fly screen. Who would have guessed we’d still have the doors and windows open at 21.30 in April?!