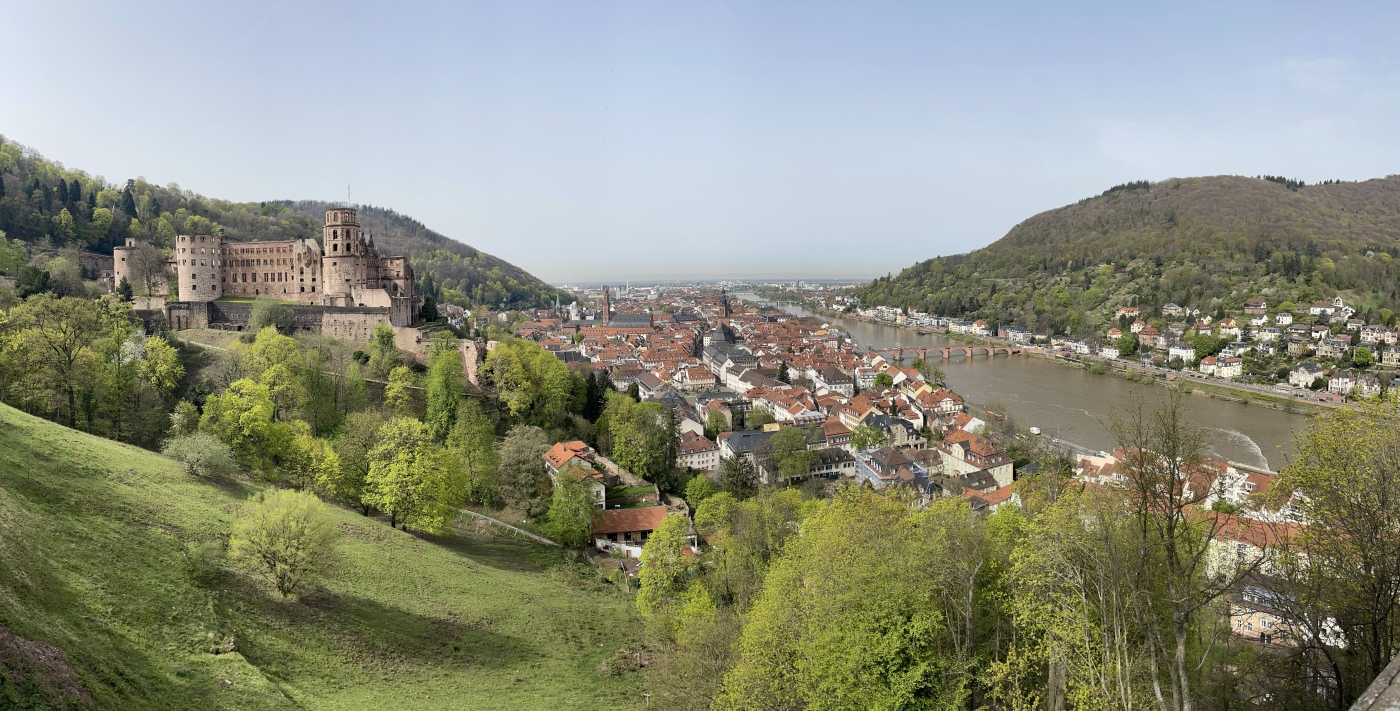 I had 9 hours sleep last night… 9 hours! I’ve been constantly tired for a few weeks and now I have a cold, so I must have needed the rest. Worried my cold might be Covid after being close to others in lifts on the ferry and in queues elsewhere, I did a test… thankfully it was negative.

After a very early night, we woke early and enjoyed watching a woodpecker and red squirrel in the garden of the winery where we stayed. Those cute little squirrels move so fast, I only managed a blurred photo!

We then drove to Heidelberg. Having missed our turning for the palace, we ended up taking poor Bertie into the old town then up and around several hairpin bends until we, eventually, found the car park.

Much of Heidelberg Palace is in ruins now, but it’s still stunning and well worth visiting. It’s high on a hill looking over the old town and the Neckar river, set in a picturesque landscape.

We spent an hour or so wandering around the grounds, looking up at the walls towering above us, and down to the city below.

We then paid to go into the inner courtyard where we saw a couple of huge barrels and visited a pharmacy museum. That brought back a few memories, even though I don’t consider myself old!

A ride on the funicular railway to the old town was included in the price of the palace courtyard ticket. There was a long queue so we decided to walk down and get the funicular back up the hill. We wandered down cobbled streets to the market square, surrounded by beautiful old buildings, and chose a cafe for lunch. It was very relaxing watching the world go by.

The train on the funicular was very modern, although the railway was completed in 1890. It travels steeply uphill, with much of the first section in tunnels in the hillside.

Back at Bertie, I set the sat nav for Ludwigsburg. Unfortunately, we ended up in a traffic jam for about 45 minutes, due to roadworks and possibly an accident too. This meant we were too late to visit Ludwigsburg Palace today. However, we managed to get an overnight parking space alongside several other campervans and motorhomes.

We’ve been to Lidl to top up on shopping, cooked tea, and had a wander through the park. I was excited because John offered to take me on the big wheel but, unfortunately, it was full of people drinking wine and having dinner!

Tomorrow, we’ll visit the palace, then head off to Tubingen where we hope to stay for a couple of nights. Ambulances keep flying through the city with their sirens screeching… I hope they’re quieter when I’m trying to sleep!