We had a better nights’ sleep in our single beds, after a lovely meal and a litre of wine, enjoying the company of various French people, including a young couple who spoke good English, who slept in the upper section of our bedroom. John was excited to have toast for brekkie, rather than plain bread, while I enjoyed muesli and pain au chocolat.

We then set off along the river Guil to La Monta (1661 metres) before a steep unrelenting climb to Sommet de la Lauziere at 2576 metres.

I was glad we were doing this ascent before it got too hot, and that the earlier part was in the shade of the trees. We enjoyed a bite to eat at a good viewpoint before the final uphill pull to the summit, while taking in the beautiful scenery.

After the summit with its two cairns, the walk continued along a beautiful ridge, Crete de Gilly, undulating then falling quite steeply to Collette de Gilly (2366 metres) above Abries.

We had decided to cut this day shorter than we’d originally planned, leaving out a diversion to the interestingly named Col d’Urine because the ascent was already substantial. Also, we hadn’t realised how much it would affect out bodies carrying heavy rucksacks for 4 days. Therefore, we had plenty of time to climb the Sommet de Gilly… 2467 metres high and relatively small for this area!

When we got back to the col, which was quite windy, we found a sheltered spot to have our lunch and rest for a bit. We also had a chat to the French couple when they came down from the ridge, before we set off for Le Roux.

The path wound downhill through meadows and forests and over streams, and it seemed to take a long time to get to Le Roux. Unfortunately we missed the direct path to the village and ended up having to follow the steep hairpins up the road. We then took a ‘shortcut’ to the centre and ended up missing the sign to Gite de Cassu, where we were staying, struggling to find the entrance!

There was nobody at the Gite but a sign said which room we were in and advised us to go in. We showered and then waited for someone to come back so we could have a drink. There was no need to do any washing because the trek was coming to an end. We were in a double bunk bed but luckily, again, we didn’t have to share our room. 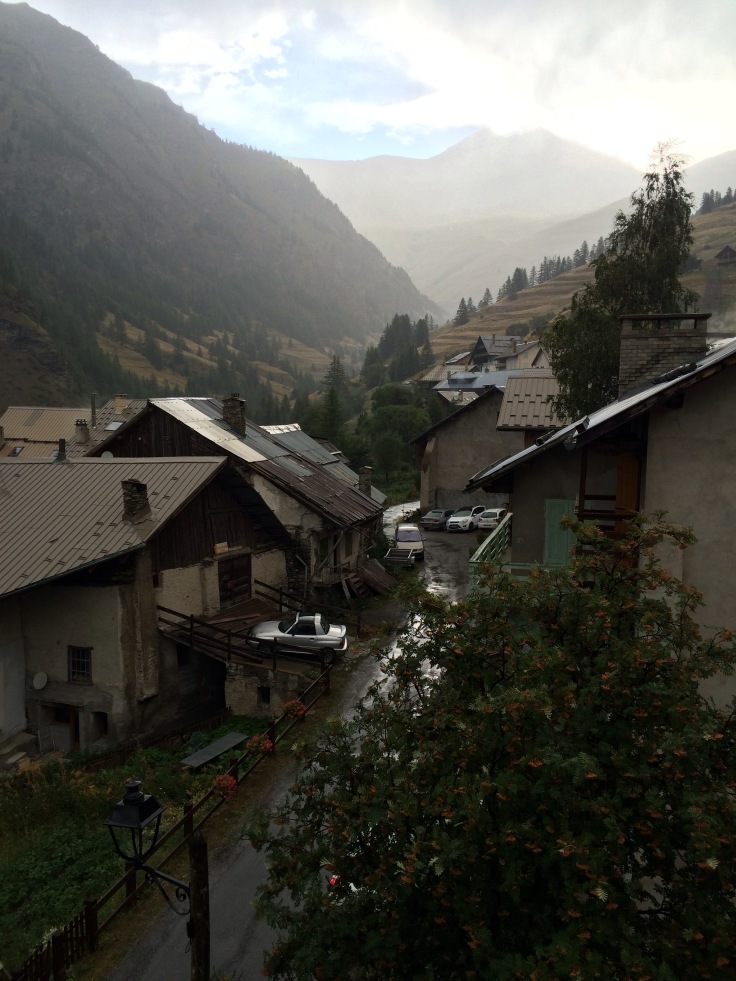 This evening we shared a table with a French couple whose English was as poor as our French. We also met a Canadian guy who had been driven to use the Gite because he was sleeping under a tarpaulin each night and it was raining heavily. We’d been lucky to avoid the downpour. The food was great again… Goats cheese salad, pork chops with a mustard sauce, green beans and sautéed potatoes, and praline tart, which wasn’t as nutty as we expected and was bright pink but very tasty. I love French food!