I couldn’t wait for the night to end. I kept waking every every hour or so and struggling to get back to sleep. Although the room was freezing, I was snug in my sleeping bag and my ear plugs reduced the sounds of the others snoring and high altitude farting… A recognised condition! However, as the night went on my head started pounding and, in spite of taking some painkillers, worsened as dawn approached until I also started feeling nauseous. I kept drinking the water that I’d kept by my bed, as we’d been advised the best way to avoid getting acute mountain sickness was to stay hydrated, but it didn’t seem to help.

As the light started shining through the window the others started to get up. I felt more and more sick, and my tummy got more and more painful until I went through to the bathroom and threw up. The smell of the toilets didn’t help… We had to put the used loo roll in a bin by the toilet instead of flushing it and, after an evening and morning of us all doing our ablutions, you can imagine what it was like!

We’d been told to tell Paul or Pete, our mountain leaders, if we had any symptoms of acute mountain sickness so I told Paul. We dressed and went down stairs, then looked at my symptoms against a scoring system that showed I had a mild to moderate dose of the condition. We decided I’d stay put and take some more painkillers and try and stay hydrated while the others had breakfast and went out to practise some winter skills. I was worried that I wouldn’t be able to climb Toubkal if I hadn’t practised my ice axe arrest but was told not to worry about that. Pete would come back at lunchtime to see how I was and we could maybe do that in the afternoon.

The electricity wasn’t on yet and the fire wasn’t lit, so the room was freezing, but still warmer than the bedroom. I curled up on the bench seat and tried to sleep, although that wasn’t easy when the men were cleaning around me and preparing the fire, or as new hikers arrived. I was sick a couple more times, but tried to drink water and rehydration solution when I felt able too. It felt impossible to rehydrate and improve my headache when I felt so sick though. And if I couldn’t eat and drink enough, I wouldn’t be able to climb the mountain tomorrow.

The others went out onto the hill to look at the snow to learn about avalanche risk, but couldn’t do any ice axe or crampon work because the snow was too deep and powdery after the previous day’s snowfall. A group of Australian lads who had tried to ascend Toubkal came back after giving up for the second time because the snow was too deep. Their preparation was less than ideal. One of them had nasty burns on some of his fingers from slipping and touching the fire the previous night. 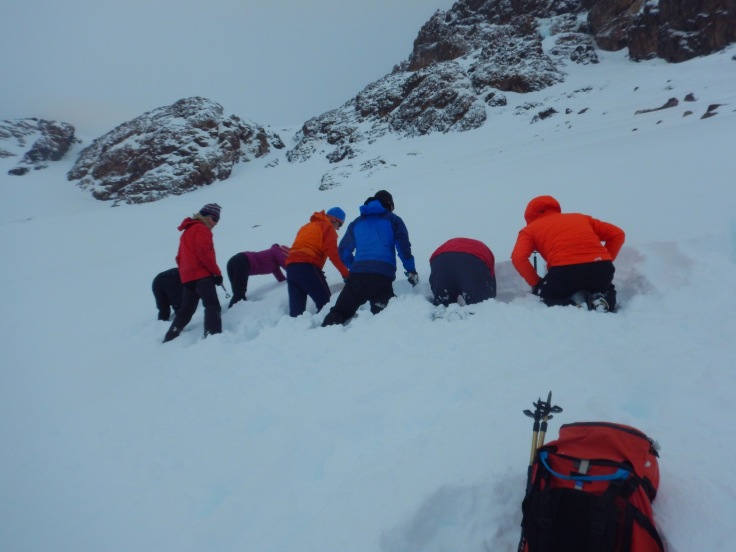 When Pete arrived back, I was feeling really sorry for myself. I knew by now that I wouldn’t be able to climb the mountain but was hoping that John would be able to. Pete seemed surprised I was no better. He went through my symptoms again, wondering as I had, whether it was a stomach bug or acute mountain sickness. We agreed it was probably the altitude. He asked how things had been before the holiday and I told him how I’d had a stomach and chest infection over the 3 weeks before we came away and how I’d hardly left the house in that time. He felt that this is probably why I was suffering more than the others, who just had mild headaches and poor sleep. I was very upset by now as we discussed the options but Pete  reassured me that I didn’t need to worry because, if I didn’t get better soon, at least there were options that would enable me to enjoy the rest of the holiday. He considered that, as my headache was resistant to the ibuprofen and paracetamol I’d taken, I should descend the mountain back to Imlil. If I was able to walk with the help of others, including porters to carry my bags, this was the preferred option, otherwise we’d have to use my insurance and I’d have to be helicoptered out to the medical centre in Marrakech. Hopefully it wouldn’t come to this.

John soon returned with Paul and the others and came to see how I was, expecting to find I felt much better, and concerned that I wasn’t. More tears ensued as Pete explained that I probably needed to go back down to Imlil, and as John said he’d come with me, meaning his summit climb was off too. We then talked things through with Paul. Should we leave now or tomorrow? Rather than dash round now, packing bags and trying to get down the mountain before it got dark, my preference was to wait until the next day. I couldn’t face doing all this while I was feeling so sick, and secretly harboured hope that I’d recover over the course of the afternoon and evening and be able to stay at the hut. At least this way, John would still be able to climb Toubkal.

While I had been distracted talking the options through, and after a bit of fresh air, I had felt a bit better, but after settling back down in the lounge with everyone, I was sick again. I dozed on the bench, listening to the conversations around me, and tried to drink water and suck sweets to get hydrated and maintain some energy. When everyone else had dinner, I just had a small square of dry bread, but even that felt an achievement! Then one of the men in charge of the refuge brought me a hot chocolate and told me to drink it because it’d make me better. It was very sweet but it did seem to help! I hoped again, I might be able to stay at the hut.

No such luck. After dinner Paul came and sat with me and John to tell us about the plans for tomorrow. In the morning, we should pack our kit bags and a porter would take one down tomorrow and another would come down with everyone else’s bags on Friday. Another porter would carry my rucksack, and Pete would come half way, past the worse of the deeper snow, to check I was ok. If necessary, he would come as far as Imlil. We would spend a night in Imlil before going on to Marrakech the next day. I knew that going down was the sensible thing to do… If I got any worse, I’d put myself and others at risk, but knowing this didn’t make it any easier. I felt gutted for John as Paul then discussed the plans for climbing Toubkal with the others. As they all went off to pack their rucksacks ready to start at daybreak, I fought the urge to cry again. John has been fantastic. He hasn’t complained at all, or even mentioned the trek. He has just looked after me. I am so lucky to have him.