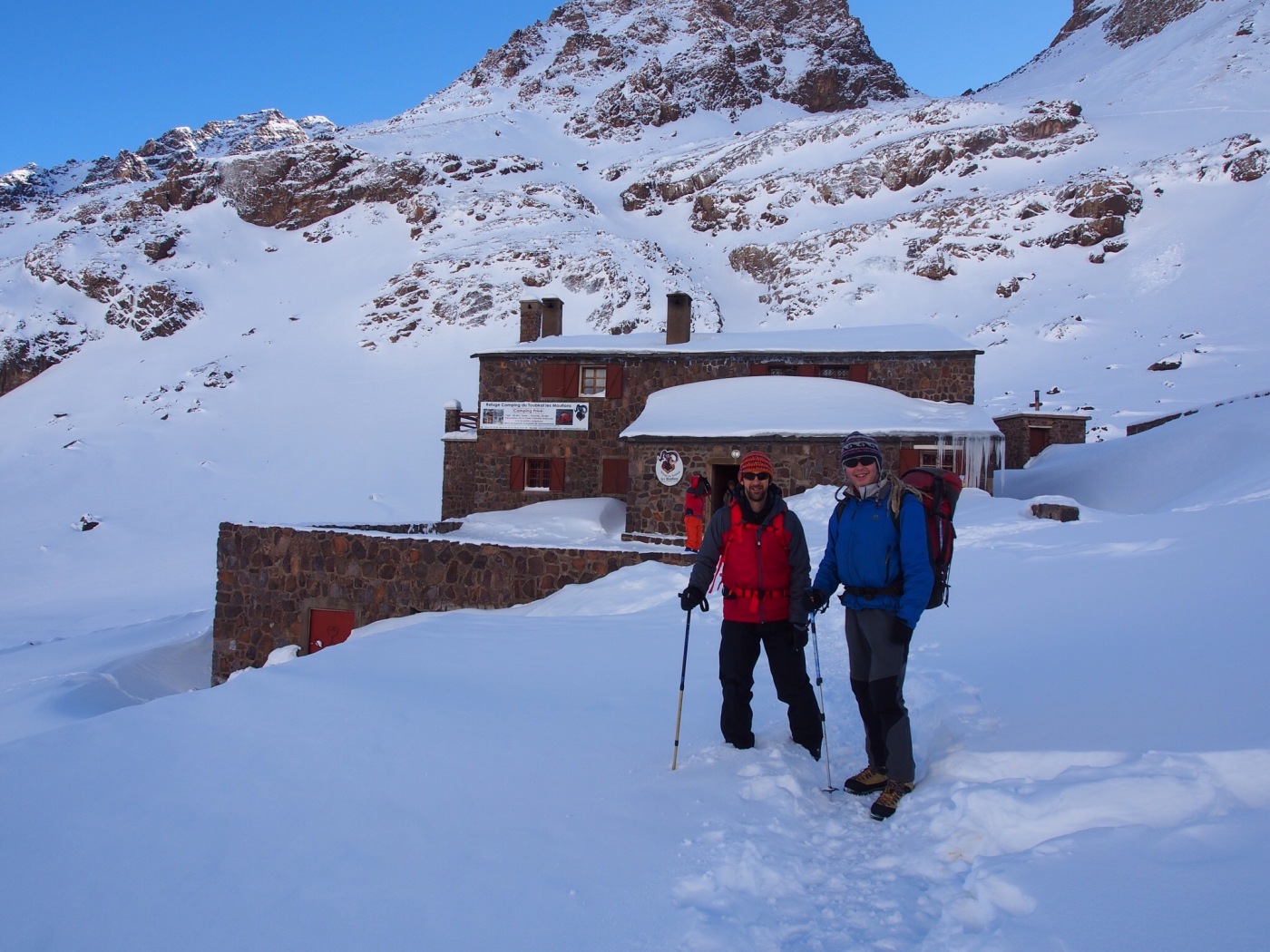 After another bad night’s sleep, I got up at 5.30 to go to the loo and take some more painkillers for my headache. I then snuggled back into my sleeping bag to wait for the others to wake as they had an early start before climbing Toubkal. After a while, I became aware of John tossing and turning next to me. I reached to touch him and he grabbed my hand and asked for the paracetamol. It was his turn for the headache from hell.

When Pete woke up he gave John some ibuprofen, while I went downstairs to try and eat something because my tummy was churning again. Once again, the hot chocolate seemed to help, and I went back to bed to find John was already starting to feel better. Phew! After the others had left to climb Toubkal, Pete, John and I dozed off to sleep again… The best hours sleep I’ve had on the mountain! 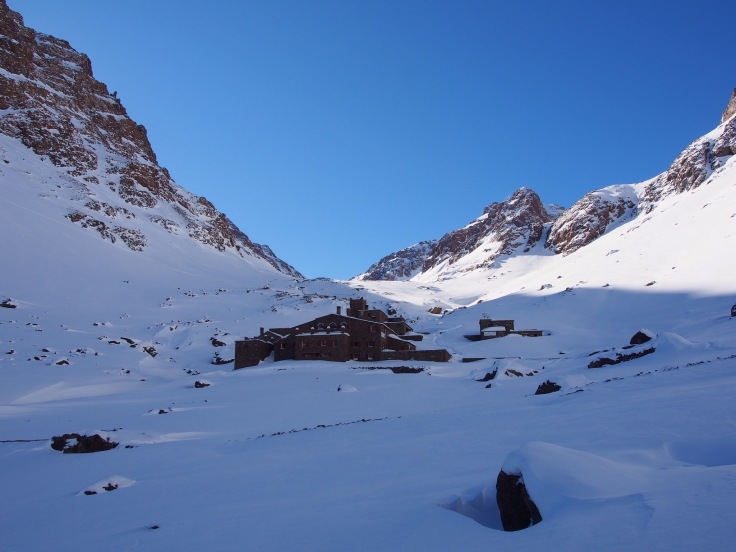 After breakfast, we packed our bags and got ready to leave. One of the porters took the huge, heavy kit bag on his back, and the rest of us had our rucksacks. We hadn’t gone far and I was struggling in the deep snow, so Pete asked the second porter to take my rucksack. This made it much easier for me to concentrate on staying on my feet. I did feel weaker than usual but managed ok after this. 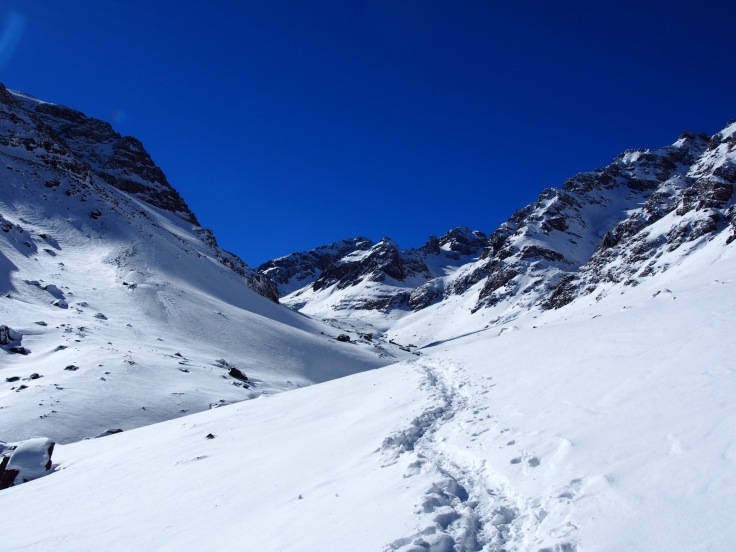 The views were stunning. I may not have climbed Toubkal but I’ve still experienced a beautiful place that many others will never get to see. The weather was glorious and we all removed layers as the sun rose. After a couple of hours of quite difficult hiking, we reached the first hut. Here we stopped for a rest, a lovely, freshly squeezed orange juice and a snack, enjoying the scenery and soaking up the sun. Perfect! 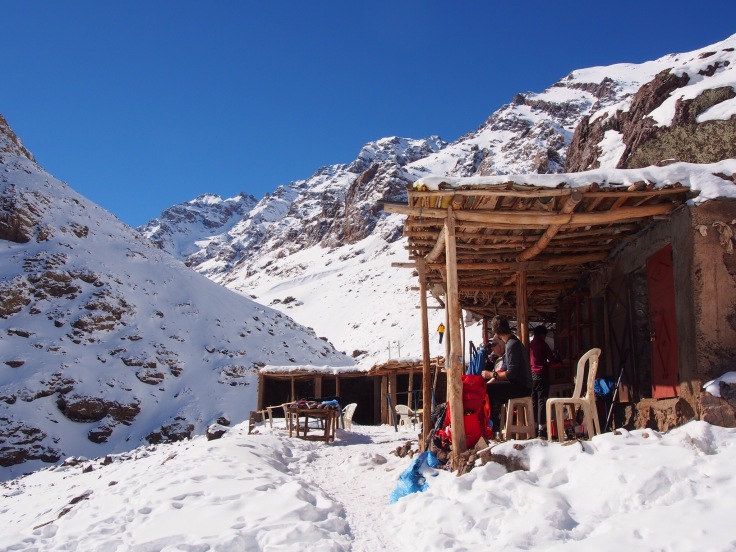 After another hour or so of walking, the village where we stopped for lunch on the way up came into view. Pete asked if I was ok to continue without him, and I agreed I was fine. After the village the path would be easier and it made sense for Pete to turn back… It was going to be hard going for him, back up the mountain in the full sunshine, so we said our goodbyes.

All of a sudden we heard a shout. Pete had twisted his ankle. John went to see if he was ok while I ran ahead and shouted for the porters to stop. Thankfully, Pete decided he was ok, and he had a phone and radio to call for help if necessary, so he carried on back up the mountain. I hope he got back without any further problems. 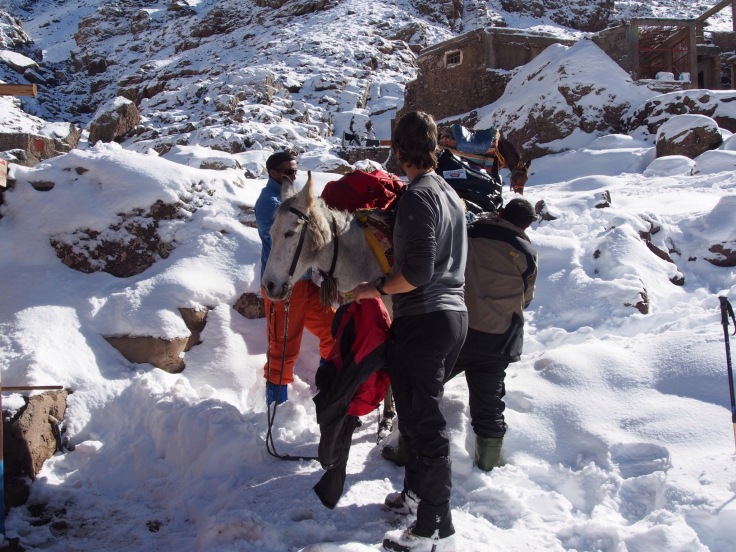 When we reached the village the porters transfered our bags to a donkey. I felt sorry for it but one of the locals quickly reassured me… ‘Donkeys very strong! 120kg!’ Then John asked the donkey’s name… ‘No name! Whatever name you want it! Jacqueline! You call her Jacqueline today!’ he grinned.

We continued through the village with Jacqueline and the path became a bit easier but was covered with more snow than when we’d come up it. After another hour, I was really tired and was wishing I hadn’t worn my leggings under my waterproof trousers. I was so hot and my head was hurting again. John kept passing me the water but I was regretting our decision not to stop for lunch and a rest in the village. The porters had been keen to continue and we were meeting a taxi in Imlil at 3 to take us straight to Marrakech, rather than staying there, so I felt under pressure to keep up. 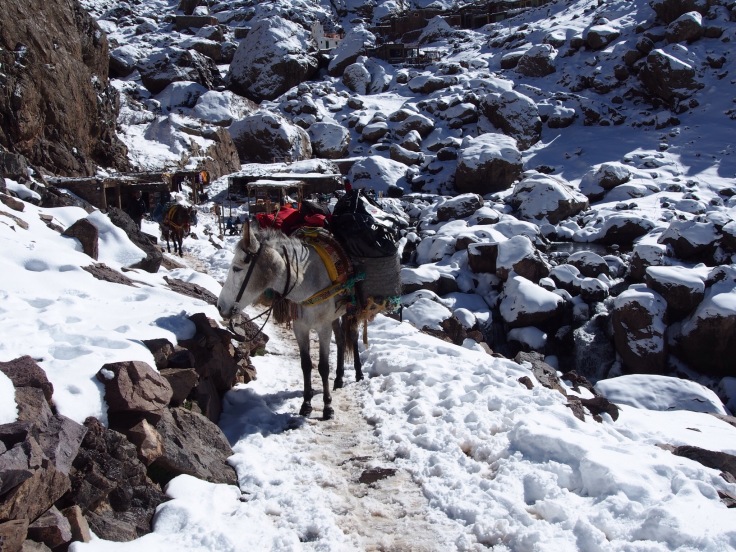 When we reached the valley bottom, we took a different route from that which we took on the way out. One porter had left us by now and the other, Hamid, jumped onto the donkey. The donkey got faster and I struggled to keep up, eventually deciding not to bother trying. Hamid did keep waiting and checking I was ok though. I just wanted to get back to Imlil now, but declined an offer to ride on the donkey!

After a stop in the next village to meet Hamid’s son, we finally reached Imlil, after about 5 hours’ walking, and with 20 minutes to spare. While we were waiting for the taxi, we topped up our water bottles and had some snacks, hoping this would relieve my headache and the nausea that had returned, probably because I’d been out in the sun for so long, insufficiently fed and hydrated after yesterday. John tipped the porter and we thanked him for his help, and I waved away the old man who kept trying to sell me jewellery, not in the mood for bartering!

The taxi journey was uneventful, apart from the driver having a couple of rows with someone we presumed to be his wife on the phone. He did at least pull over to take the calls, even if one time was at a busy junction! I dozed in the back and it didn’t seem long before we arrived in Marrakech. The driver parked up and helped John carry the bags to the riad. Another tip!

It was very strange coming from the peace of the mountains to the chaos of the city, and walking through the busy streets to the riad in our hiking boots, muddy trousers and sweaty tops. We felt very out of place and I was quite overwhelmed as we dodged the cars, scooters and horse drawn carriages, and picked our way through the hoards of tourists and locals. 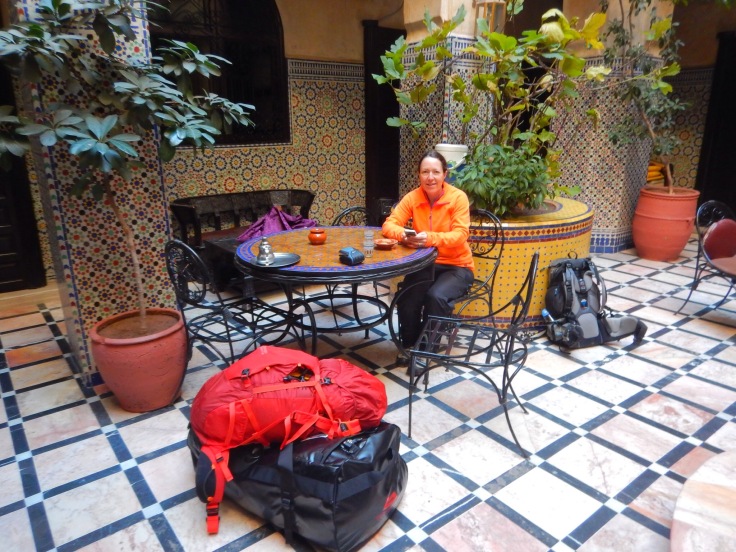 In the riad, we were given mint tea in a calm oasis in the centre of the building, away from the hustle and bustle of the street, while we filled in the obligatory forms. We then settled into our room, which is small and quite noisy but perfectly adequate, and most importantly has a hot shower! Bliss! Time to relax and recuperate. There’s plenty of time to explore in the coming days.

One thought on “20th December: The descent to Marrakech”