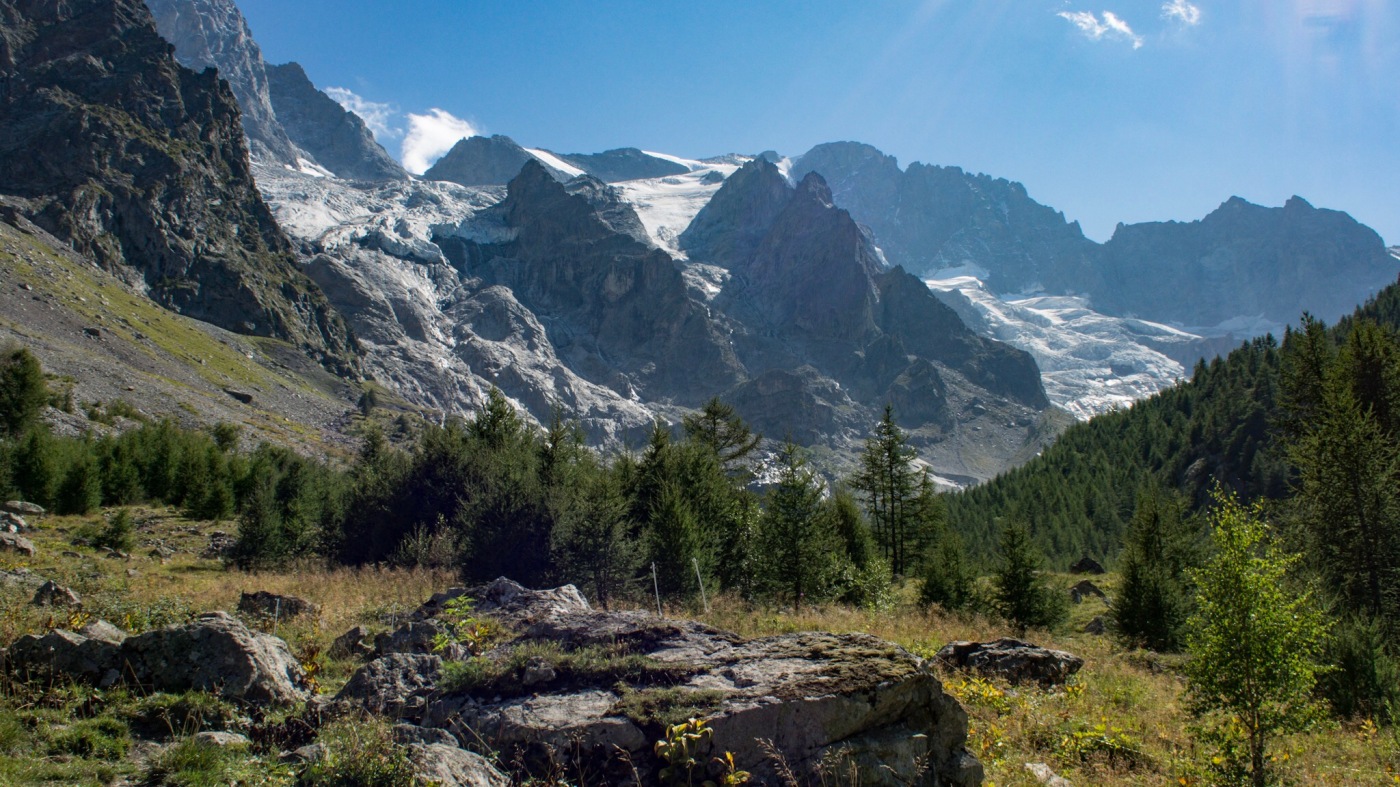 What an epic day! We agreed today’s walk had everything! Cool forest paths, sunny meadows, rivers, a pretty lake, a refuge for a snack, great views over the Meije glacier and, in the other direction, over the valley to yesterday’s hike, glacial rocks and scree, a Breche or gap in the rocks leading to a different landscape, lateral moraine, waterfalls and even chamois!

We’d set the alarm and got going early, while it was still cool. We started along a track by the River Romanche from the campsite, taking a shortcut on a path that disappeared, so we had to scramble up a steep bank! The weather was lovely… sunny with a slight breeze. 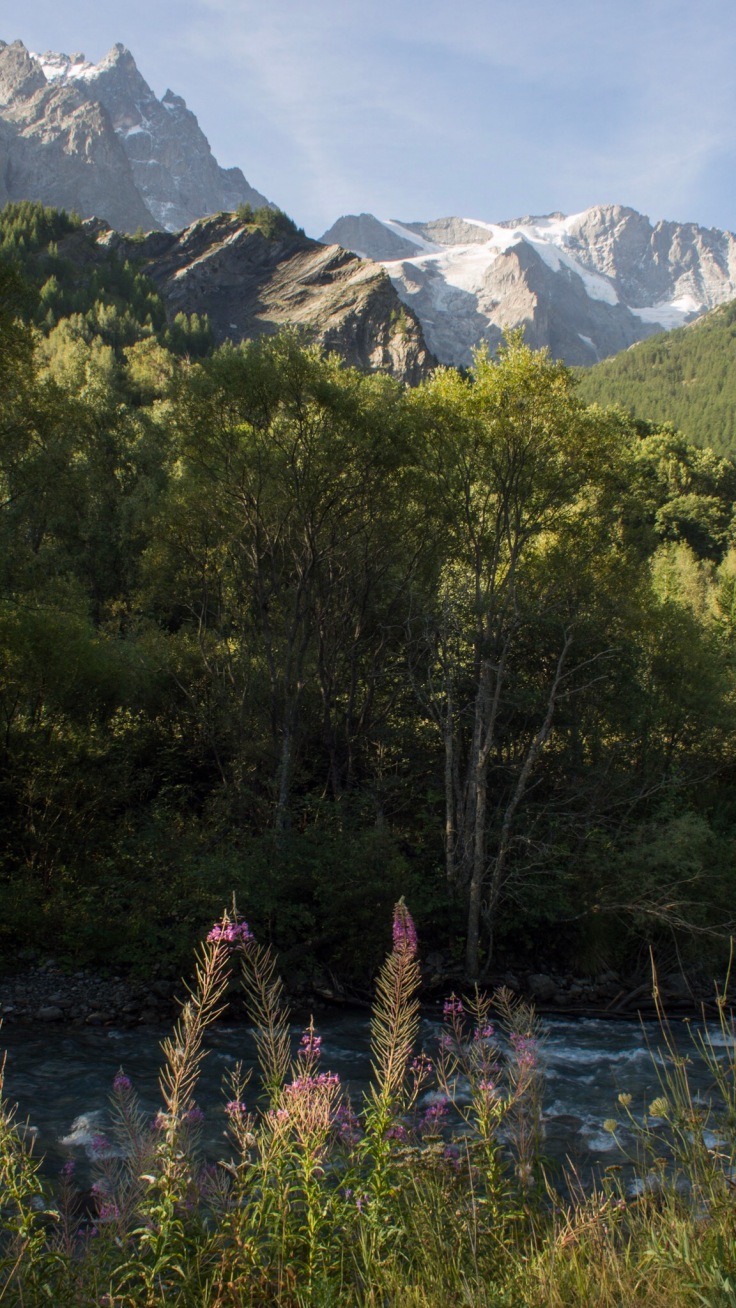 The path went steadily uphill through forest, which was nice and shady, and eventually the trees gave way to open meadows, full of flowers. 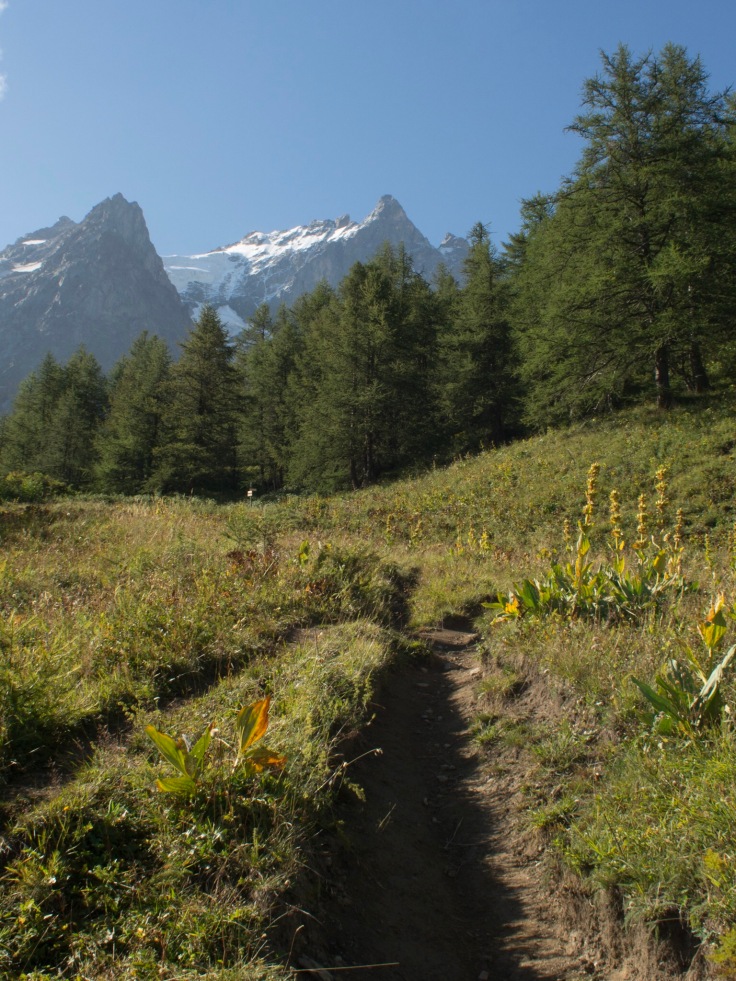 After a couple of hours of relentless climbing, we finally reached the pretty blue-green Lac de Puy Vachier, nestled below high cliffs in a glacial cirque. 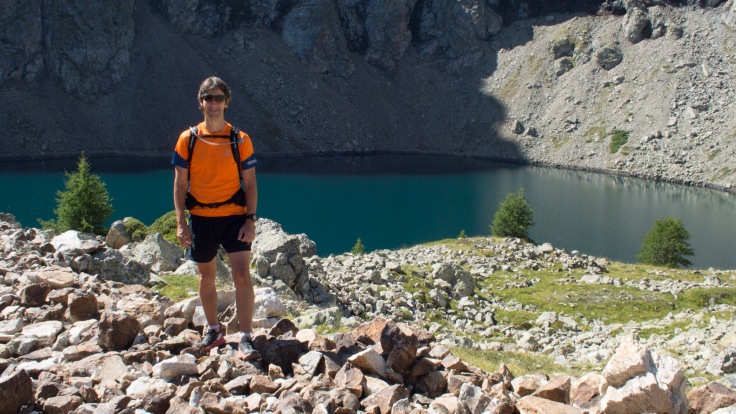 Refuge Evariste Chancel was perched on the hillside above, and the path continued to wind its way steadily uphill to reach it. 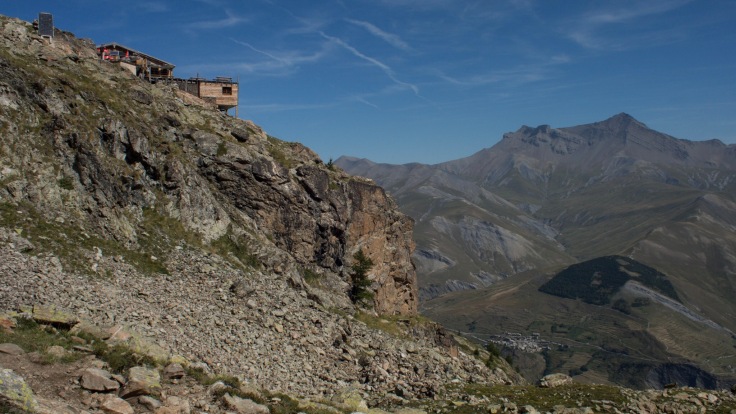 There were great views over yesterday’s walk… including the villages of La Grave, Les Terraces, Les Clots and Ventelon, and the mountain we climbed, Signal de la Grave. 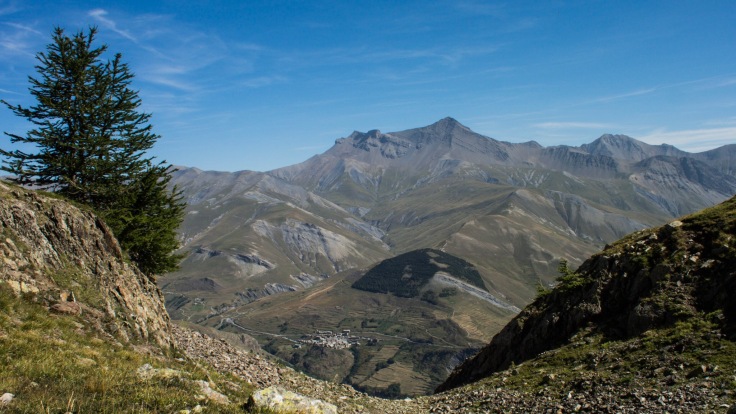 At the refuge we had elevenses… myrtille tart for me and framboise tart for John. From here, we could see Breche Pacave which we were aiming for, at 2836m more than 300m higher than the refuge. 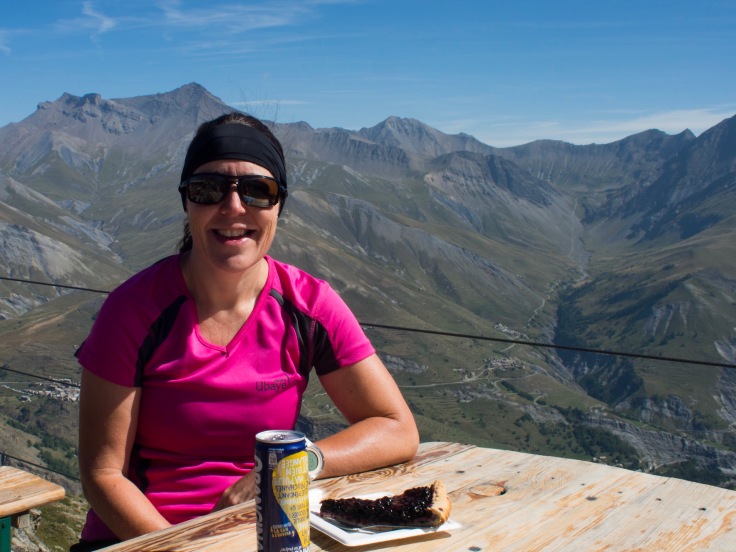 The path now wound its way over rough glacial scree to the Breche. We had to look carefully for the red dots on the rocks, showing the way. At a point where the view over the glacier was good, I had a go at a selfie with my camera. It turned out ok! 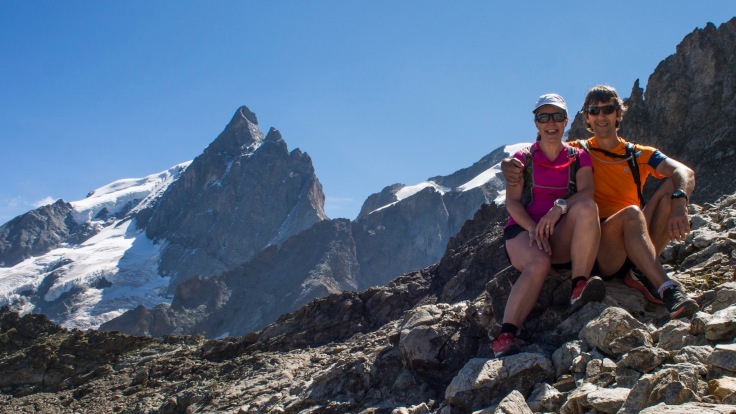 We did it! We reached the Breche and could see all the glaciers directly ahead, and the cable car taking tourists up and down the mountain. 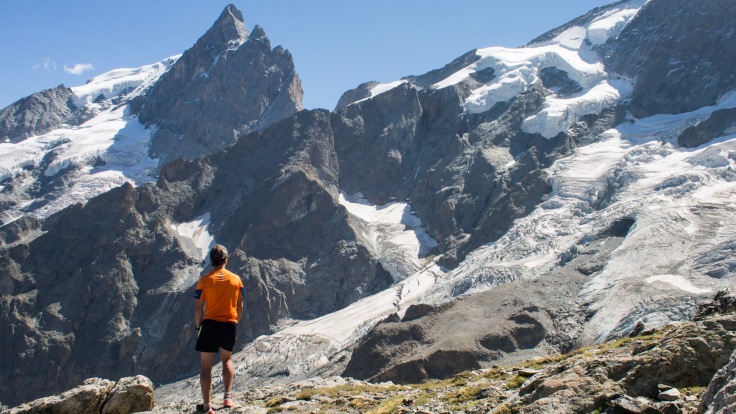 A kind Frenchman took our photo to prove we’d made it, then we sat down and had our lunch, enjoying the spectacular scenery. 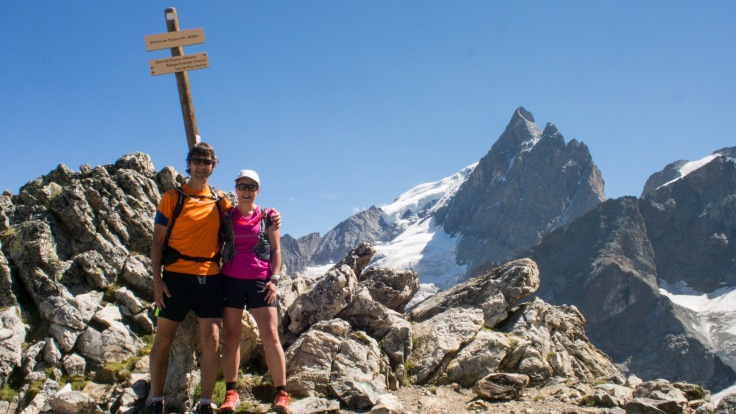 Now it was all downhill, back to La Graves. At first the path went over more glacial rocks and scree, before crossing a plateau where sheep were grazing, their bells ringing. After that, we went up onto a ridge of lateral moraine, a pile of rocks pushed out of the way by the glacier years ago. We’ve never walked along anything like this before… a high ridge of packed scree with steep drops either side, and pretty scary at times… a bit like Crib Goch but without rocks to hold on to! It seemed to go on forever, winding down the valley. John wasn’t keen on the drops, and I wasn’t keen on the loose scree on the steeper bits, but it was awesome! This picture really doesn’t do it justice because it doesn’t show the scale of it. At times we lost the path… we were constantly playing a game of spot the red splodges as we tried to find the next way markers! 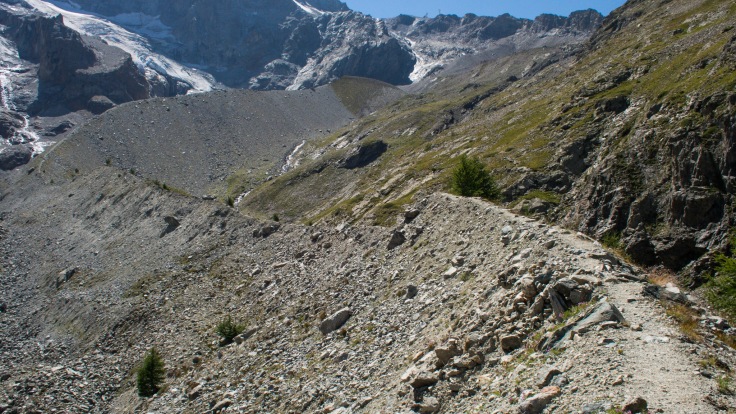 As we walked along the lateral moraine, we disturbed some chamois, who scarpered to the valley below. They’re always great to see.

It was getting very hot now, with no breeze in the valley. I was pleased when we finally, reached the river, hoping it would now be a bit cooler, with a bit more shade. The walking was still very difficult because the path was either covered in loose scree or strewn with boulders. Although there were now some trees, they were sparse and provided little shade. It was lovely to take our shoes and socks off and dip our feet in the river to cool off. Around here, we met other people for first time since the summit. We hardly saw anyone on the whole hike… no more than about 20 people in total… so unlike Snowdonia! 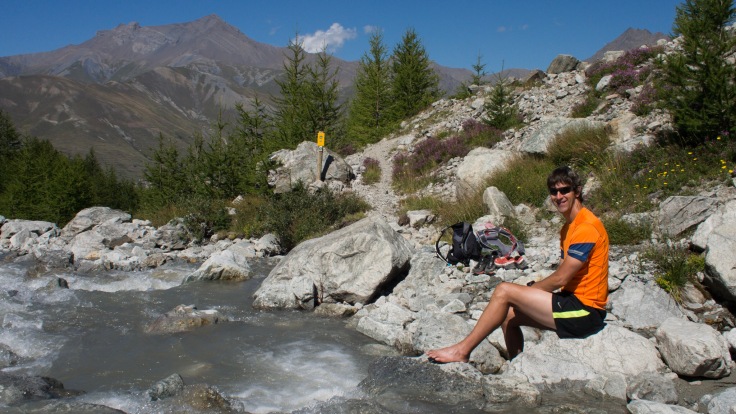 The path continued downhill and, after a while, we came to a meadow where cows were grazing. Here we had an unexpected surprise, finding a path to a waterfall with a bridge over it. The river cut away the rocks forming a gorge from the mountain to the valley. Fab! 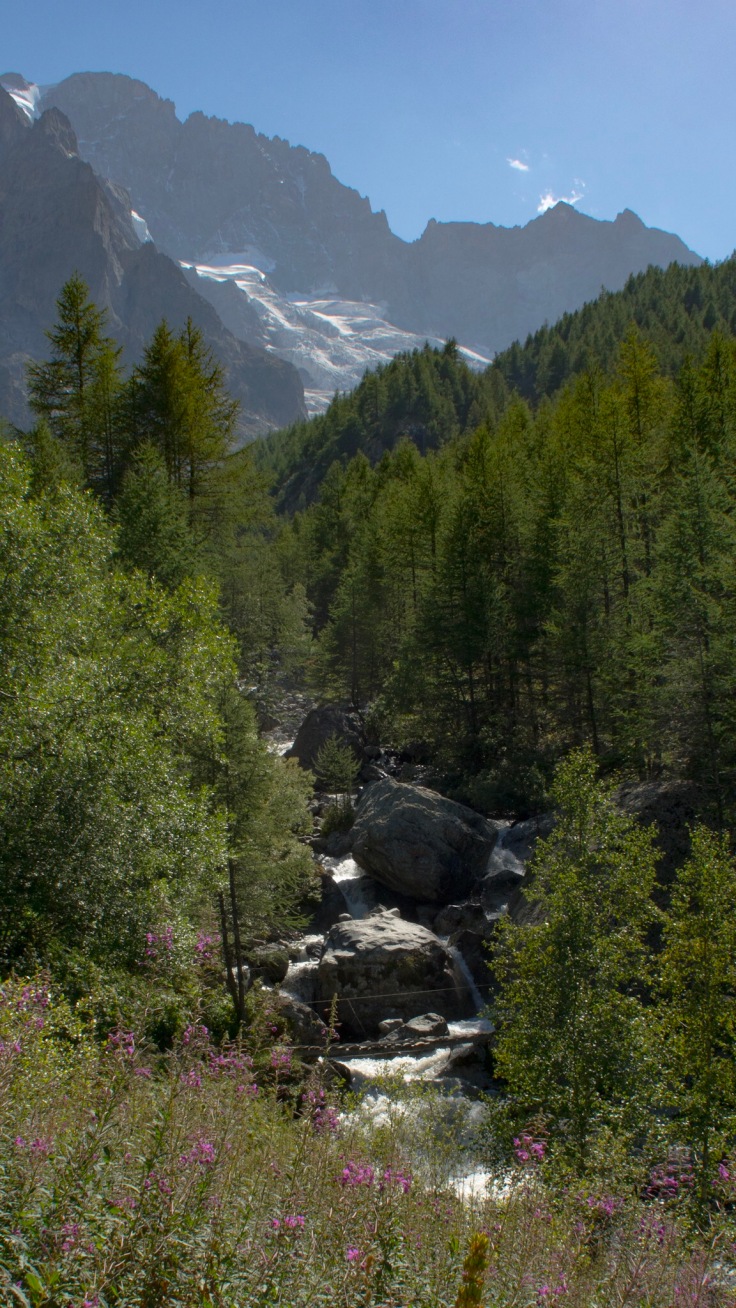 After this, it wasn’t too far back to La Grave and the campsite. The hike was about 16k, with over 1400m of ascent, which took us about 8 hours with stops for food, to admire the views and take photographs. What a great day! 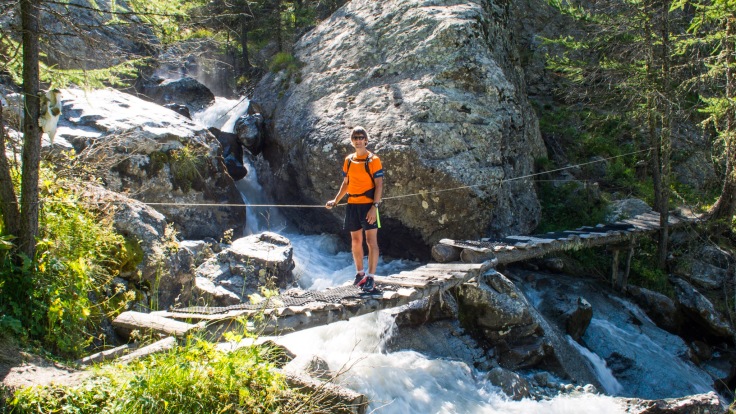 We think we’re going to move on from the Ecrins tomorrow. We’re hoping to do a 4-day trek in the Vanoise Alps if the weather allows. Watch this space!