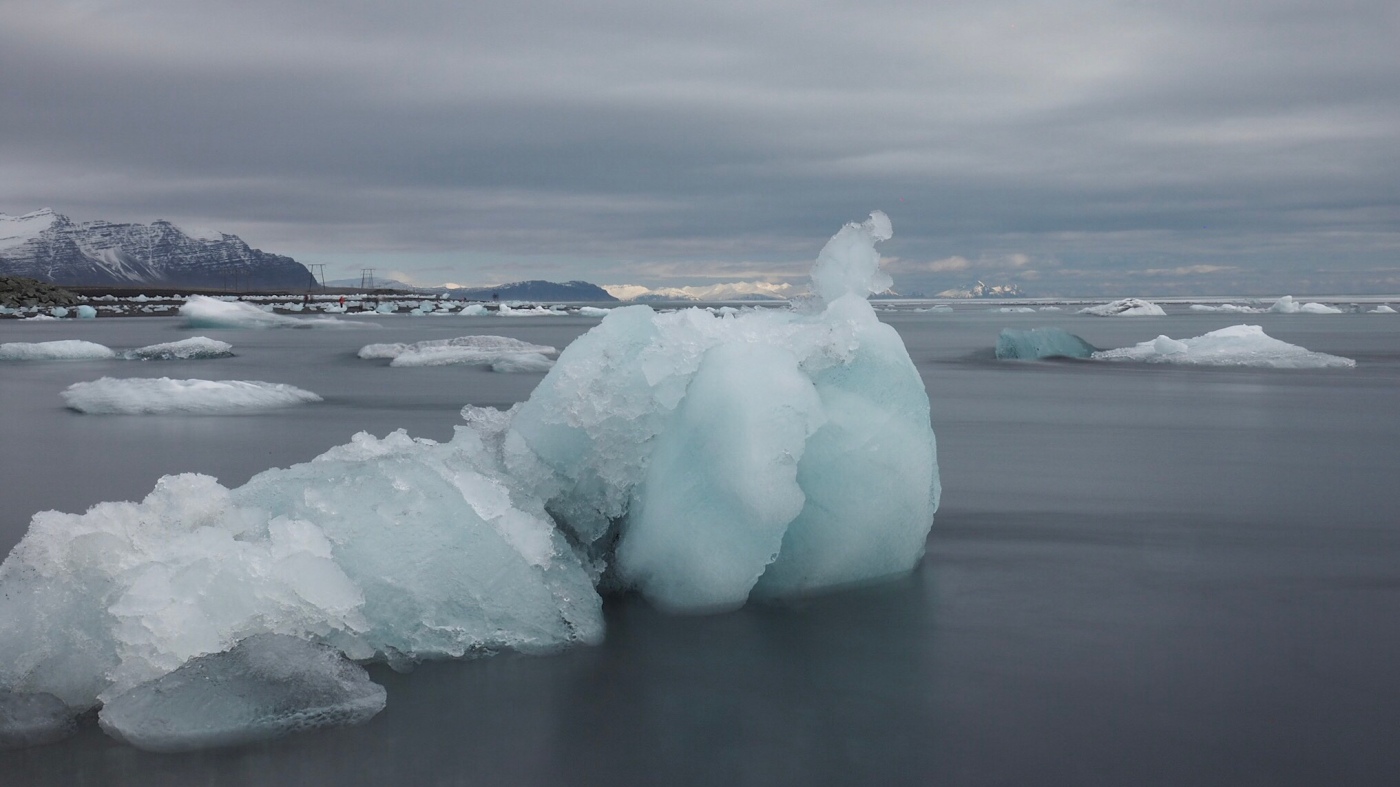 We’ve been to the most awesome place today, Jökulsárlón glacial lagoon. I didn’t know how beautiful icebergs were, or that they came in so many colours and textures. We took dozens of photographs… I could do my whole photography course on this one amazing place!

After finally having a good night’s sleep, I got up at 7 and went to make a cup of tea. When I opened the curtains, I was surprised to see it was snowing, with a thin layer starting to cover the grass. We decided to carry on with what we’d planned and threw our stuff in the boot and set off. When we got to the main road, it was snowing quite heavily and starting to stick on the road in places, so John put the car into 4 wheel drive. We had bit of a panic when the first petrol station we reached had run out of diesel. The villages are so few and far between, I had visions of us running out of fuel and being stranded in the snow! Ever the drama queen! Luckily there was another petrol station a bit further along our route and we finally arrived at our first stop, a smaller glacier lagoon than the day’s main attraction, Fjallsárlón. 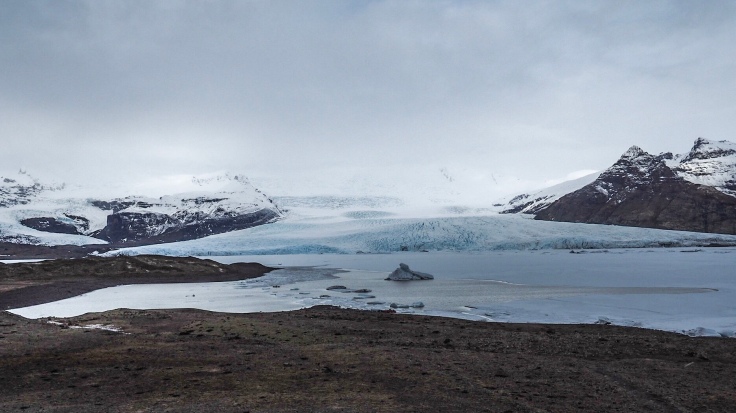 We’d been advised that this was a smaller, quieter version of Jökulsárlón. The view was lovely, over the lagoon towards the glaciers, which merge with the sky on this photo. However, I was disappointed because the lagoon was frozen and there were very few icebergs floating in it. I hoped Jökulsárlón was better. 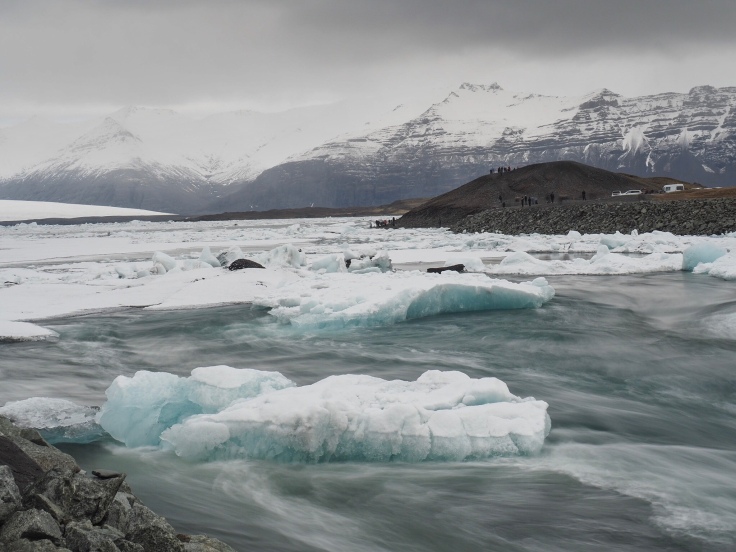 We were soon there and parked the car by the river between the glacial lagoon and the sea. The lagoon was frozen, but the river was running from it, and there were icebergs that had broken away from the glacier floating in it. Yay!

We walked along the river towards the beach as there seemed to be a lot of people there. It was amazing watching some icebergs flying along in the current, while others were stuck on rocks. I took some long exposure shots, pleased to be getting the sort of image I’d been hoping for. Some of the ice looked like jewels, clear, shining and stunning against the black rocks and sand. 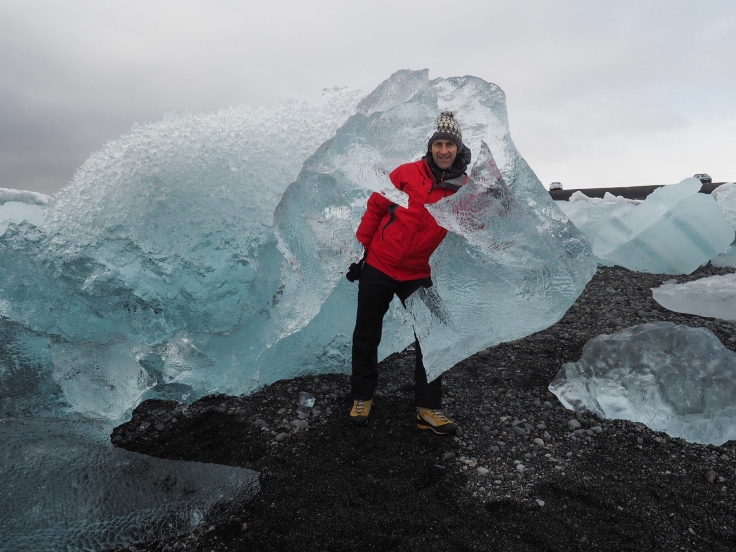 I noticed John had vanished so I went to catch him up. He was exploring the icebergs on the beach, and loving it, shouting me over so he could show me everything. The place definitely exceeded our expectations! 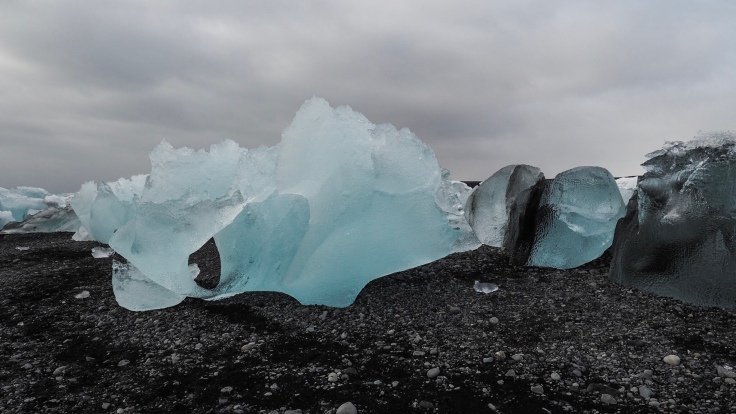 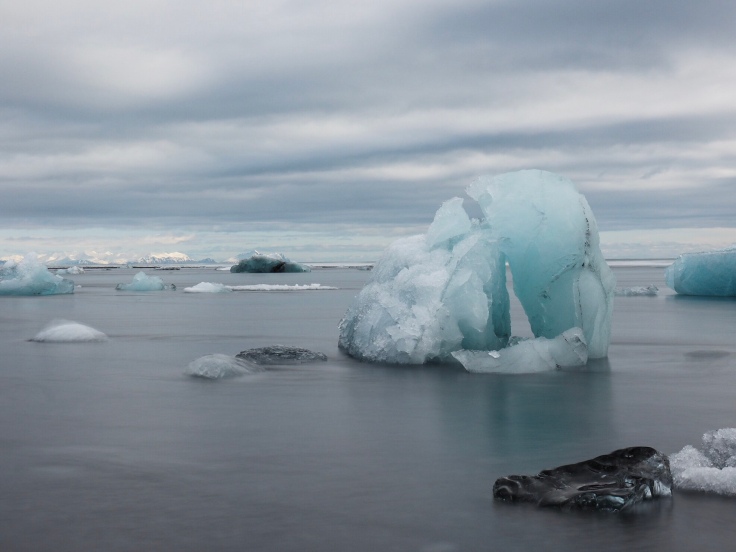 They looked great against the black sand of the beach, but I also loved the way single icebergs stood alone and proud in the water. I think my favourite type of iceberg were the ones like blue, shiny glass.

We finally reached the end of the icebergs stranded along the beach. The tide was coming in now and the waves were crashing further out to sea, tossing icebergs around with ease. It was awesome to watch, standing among ice debris on the shore. 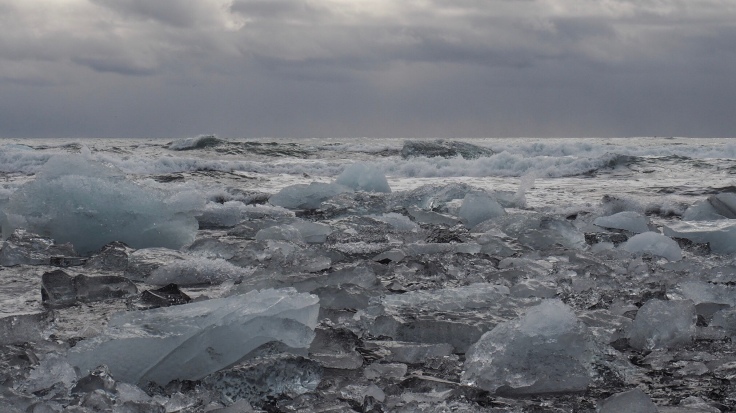 We wandered back to the car, taking yet more photos as we went, seeing the icebergs from another viewpoint. 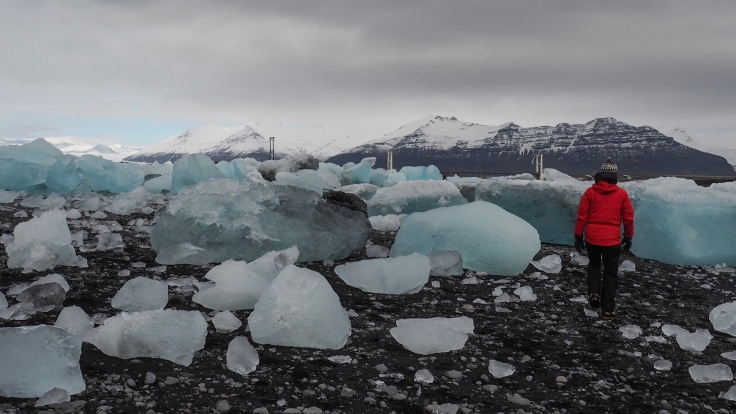 Once we were back on the embankment, I was amused to see so many people crawling around the icebergs like ants. It hadn’t felt so busy when we were among them! 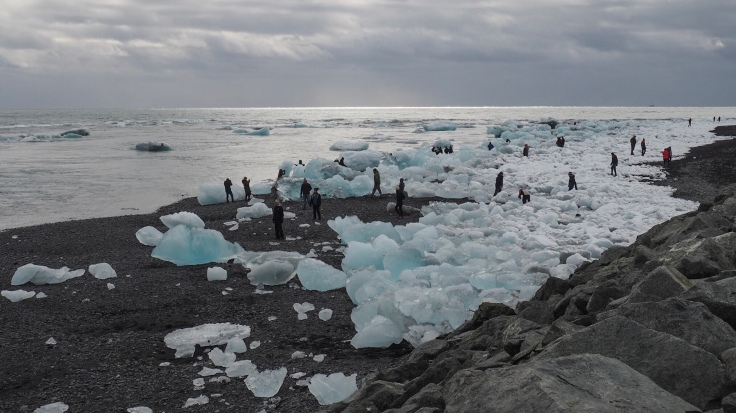 It had stopped snowing before we got to the glacier lagoons. However, as we drove back towards our Airbnb, it started again. It was quite thick in places, and we decided against visiting Svartifoss and Skaftafell because the roads were likely to be dodgy, even with 4 wheel drive. As we got back to our village, we stopped at the supermarket for milk, horrified to find it was closed. No tea or coffee! The opening hours of the shops are really strange. This supermarket was only open from 10 until 2 on a Saturday! The same was true of the liquor store but we have plenty of gin and wine. Thankfully, we found a petrol station selling some groceries, and we stocked up on milk and snacks.

We move on again tomorrow. We’re staying near Mývatn in the north of Iceland. After writing this blog, I’m going to have a shower and wash my hair, pack and then relax for the evening. We have an 8 hour drive tomorrow. I hope it doesn’t keep snowing or it’ll take even longer! I’m also looking forward to looking presentable, wearing jeans and a jumper instead of hiking gear, so I can do without bad weather!