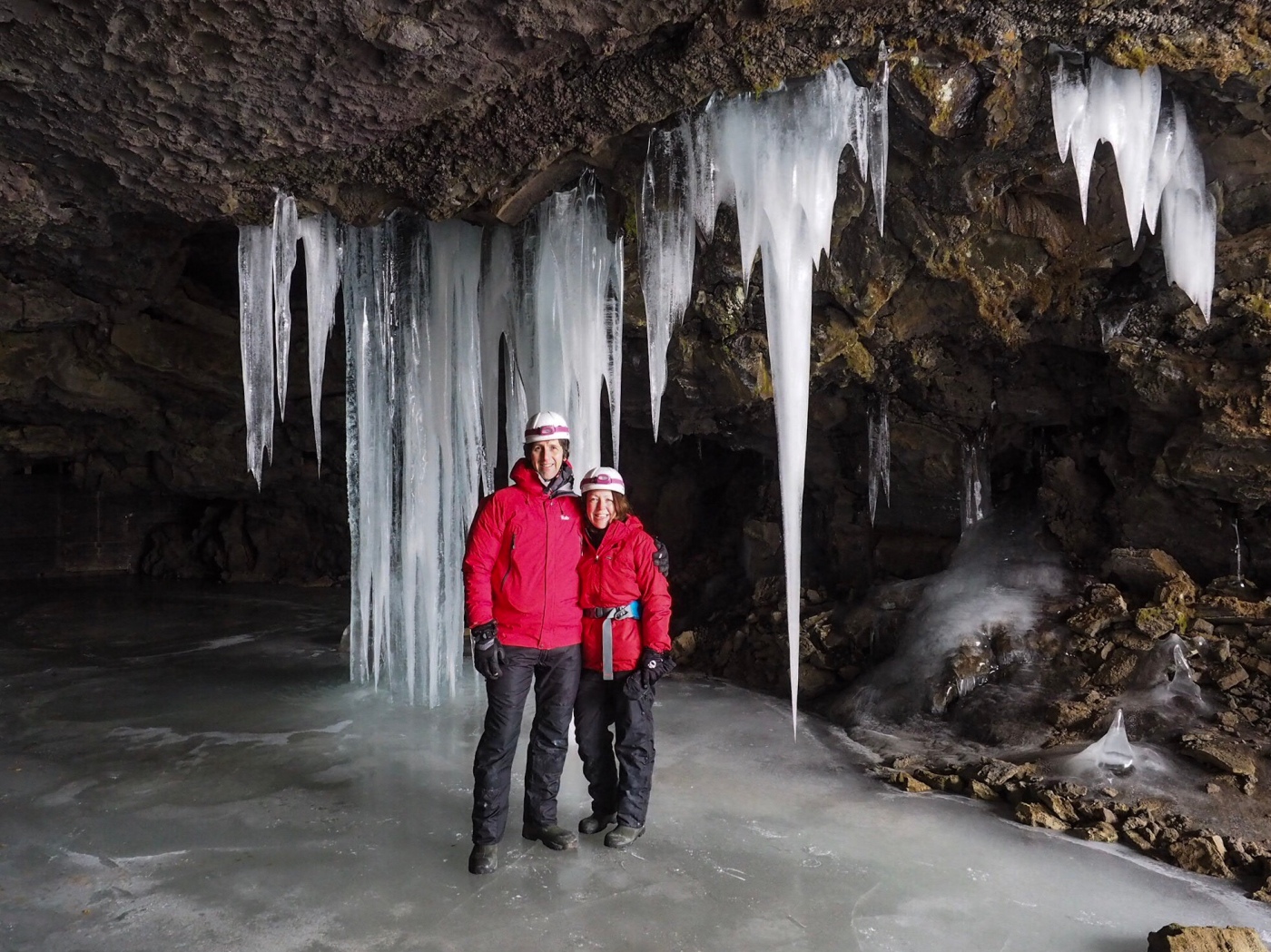 Today we had our biggest adventure of the trip so far… driving off road, hiking across a lava field in a blizzard and crawling through holes and sliding on ice in a lava cave with beautiful ice sculptures. Fab!

Our guide, Thor, picked us up from our Airbnb just after 10.00. He looked like a Viking and it turns out he was also a Wildling in season 3 of Game of Thrones. There were just 4 of us on the trip, which was great. Our fellow adventurers were Alan and Ethan from California, who were great company.

I chose to sit in the front seat of Thor’s car, a big 4×4 Nissan Pathfinder, thinking I’d be able to take photos from there. This may not have been my best idea. At the volcano, Hverfjall, which we climbed yesterday, we turned right instead of left. If I thought yesterday’s road was bad, today’s was definitely worse… 25 kilometres through rutted, icy and snowy lava fields, sometimes far from horizontal! At times the track wasn’t recognisable as any sort of road, and it was snowing quite heavily now. Thor was completely calm though… he obviously does this all the time… and I had complete confidence in his ability to get us to the cave safely. 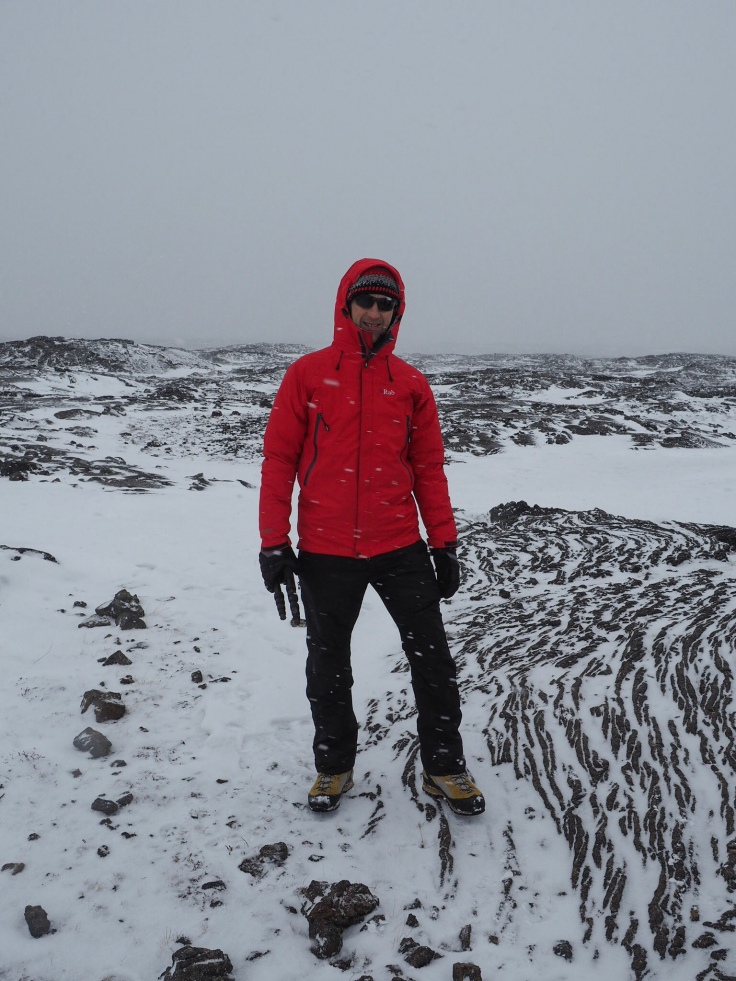 Finally the track ran out completely and Thor parked on some flat volcanic rocks. From there, we wrapped up warm in our coats, hats and gloves, leaving behind our rucksacks, which Thor advised might get in the way when we were squeezing through gaps in the cave.

To get to the cave, we walked for about 20 minutes. Although we’d booked the trip as a snowshoe trip, snowshoes were unnecessary. With the soft, fresh snow, and grippy rock, we were fine in our hiking boots. The rock was stripey and rope-like, which Thor explained to us was formed when fast moving lava solidified. Beautiful!

The landscape all looked the same… black lava rocks and rubble, punching through the soft, white snow. In the heavy snowfall, I wondered how Thor knew where we were going, although as we got nearer the cave, I noticed cairns dotted along our route. A trailer came into view, which seemed odd until Thor told us that it had been dragged there when the snow was particularly deep and solid, so they could keep kit in it. When we reached the trailer, we changed our hiking boots for wellies with a good grip, and our woolly hats for helmets with head torches. It seemed odd leaving the door of the trailer open when we went to the cave, even though we completely were in the middle of nowhere!

The cave entrance wasn’t immediately obvious until it was pointed out. We went down some steep metal steps, under icicles hanging from the rock to the cave below. Exciting!

Thor then explained what would happen next, and what we needed to be careful about. We would be walking on ice 30 metres deep so we needed to be careful and take small, precise steps so as not to slip. There were icicles hanging down from the roof that we should be careful not to knock off, and others growing up from the ground that we should be careful not to trip over. The aim was to leave the cave looking just as beautiful for those who visited after us, as well as not being injured!

After admiring the ice formations in the outer chambers of the cave, our first challenge was to pull ourselves on our tummy’s through a small hole in the rock, 1.5 metres long, using a rope. I’d read about this and was a bit worried about it, but there was no turning back now, The ground was covered in mats and plastic sheeting to make it easier. John took my camera bag and tripod, and before I knew it, I was through. That was ok!

This picture shows Ethan, who wasn’t worried at all, coming through the other side of the gap. 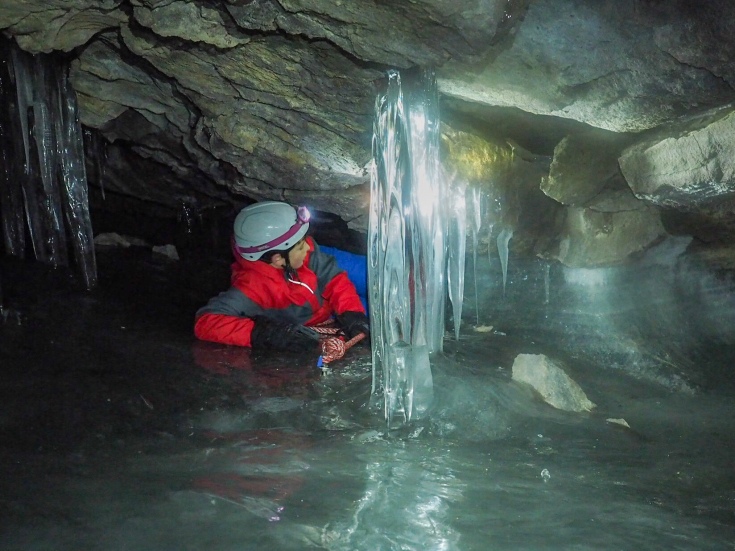 The series of chambers now became progressively larger. Although it was sometimes difficult to stand up. Thor was very tall so I knew I could stand up if he could! Our wellies had good grip, and there were lots of ropes to help us pull ourselves up through small gaps. Sometimes we had to slide down the ice on our bottoms or backs, using our feet to control our direction or stop ourselves, and always being careful to avoid damaging ice.

The ice formations were absolutely stunning. There were both smooth rounded stalagmites and pointy dagger-like stalactites or dripstones.

Others were glistening or aquamarine, and there was even a frozen waterfall. The colours of the rock were amazing from all the minerals.

I could have stayed there for hours taking photos! We all had our photos taken in the largest cave, with the largest ice sculptures. I wish someone had told me to straighten my helmet 🙂

Thor asked us to sit down on the sofas (rocks!) for a while. He told us to switch off our head torches for a couple of minutes. It was completely dark and silent. We couldn’t see our hands in front of our faces. So peaceful. And, although it was cool, it wasn’t as cold as it was outside the cave. 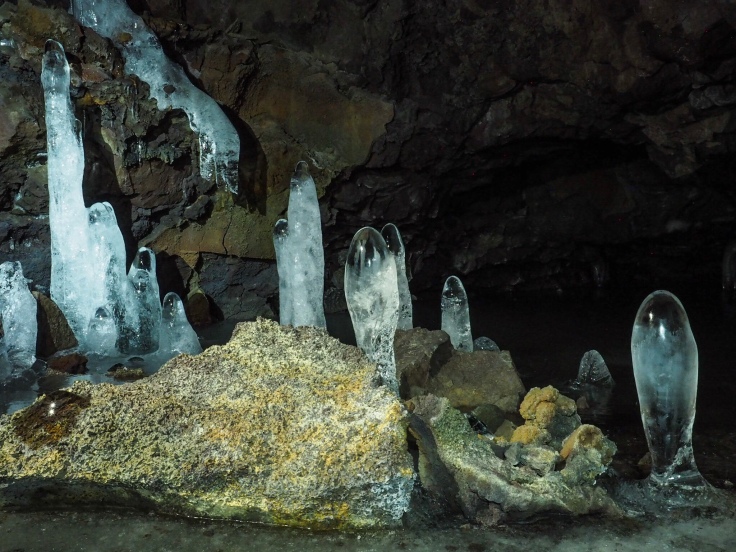 Thor was an excellent guide… giving us lots of information about the area, clearly explaining what we needed to know and answering our questions. He was also very patient, waiting for me as I set up my tripod and took photos in the cave, not rushing me or the others at all as we explored our surroundings.

Our time in the cave flew by and finally it was time to leave. We seemed to exit the cave much faster than we’d entered… maybe it was less challenging that way, or maybe we’d got used to pulling ourselves along the route and sliding on the ice. Some parts were lots of fun! I was filthy afterwards, Somehow, John managed to stay relatively clean! We knew when we were nearly out because we could feel the cold wind again. The snow was still falling outside. We spent some time taking pictures in the cave entrance.

Then we took the steps up out of the cave and returned to the trailer to change back into our woolly hats and hiking boots, putting our hoods up and our thick gloves on, ready for the blizzard and biting cold wind.

We walked quickly on the way back, without stopping to look at anything. It was so cold, we were pleased to see the car.

If I thought the road was dodgy on the way out, it was even worse on the way back. In fact, it was invisible in places! What a great adventure the whole day was! And well done to Thor for getting us back safely 🙂 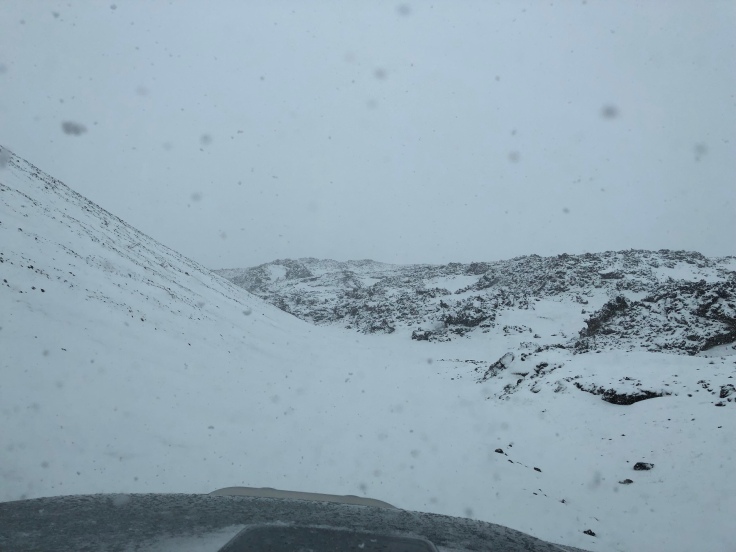 Back at our Airbnb we changed and showered. Then I did some research and found a restaurant where we enjoyed happy hour and dinner. By now the sun was shining again… and I thought the weather was changeable in the UK!

This evening we’ve done a load of washing while we sat in the hot tub and watched the sun go down. We still haven’t seen the Northern lights but I don’t even care any more. The rest of the adventures on the trip have more than made up for the lack of light show… and we still have a few more nights.