Today we travelled from Mývatn to Grundarfjörður, a small town situated on the Snæfellsnes peninsula in the west of Iceland. It’s been a really challenging drive for John on snowy roads in high winds, some of which were gravel not tarmac, even though they’re main roads. In the UK, people complain that roads haven’t been gritted after a little snow, but there’s none of that in Iceland. The cars have studded winter tyres and people are used to driving in it though.

We awoke to more snow than we’ve had before and, after a shower, coffee and packing the car, we set off. For the first few hours, we were travelling on the main ring road around Iceland but it was completely white and, although we’d set off with blue sky, at times, it clouded over completely and the snow came down heavily.

After about 45 mins we stopped to see Goðafoss waterfall, which luckily isn’t far from the main road. At 12 metres high and 30 metres wide, it’s not a huge waterfall by Icelandic standards, but it is beautiful. We took a few quick pictures, not wanting to hang around too long because the sat nav said our journey would take over 6 hours in normal road conditions.

After a while, we travelled through Iceland’s second largest town Akureyri without stopping to look around, and were soon out into the hills and mountains, completely white with thick snow. I’d hoped the road conditions would improve as we got further west, but they weren’t yet. John did really well considering he’s not used to driving in so much snow. Once again, there was very little traffic on the roads, which did at least make things a bit easier.

Finally, after a couple of hours, the sky became brighter again and it must have started to get warmer outside because the roads began to clear as we dropped down from the mountains. We hoped that was the end of the snow, but it wasn’t. The blizzards soon returned and the snow started to stick on the roads again! This alternating pattern continued, with strong winds thrown into the mix at times too, which I found quite scary.

About half way through the journey, we stopped at Blönduós for lunch. Using Tripadvisor, I chose a cafe that was almost right on our route. It turned out to be a great find. The special was lasagne in a big stainless steel serving dish, with salad and bread, and free refills. A big table of local workmen had all chosen it, and we did too. It was delicious so we had 2 portions, followed by cake and coffee, and it was the cheapest meal we’ve had. Perfect! A quick trip to the supermarket and petrol station, and we hit the road again.

The afternoon drive was a bit easier, although there was still snow across the road in places, particularly where it was being blown by the wind. We followed a snow plough for a while. It was great watching it lift the snow from the road and throw it high, and over onto the verge. Unfortunately, I didn’t get a photo! We mainly drove through rough grasslands, stretching as far as thy eye could see, covered in snow, sometimes with groups of horses grazing. 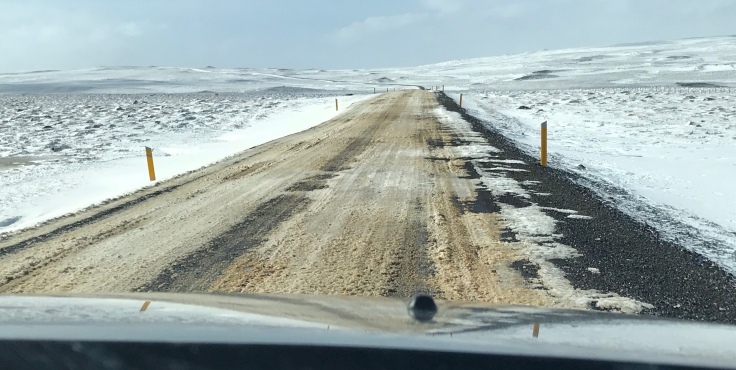 After rounding a long, deep blue fjord, we left the main road and took a rough gravel road across the base of the far north west peninsula to the north coast of the Snæfellsnes peninsula. It was covered in snow and I did wonder if we should have taken the longer route on the tarmac road. There was nothing around us for miles, apart from an occasional farm. John said he was happy with the rougher route though!

After this, the roads were usually clear of snow, if rather pot holed and bumpy. The sun was shining and the views were beautiful, with snow covered hills to the left and the turquoise sea to the right, covered in white capped waves due to the wind. As we turned onto yet another gravel road, marked on the map as a main road, John joked that it’d be a rally stage at home! The car is now absolutely filthy!

We were surprised to reach stunning white mountains again, just 15 mins before our Airbnb. We hadn’t realised the area would be so mountainous and pretty. Or that there would have been so much recent snow that it was piled up high beside the roads. Winter wonderland! 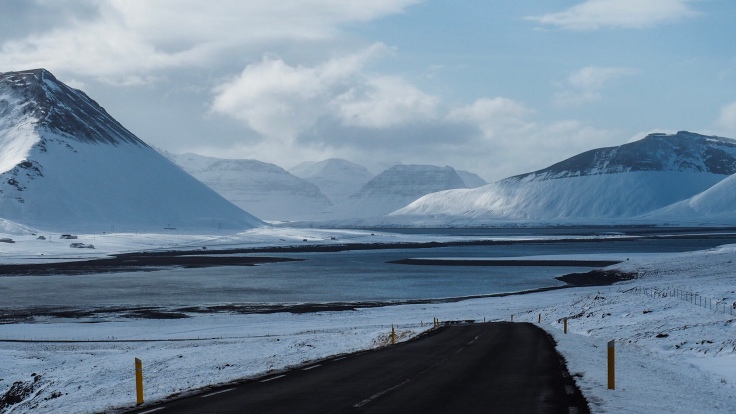 In Grundarfjörður as we approached the Airbnb, the snow was 8 inches deep on top of the cars. The mountain, Kirkjufell, looks fantastic in the sunshine, and I just love our little green box! I’m going to enjoy staying here 😊