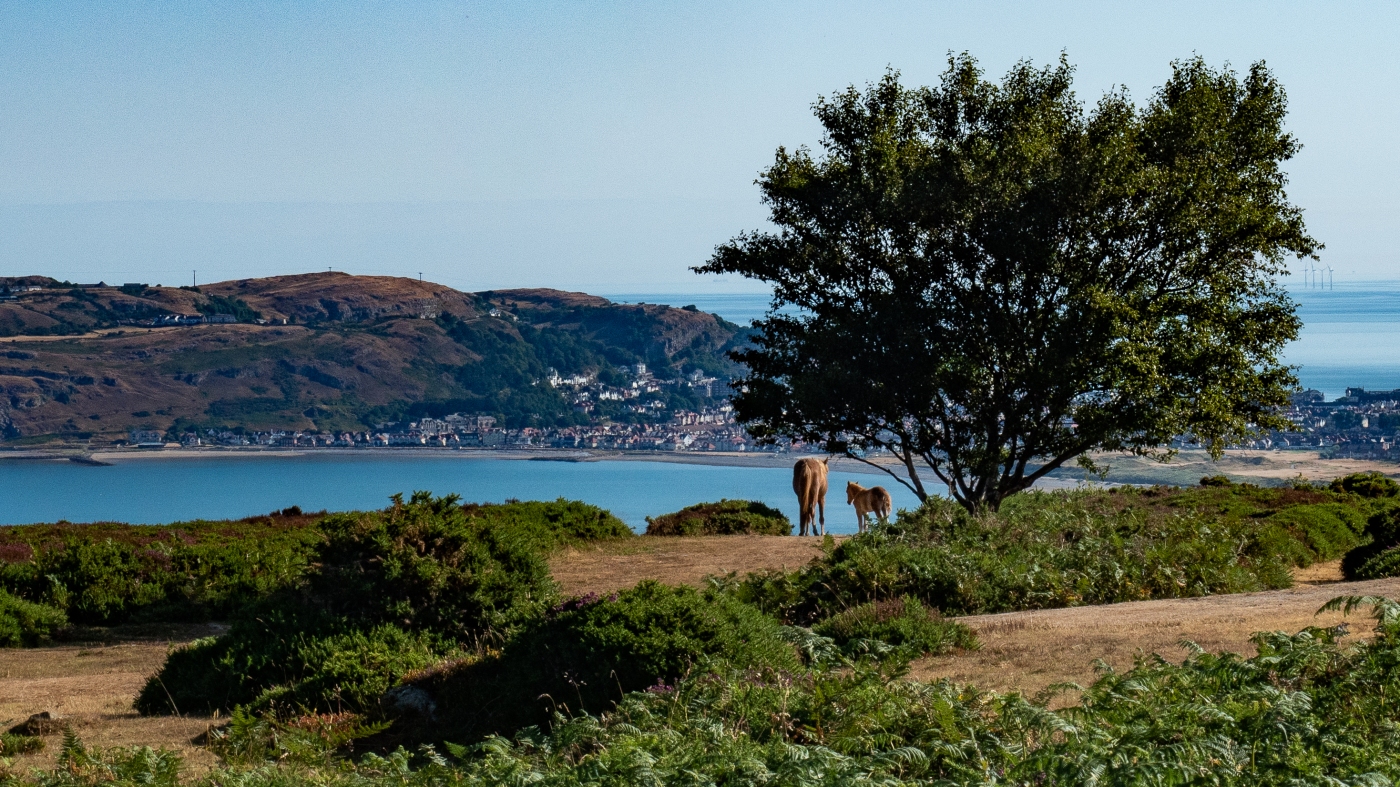 When I did Trail Marathon Wales on the hottest day of the year, last year, I said I’d never do a run in heat like that again. So how come I ended up attempting an ultra during a heatwave?! Yes… I must be mad. It was a day of ups and downs, and I did feel really poorly for a while, but in the end, I did well, I think. I had debated backing out the previous evening because of the heat, but decided that’s not me… I couldn’t. I had to try and, as always, I’m glad I did.

The North Wales Path is a 62 mile (100 km) linear trail which runs from Prestatyn to Bangor, practically past our front door. When we originally read about the challenge we thought this path went along the coast. However, we were muddling it up with the Wales Coast Path. The North Wales Path leaves the coast and passes inland to the hills above Llanddulas and the beautiful lower reaches of the Carneddau mountains above Conwy and Llanfairfechan. It has a total ascent of 2,350 metres (7,700 feet) and reaches a maximum height of 425 metres (1,396 feet). The views along the coast, to Anglesey, Liverpool and Snowdonia are fantastic, particularly in the sunny weather we’ve been having.

This event was another of Joe Cooper’s WalkRun Clwydian supported challenges. The North Wales Path supported challenge was a 2-day event, from Prestatyn to Llandudno on day 1 and from Llandudno to Bangor on day 2. The first day was generally flat but was the longer section at about 34 miles. Although we’d booked to do the whole event, we had to miss this day to collect our new camper van, which I’m sure will soon appear in another blog episode. I was glad we were missing day 1 rather than day 2 because it has long, flat sections of cycle path… the sort of terrain I find most difficult, particularly when I’m trying to keep up with a group. I prefer off road hilly trails… at least the uphills give me an excuse to walk and the paths are kinder to my knees and feet!

Day 2 was shorter at 28 miles, but with 400m of ascent. It started from Llandudno before heading uphill over Conwy Mountain and into the Carneddau. Joe had split the day into 4 legs with 3 checkpoints where we could top up our water and snacks, and get something more substantial to eat and change our sweaty socks and T shirts.  Because I was worried about the heat, I decided to just do the middle 2 legs, which would be scenic, hilly and on trails rather than tarmac paths.

We met the group at West Shore, Llandudno at 7.45. There were 5 ladies who had done the previous day, together with Joe and Dan, who was driving the van with our kit between the checkpoints and supporting us, as well leading us on leg 3. The other ladies looked tired after a long hot day 1, but also very strong and determined to get through day 2.

As Joe led the runners off on the path along the estuary to Conwy, I jumped in the van with Dan. The first checkpoint was at the Sychnant pass, the other side of Conwy mountain, and I decided that I’d walk up the path from there to take some photos on top of the mountain and meet the others coming the other way.

I took my time going up taking in the beautiful views over Conwy castle, Llandudno and the Great Orme, and watching the ponies grazing on the slopes. The purple heather and bright green bracken was a welcome contrast to the yellow grass everywhere else. Although I’m enjoying the sunshine, we desperately need some rain. It was still early but I was very red and sweaty even after my short exertion up the hill. I really struggle when it’s hot and I hoped I’d be ok as the sun got higher.

After a while, I started to worry that I’d missed the group coming up the mountain. I was on the top but the North Wales path skirts around the hillside and I couldn’t see it below me. I decided I’d better get back down to the van in case they were waiting for me, or wondering if I was lost! I jogged back down to where Dan was waiting, sitting in the shade of the van, with everyone’s bags and boxes ready, and flat coke, water and energy snacks.

I hadn’t missed the others and it wasn’t long until John came jogging down the path with the others not far behind him.

After everyone had had something to eat, topped up their hydration packs, and changed their clothes we were off again. It was lovely to be joining in now and to have fresh legs. For once, I was at the front with Joe and John, rather than being at the back of a group. I reassured the ladies that we didn’t mind them taking their time and plodding. I know exactly what it’s like to feel as though you’re holding others up, and I didn’t mind how long it took us to complete the day. In fact, going slowly would help me in the sunshine.

The grassy path wound its way up, down and around the hills, regularly surprising us with glimpses of views of the coast, towards Anglesey and Puffin Island. At one point we could see all the way back to where the ladies had started in Prestatyn yesterday morning!

One lady, Tracy, was struggling with a bad knee and, unfortunately, had to leave us when we dropped down to Llanfairfechan, where Dan collected her. After this we had quite a steep climb back up into the hills. By now the sun was blazing and, when combined with the effort needed for the climb, I was struggling. In spite of drinking my electrolyte solution regularly to try and stay hydrated, my head was banging.

We finally reached the Roman road at the top and Joe told us all to follow the rocky track down to the van at our own pace. John and the fittest of the ladies, Chris, ran ahead and I started jogging. Joe and the other 3 ladies were behind me. I felt awful and, even though we were now winding steadily downhill and the running was quite easy, the last couple of kilometres took forever!

Finally, the van came into view in the top car park for Aber falls. There was very little shade but someone told me to get inside the passenger side of the van to get out of the sun and try and cool down. I was feeling quite sick by now but I forced a sandwich down and kept sipping my drink. I’d decided I wasn’t going to attempt leg 3, and was in awe of how well the ladies were coping in the heat when their bodies were already tired, aching and sunburnt from the previous day.

Another lady (called Tracy like the lady with the bad knee) decided to retire at this point, very happy with all she’d achieved by completing a day and a half. Fantastic! The 3 remaining ladies (Chris, Bev and Sue from Deestriders running club) and John set off with Dan leading now, while Joe packed the van. I changed my clothes and took 2 paracetamol now I’d stopped feeling sick and felt I could keep them down.

We drove down the hill towards Aber and found one of the ladies sitting in the road with the others standing around her. We stoped to check she was ok and she was fine… just patching up more blisters. I’m lucky that I’ve never had major problems with my feet when doing these ultras… I don’t know how people overcome blisters… I’m sure I’d wimp out! She was very determined though and soon ready to go again. We waved them off on the path to Aber falls, before stopping at the cafe in the village. There we had the best tasting ice cream ever, standing in the shade. Now I was cooling down, I was starting to feel human again. When I’ve had headaches from the sun before, they’ve sometimes taken 24 hours to go, with me spending that time curled up in bed, so I was very glad I seemed to have caught this one in time.

Joe had time to kill before we needed to be at the next checkpoint so he drove us to a nature reserve at the beach. We sat for a while looking over the Menai Straits to Beaumaris where my parents live on Anglesey. There was a breeze here and I was definitely feeling better. I was even thinking I’d be able to run the last leg of the challenge now, which was pleasing. Unfortunately, we couldn’t have a paddle because the tide was so far out!

We then parked in a shady lane and waited for the group to come down from the hills. John had posted on Facebook that they’d done 35k so we knew they weren’t too far away although, at one point, I did wonder if they’d got lost because they seemed to be taken a long time. It turned out that, unsurprisingly, a couple of the ladies were really starting to struggle. However, they were all as determined as ever and nothing was going to stop them doing the last 8k leg and finishing the challenge!

I was happy to be joining them again and hoping I could help motivate them to the finish and distract them from how exhausted they were feeling. This final leg was mainly flat on roads and tracks, more or less following the River Ogwen to Bangor. Much of it was through pleasant woodland on what must have been the line for an old slate railway.

To me the kilometres seemed to pass quickly as I counted them down for the ladies… just a park run 5k to go! I’m sure each kilometre seemed much longer to them but finally we only had one to go as we reached the coast. We now just had to run past the marina to Bangor Pier, the end of the challenge, where one of the ladies’ husbands was waiting with a lovely glass of fizz for each of us to celebrate with. They did it! 62 miles over 2 days! John did the full 28 miles of day 2, and I managed about 17. I’m happy with that, and proud of John and the others. All in all, an excellent day! Thanks to Joe, Dan and the husbands/partners for their support. I wonder what we’ll do next? 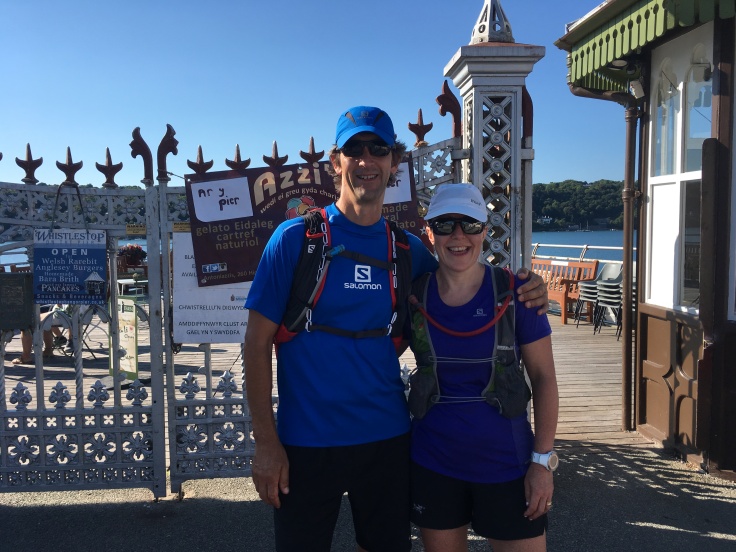 2 thoughts on “The North Wales Path: our final challenge… for now…”