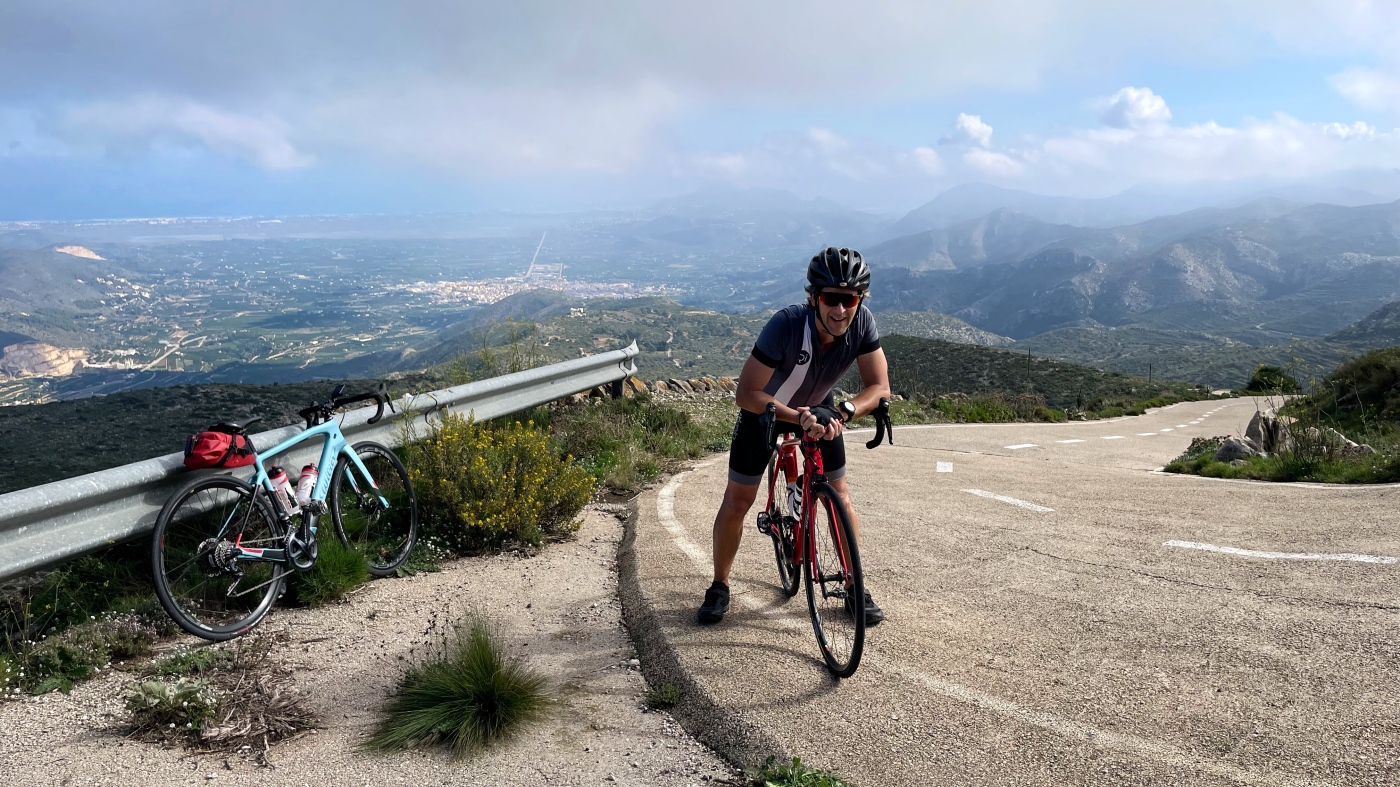 The weather was glorious again but the trip to the seaside for a paddle and an ice cream wasn’t to be. We decided to postpone it until tomorrow because the weather was perfect for a ride to the mountains, which are more weather dependent than the coast. Also, Marvin and his friend Tonio were going to climb El Miserat, so we decided to join them. This mountain is 756 metres high and, because there are antennas and forest fire lookout station on the top, a steep and winding road goes all the way to the summit. It would be a test of my legs and ebike motor, and an even bigger test of John‘s legs and lungs!

After a good breakfast, we got our cycling kit on and set off. At the start, Tiffany and Shelley were cycling with us but, after a while, they turned off for a more leisurely day, while John, Dave, Marvin, Tonio and I headed for the hills.

We left the main road and followed a valley, which got narrower and more remote as we gradually climbed uphill. We hardly saw anybody until a large group of ebikers came flying past. Their big, heavy and chunky ebikes weren’t as pretty as my svelte model!

We could see the mountain with the antennas way off in the distance, but were gradually reeling it in. I was rather pleased with myself at first because I didn’t need to use my motor but, as the climbs became steeper, I switched my button to green and, on one particularly tough climb, to orange. The others meanwhile were slogging their way up the road under their own power, sweating profusely in the sunshine.

‘Don’t push too hard now!’ Dave said. ‘There’s a steeper climb coming soon, so you need to save some energy.’ We rounded a bend and there it was, the start of the final very steep climb to El Miserat. John stopped to get his breath back and we both had a drink before tackling the final ascent. I put my motor onto red, the highest level of assistance and we set off again.

My legs were burning but the motor meant that my heart rate and breathing were well under control. John, however, was finding the climb really tough on his standard road bike. We stopped for a break on a flattish corner and took some photographs, then it was time for the final slog. He dug deep and, before too long we were at the summit with the others. Phew!

The views were awesome in every direction, up a valley inland on one side, and to the coast on the other. When we had all recovered and taken lots of photos, it was time to turn back downhill. Dave warned us to be careful because the road was so steep and, in places, covered in gravel. This can be like ball bearings if you hit it too fast!

We all reached the bottom of the road up El Miserat safely, rejoining the main road. I was last as usual because I’m so cautious, but John was also slower than usual because his hired bike has calliper brakes, which are less effective than the hydraulic brakes that my hired bike and our bikes at home have.

There was a lot of downhill from this point, which in some ways was lovely because its easier on your legs, heart and lungs. However, after a while, my forearms and shoulders were on fire from holding my brakes on all the time. I kept having to stop to shake my arms out. I was probably also a bit tired and hangry because we’d cycled over 50 kilometres by now without any food.

Thankfully, before I got too fed up, the road flattened out and we were soon back in civilisation and found a cafe to have some lunch. Meatballs and patatas bravas have never tasted so good! We chatted about my sore arms and Dave said he’ll see if he can move my bike seat forward and adjust my brake levers so I’m not having to stretch and put so much pressure on my hands and arms. This is something we had to do on my bike at home.

After lunch, the ride back was straightforward, with some lovely gentle downhills and a couple of steady uphills. We arrived back at the villa about 6 hours after leaving. This was probably our toughest ride to date… 83 kilometres with 1300 metres of ascent… and I think it’s fair to say we were shattered. In fact, I think John’s word was broken!

Tiffany had made a delicious cardamon cake, which we washed down with beer before showering. Then it was time for dinner… another delicious meal. Despite the cycling, I’m sure I’ll be returning home much heavier!

One thought on “An ascent of El Miserat”