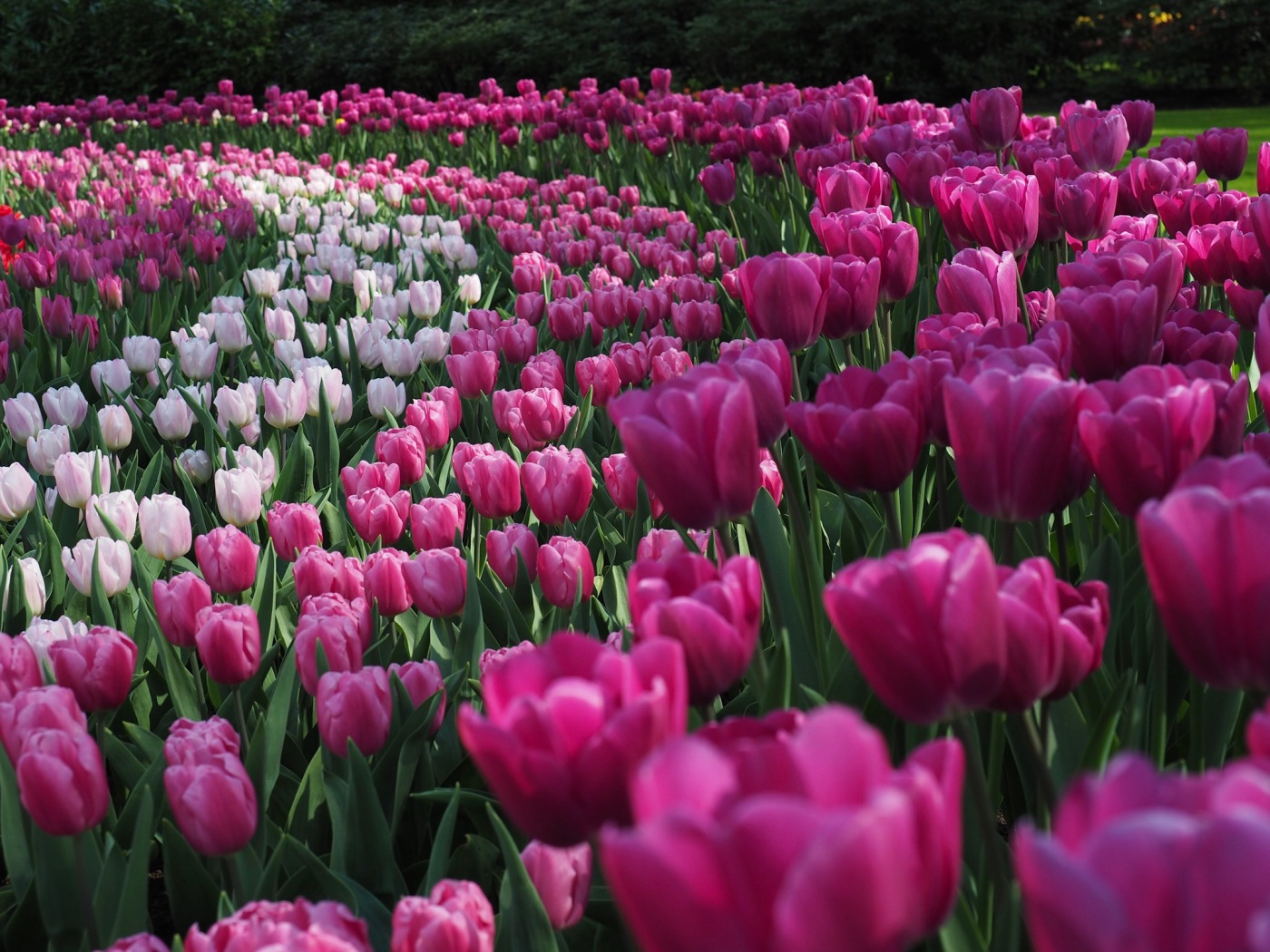 Today didn’t quite go as expected! We woke early and instead of heading to Keukenhof Gardens first thing, we went to the nearest Knaus motorhome and caravan dealers about 20 minutes away. We were forced into this change of plan because the carbon monoxide alarm suddenly sounded whilst we were watching a film before bed. We had no idea what had caused it and the alarm seemed ok. Therefore, we turned off all the gas and slept with the roof vents open. It’s a good job that it’s been warm!

After spending a few hours At DeKlerk Campers we were advised that the gas system was safe and that it was either a false reading on the detector or something wrong with the heater/water heater, which couldn’t be checked without a lot of work. So we left reassured with a detector and a new camping table. We’ll just have to be cautious for now when using the heating or water heater.

As we had now missed the opportunity to get into the gardens early, we decided to go later on, hoping to miss the crowds that way. We looked in the guidebook and found a cool pump house nearby and a lighthouse on the coast near a bulb field route, which would hopefully be worth a visit. The Cruquius steam pumping station was one of three steam powered pumps that were used to drain a huge lake. It would formerly have needed 160 windmills to do the same work! The Cruqhuis pump was designed and built in England in the mid nineteenth century. We were given a demonstration of the pump working, although it now works hydraulically and doesn’t serve any practical function. Nevertheless, it was very interesting.

We then had a lovely lunch and a beer in the sunshine at the brasserie next door while planning our next visit. We also decided to call the camperplaats we’d been staying at to book tonight, not wanting to drive north after the gardens. After this, we drove to Katwijk but could only view the bulb fields from a distance as the sat nav had taken us by main road. 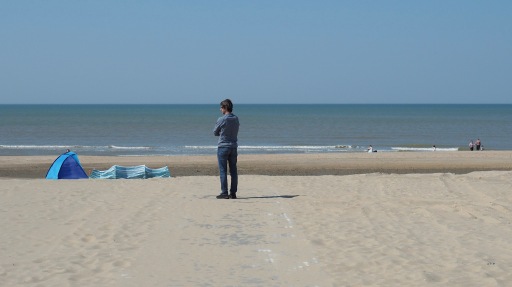 We were surprised by the size of Katwijk. It is a seaside holiday town with a promenade separated from the beach by sand dunes. We managed to park by the rather uninteresting lighthouse and then had a wander down to the beach. This had a string of cafes and restaurants along it and there were a surprising number of people enjoying the sunshine, but we didn’t spot anyone actually in the sea! 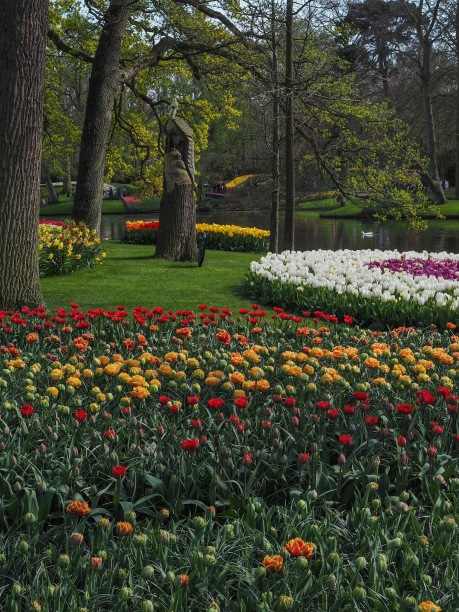 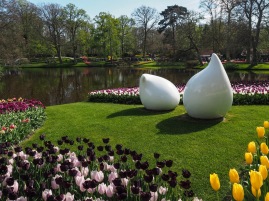 The roads were getting busy by now and as we neared Keukenhof there were queues of cars, lines of cyclists and groups of people on foot. We drove around to the main vehicle entrance not wanting to use the now very busy overflow car park. It was a pleasant surprise to get in easily and park very close to the entrance building. A lot of the traffic congestion outside was from vehicles, which had arrived early, now leaving. 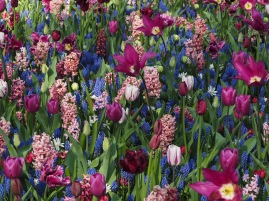 We were soon in thanks to e-tickets on our phones and were greeted by a seething mass of people. Our idea of hell! It wasn’t so bad once we were away from the entrance though. We both just wandered, looking at and smelling the thousands of flowers, taking photos and people watching. It was amusing watching the Asian women posing for photos amongst the flower beds. We preferred the more natural plantings, the trees and sculptures. The whole scale, vibrancy and colour of the gardens was truly amazing. 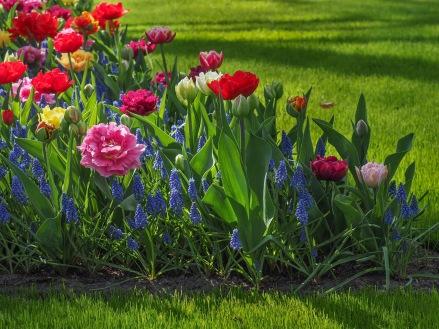 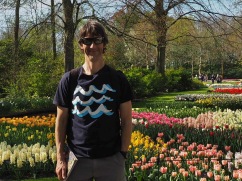 It got quieter throughout our visit, which was a bonus and made the photography easier. I was glad of this because I’m trying to get some photos to use in a book for my photography coursework. Also, I wasn’t feeling very well, with a pounding headache and I was happy to leave when John said he’d had enough. After a round about, very busy journey we made it back to the camperplaats and were pleased to see the same pitch we had previously used had been saved for us. 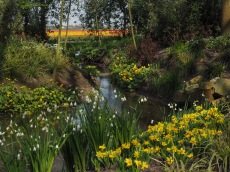 I rehydrated, took some paracetamol and got into bed for a sleep while John read and cooked his tea; something we couldn’t have done in the old van. The plan for tomorrow, all being well, is to try to get to Alkmaar for the famous cheese market and then head north to Den Helder where we should have been tonight. Fingers crossed!

Although the photos are mine, credit for the writing of this blog goes to John. It’s taken from his Polarsteps blog, which he’s been doing each day, and making an excellent job of! Having been poorly yesterday, I’m really glad of it because it means I haven’t got behind writing mine 🙂 I had planned to do Polarsteps too but haven’t had the time. If you’re interested, please follow John. The app maps our travels as well as including John’s photos and write up.