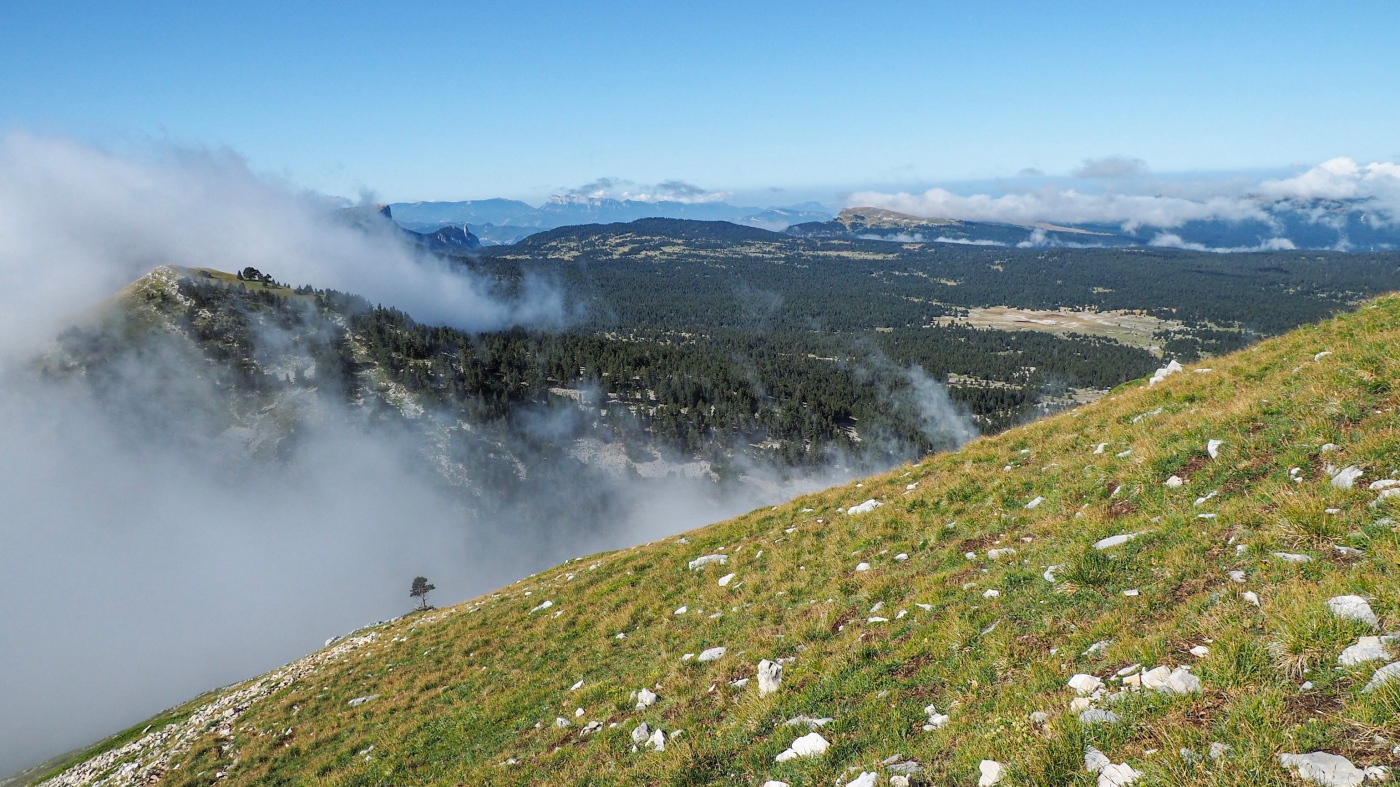 What a day… long and tiring but fab! I knew it was going to be difficult when we chose the most difficult walk in the Vercors for our first hike of the holiday and I was right, but it was worth it! Some highs and lows… being scared by the shepherd dogs, my first poo in the woods (too much information, I know!), marmots, ibex, cloud inversions, sunshine, a half marathon hike, and a climb as high as Snowdon.

After watching a beautiful sunset, we had set the alarm for 6.30 so we could start hiking early, and, hopefully be at the top of the mountain before it got too hot. It was very misty when we set off, which was very pretty, especially when the sun broke through. 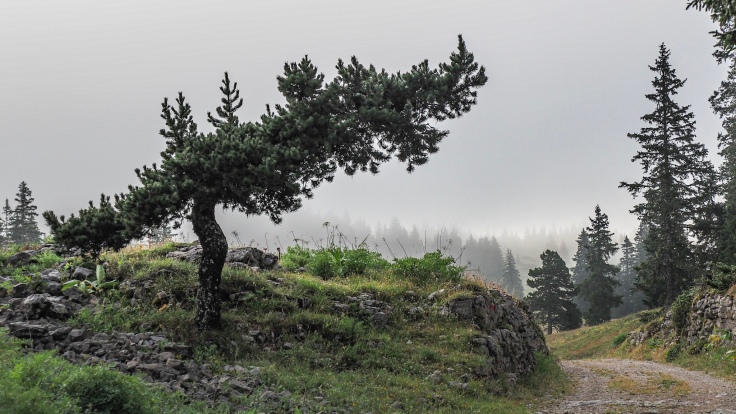 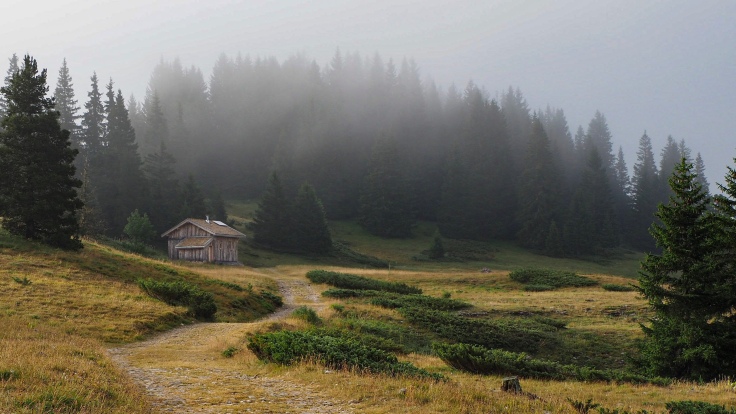 All was going well until we had to pass a shepherd with some huge dogs. One of them barked at me, which brought another two running. I grabbed John’s hand and nearly burst into tears! All was well… they are there to protect the sheep and scare animals (and people!) away. We just kept walking! The photo is out of focus because I wasn’t going to hang around composing a photo of that big, scary beast!

Shortly after this, we came to a cabin and John realised we’d gone the wrong way… we were doing the walk backwards! Then I decided I needed a poo… perfect… not! Luckily John had brought loo roll and he then dug me a little hole. After I’d done what I needed to do, he brought some rocks to hide everything… if that isn’t love, I don’t know what is! No pictures, sorry 😜 We then debated which way to go, both agreeing it should be the left fork.

We knew we were on the right track when we came to another cabin, and our footpath crossed the long distance GR91. The path gradually got steeper and I was a bit worried whether I’d manage such along walk as I felt quite breathless. The first few days in the Alps always affect me like this as, coming from sea level, we’re not used to altitude. This mountain was twice as high as Snowdon or Ben Nevis. I was distracted by some marmots that, surprisingly, didn’t run off and hide in their burrow, but posed for a photo. It’s not great because the mist was so low making the image rather flat and hazy. 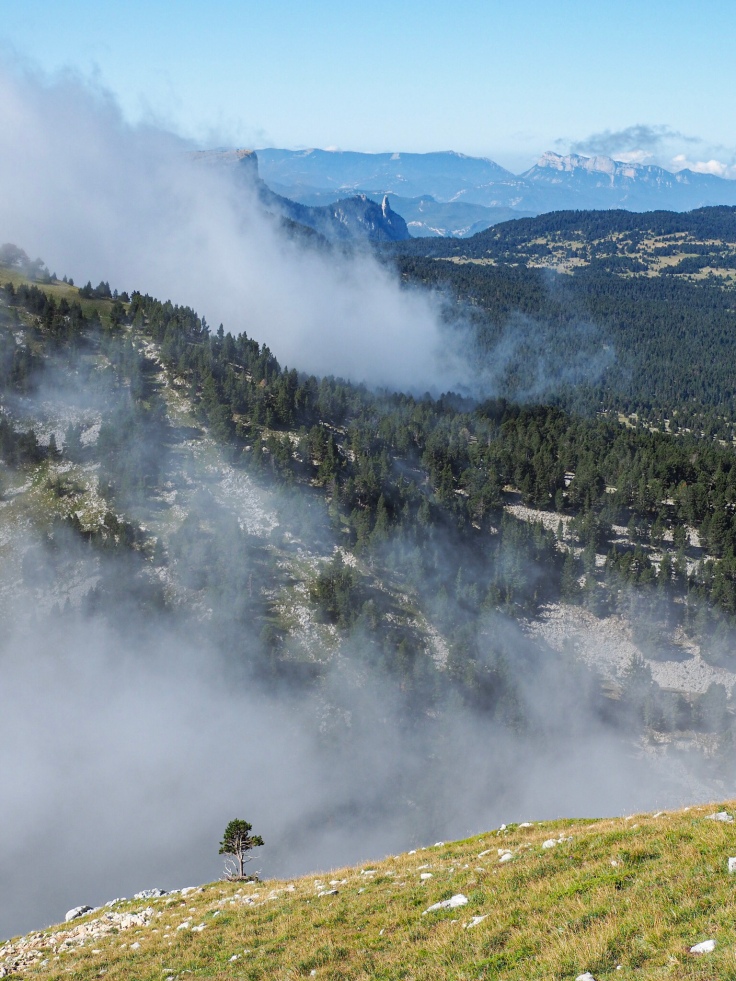 As we approached the pass at the bottom of the steep climb up the mountain it got colder and mistier as the cloud tumbled over from the valley on the other side. However, as we plodded up the zig-zag path we gradually emerged from the cloud and could see fantastic views back over the valley that we’d walked through. Amazing!

John then spotted an ibex on the horizon, several zig-zags above us. Unfortunately, I was too slow getting the camera out and missed it. However, we kept climbing slowly, hoping to see another and, what we think was the same male, appeared in front of us again. I managed to get some good shots, then it turned and started walking up the path towards us. We couldn’t believe it!

It turned out he wanted to get back to his family group, complete with babies, a little higher up the mountain. After that we saw dozens more, sleeping and eating on the slopes. It was amazing. We’ve never been so close to so many! Although they were wary, they didn’t run away. We walked though slowly, taking photos now and again. I think we were lucky to be doing the route in reverse and to be the first people to pass them that morning. 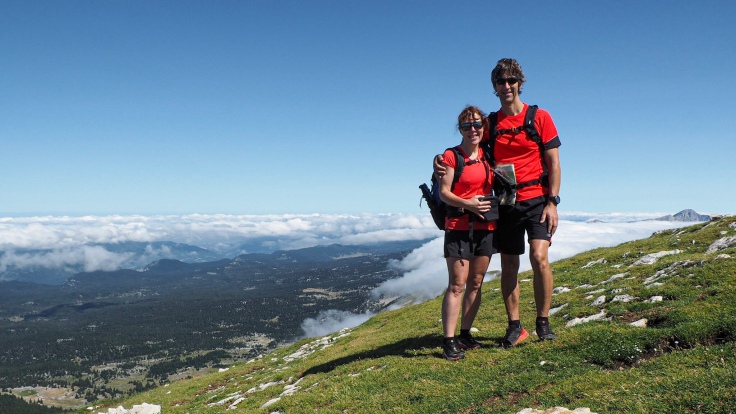 After steadily climbing for some time… lungs heaving because of the altitude and calves hurting because they’re not used to climbing mountains yet, we finally got to the summit at 2341m high. The cloud inversion in the valley below was stunning. I love it when we climb above the cloud, even though it means the bottom of the valley is hidden. We were lucky to be able to see the valley floor on one side, and the cloud on the other, rolling over the ridge in between. The weather was perfect too! 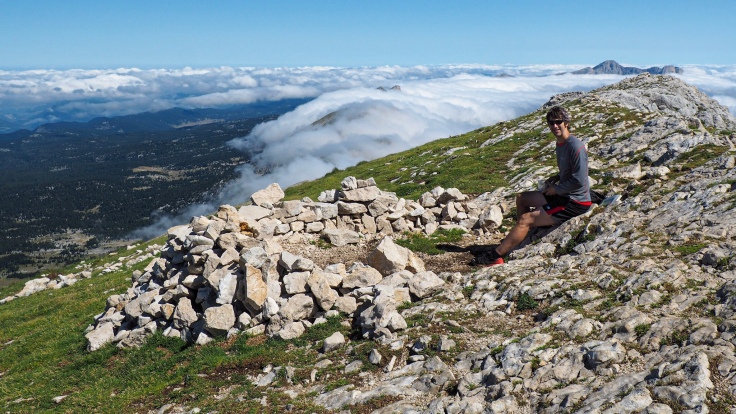 We pulled long sleeved tops on to keep us warm in the breeze and sat down to have our lunch. Then we set off downhill, the way everyone else seemed to have come up the mountain. The rock underfoot was quite loose and we were glad of our poles to help us balance. It was hard work and we made slower progress than I’d expected. 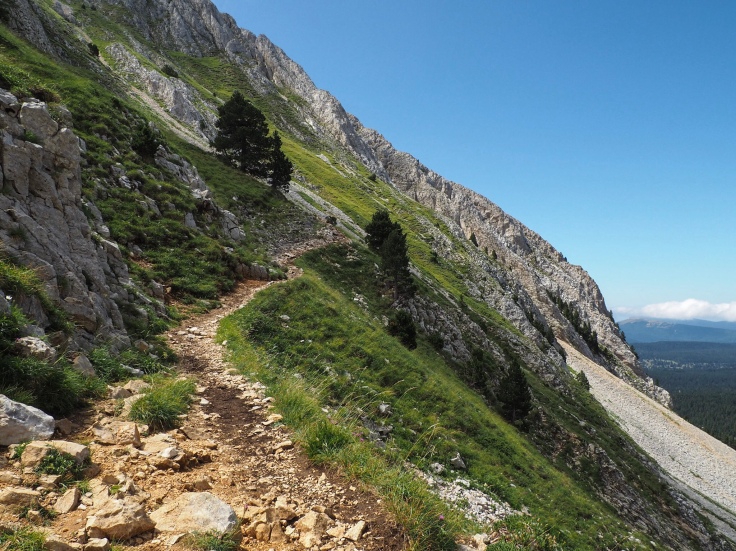 Finally we arrived back down on the plateau. It was quite hot by now and I was glad to have patches of shade in the forest. The last few kilometres seemed to take forever and I was quite worried whether we were on the right track… the signposting was pretty poor and our map wasn’t as good as the OS maps we’re used to in the UK. Thankfully, all was well and we eventually reached a path we recognised starting out on. Almost 7 hours and 21 kilometres later we were back at the campervan. Yay! 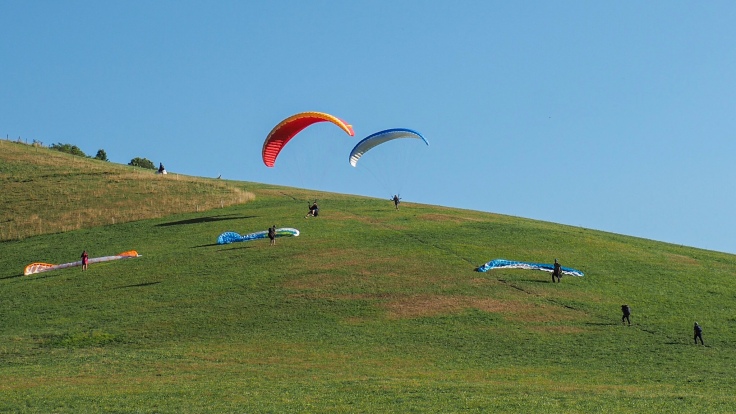 We then drove to Lans en Vercor where we plan to walk tomorrow. We’re staying in a campervan aire next to a paragliding school and it’s been entertaining watching them practise. We’ve had a shower in the van, and some excellent food and wine in a local cafe. Now it’s time for bed. I wonder what adventures tomorrow will bring!

4 thoughts on “A 7-hour adventure up the Grand Veymont”