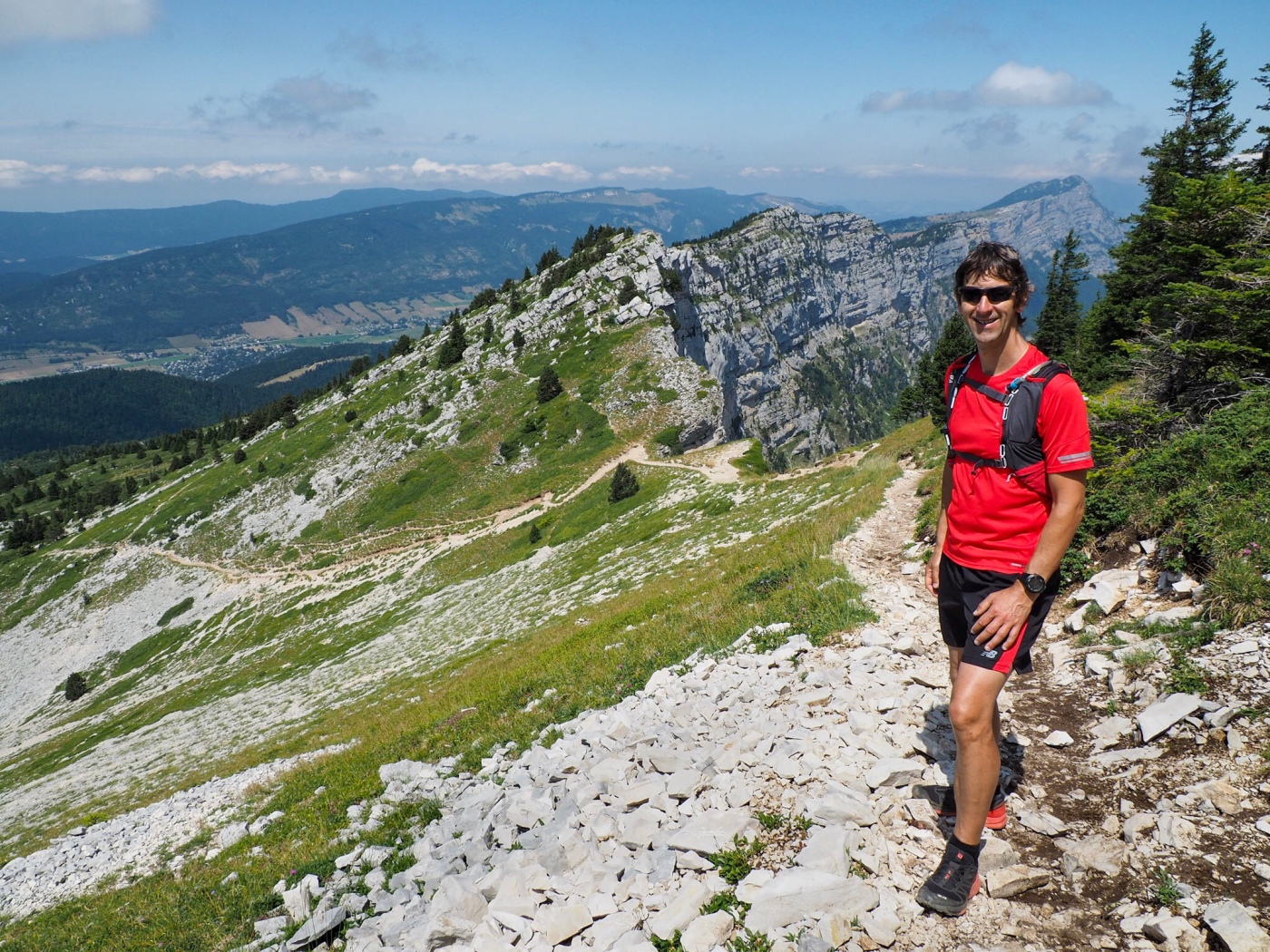 I woke up in the night with a banging headache and churning stomach… no idea why…. I thought I’d survived yesterday’s all-day hike well! And, before anyone suggests otherwise, we hadn’t drunk very much alcohol! After tossing and turning for some time, I ended up waking John as I dressed and found a torch to walk across the campervan parking to the toilet. The good side of this? The sky was clear and the stars were absolutely stunning!

Afterwards, I took 2 paracetamol and managed to get back to sleep, not waking until after 8 o’clock. Because I didn’t feel great, we decided to take our time, tidy the van and go shopping, and postpone our planned walk until the afternoon, if I felt well enough. 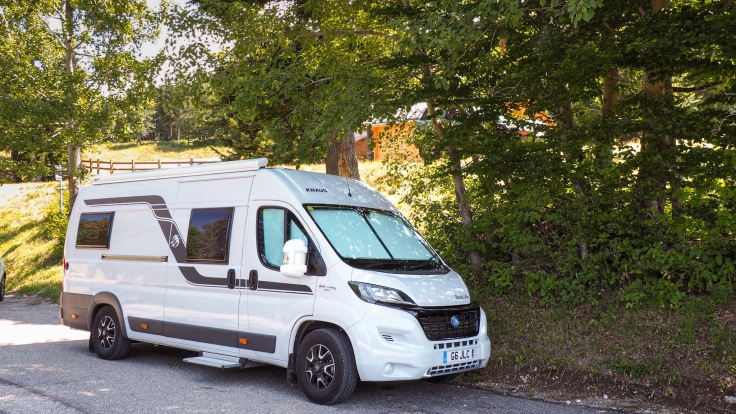 After visiting Netto, we drove up to the ski station above Lans en Vercors, where we parked in the shade and had some lunch. By now I was feeling better, so we decided to do the 4-hour walk up Le Pic Saint-Michel. 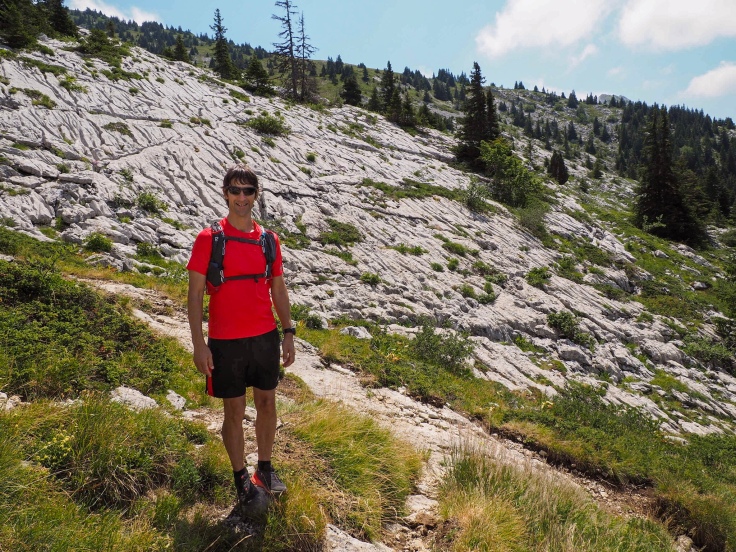 The sun was shining but a gentle breeze meant that hiking wasn’t too onerous. As we set off up the first track, hundreds of little tiny froglets were hopping across the path in front of us. We had to be careful not to step on them! Once we left the forest track, the path wound its way upwards through limestone scenery. The limestone pavements were amazing, with ferns and other plants poking out through the holes and fissures. 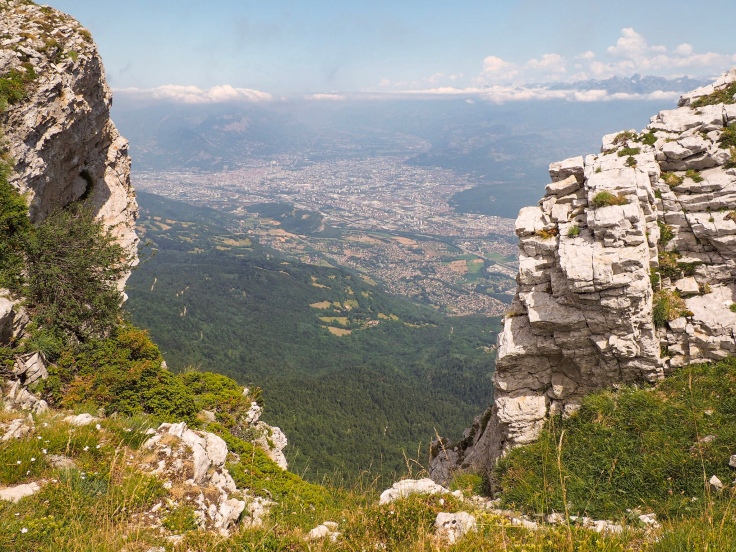 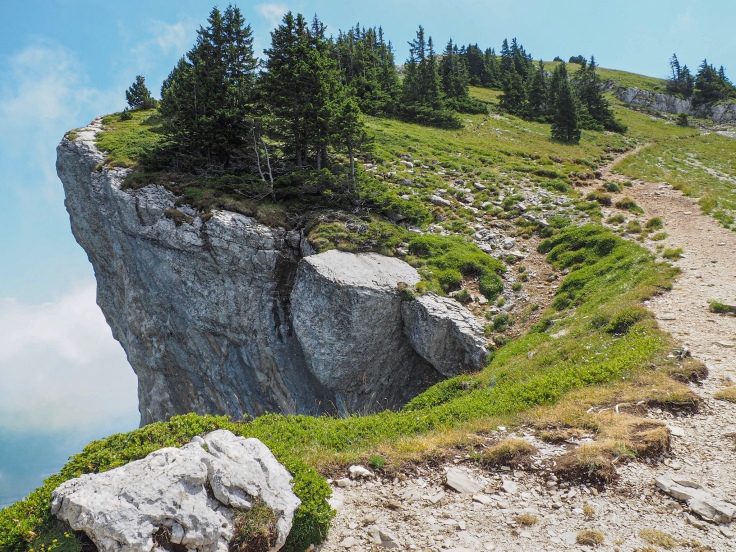 We spent some time watching a couple of birds of prey jousting in the air. Unfortunately, I didn’t get a good photo of them, and John hasn’t yet worked out what they were. Eventually we reached the first col, where I stopped to take photos of the views down the steep cliffs down the other side of the mountain, towards Grenoble. Stunning! 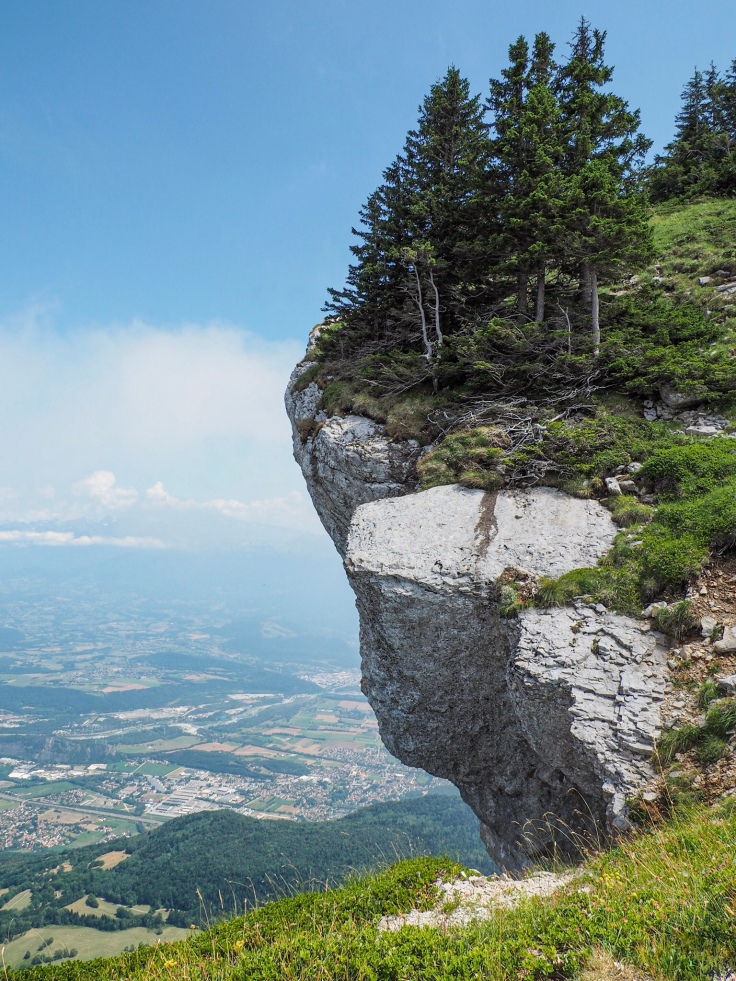 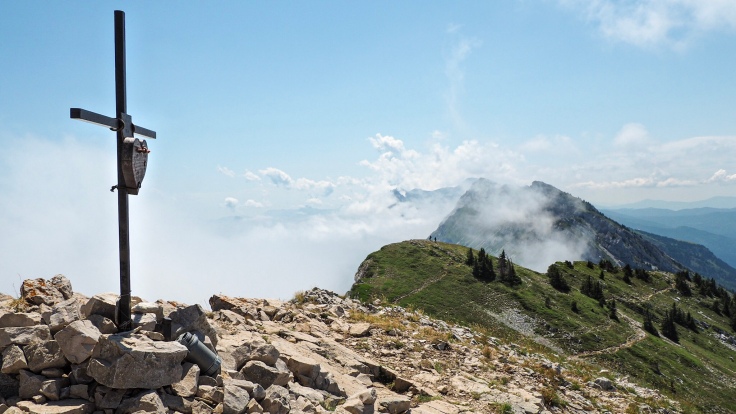 The top of the mountain was marked with a cross, the views from which were far reaching in every direction, although it was rather hazy. The clouds had also started to roll in, obscuring some of the view, but looking rather pretty. 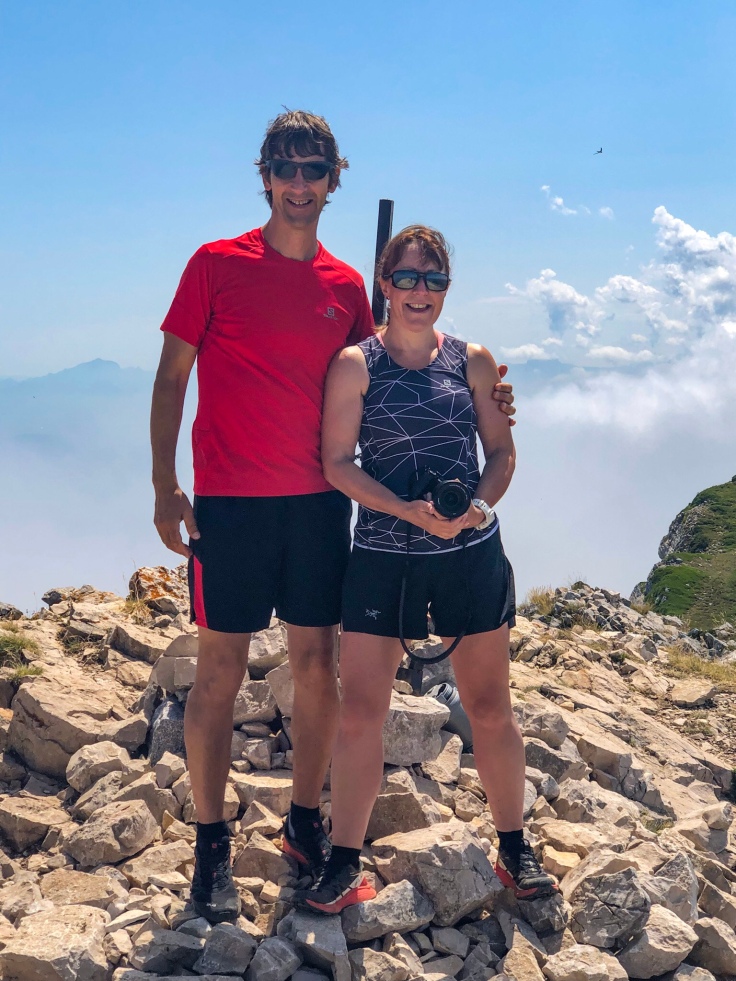 We sat down on bench made from some rocks and an old plank, while we each had a bar of chocolate and some water. Then John took some people’s photo and, in return one of them took ours. After enjoying the views for a while, we started to head back down to a second col further along the ridge. The path zig zagged down and we were soon there. 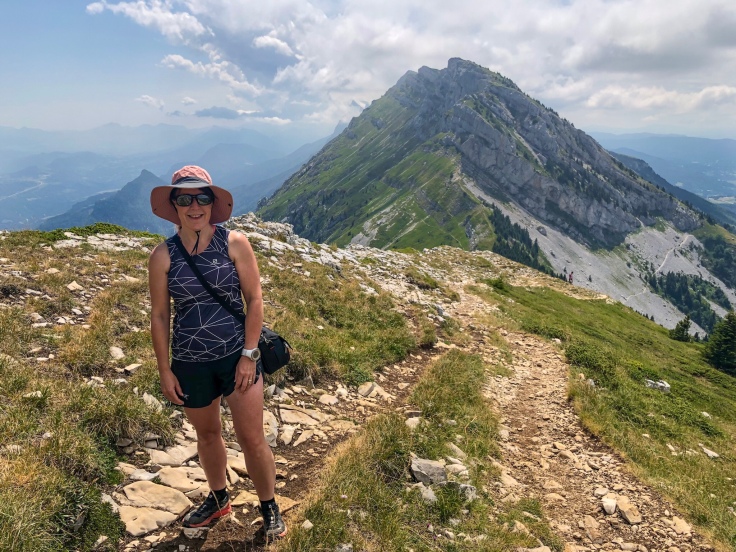 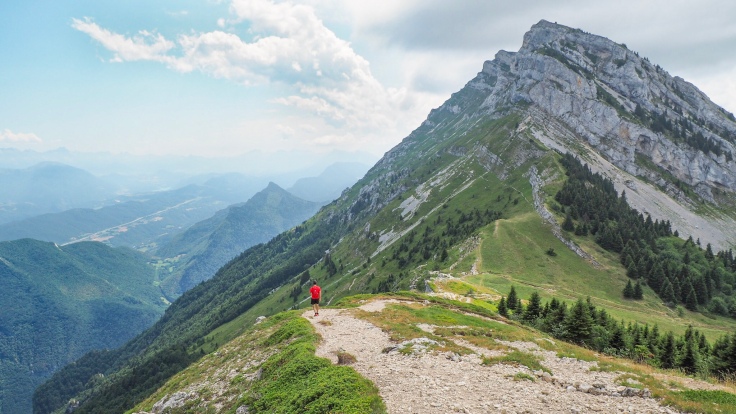 From the col, the path continued steeply down though the limestone, over rocky paths back into the forest. I was glad of the shade because it was quite hot out of the breeze, and even more glad when we reached the refuge. I chose an ice cream from the menu, along with a Diet Coke. When the waiter brought it out, everyone turned and stared. It was massive! When John’s arrived shortly afterwards, we were the source of some amusement as everyone watched to see if we would manage to eat them. Maybe the cost of 11 euros each should have given us some idea that each ice cream was big enough for two! They were lovely though. I didn’t quite finish mine but, refusing to be defeated in front of the watching French, John finished it for me! 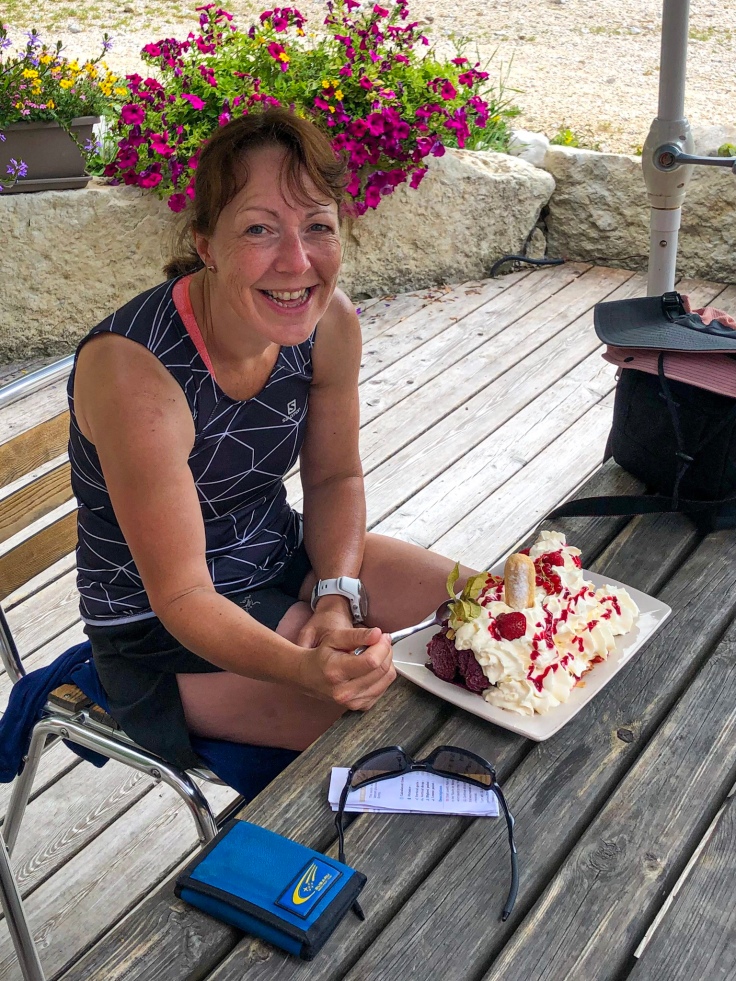 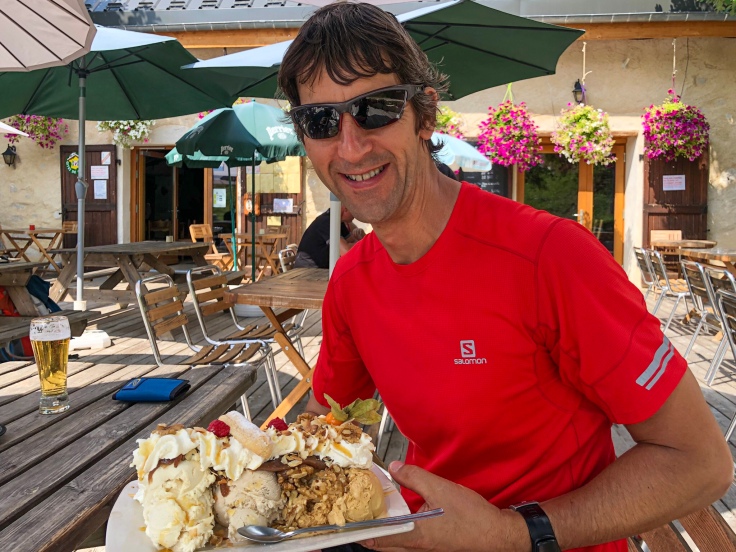 We then completed the last couple of kilometres of the hike back to Bertie, changed into our flip flops, and drove back down to the town. We’ve showered and had dinner, and I’ve had a lovely chat with my mum and dad. Tomorrow we move to Guillestre to meet Dan and Jackie and some other friends. Part 2 of our 3-part trip begins 🙂

One thought on “Another hike, another big hill: Le Pic St-Michel”