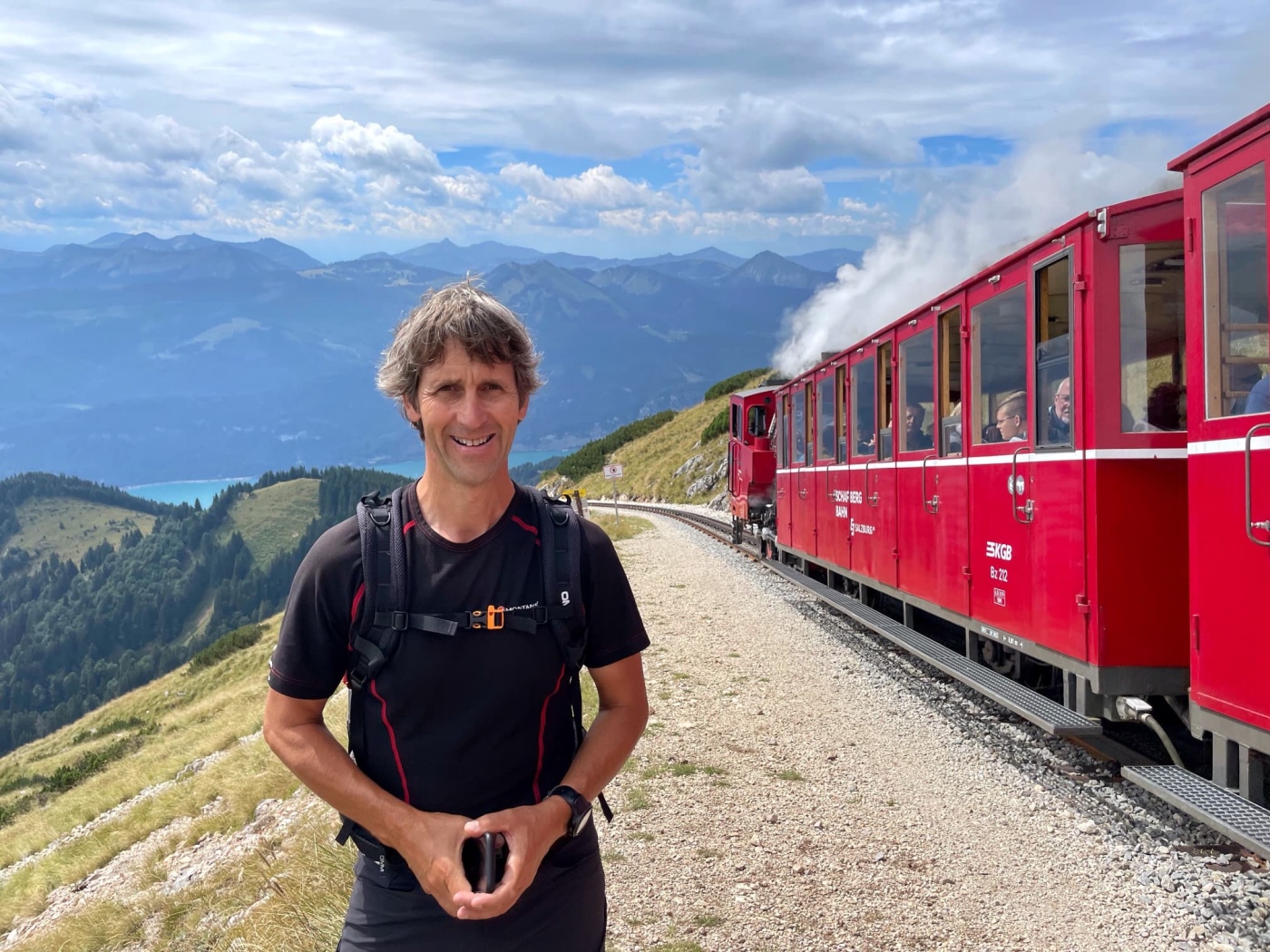 Yesterday, we took a little train up Shafbergspitze (1783 metres high). It was something I fancied doing for a treat, and part of the package of tickets for attractions that we bought for the region. The railway is Austria’s steepest cog railway and has been running from St. Wolfgang up the Schafberg mountain since 1893. The train takes 35 minutes to cover 5.85 kilometers, and ascends 1190 meters. It’s rather like the Snowdon mountain railway, which has been running for a similar time.

We were in the front carriage of the train, just behind the guard’s compartment, which gave us a good view of the track ahead and, when we went round the bends, could also see a second train following us up the track. The views over Wolfgangsee got better and better as we climbed, and we enjoyed passing through cuttings in the rock and a tunnel, and seeing the steep drops to one side.

John had planned an ambitious hike from the top, which I’d decided in my head to halve, to make sure we’d be back at the station in time for the train. We’d booked our return journey for 2.45, in 4 hours. We set off walking up to a cross on the mountain where the it dropped steeply to the valley below, with a hotel and refuge perched on top.

We could see our route zig zagging down the mountain below the cliffs and, when we looked through a gap in the rock, we could see via ferrata cables. It didn’t look too scary though… no worse than anything we’ve done before, despite the warning on the sign that it was a difficult alpine route.

That said, I wasn’t really ready for this type of hike. I had no rucksack or poles… just my camera bag slung over my shoulder. The path down was rocky and damp, and slippery in places. It seemed to descend for ages, and I said ‘I’m not climbing back up here!’. John had planned an out and back route but I’d seen another path on the map, which would make a shorter circular route.

Finally, the path curved around the end of the cliff, levelled off and became easier to walk on. The views were stunning. Apparently, 9 lakes can be seen from Scafberg, and we’d already spotted the 5 we cycled past a couple of days age, and a couple more.

After a stop for a snack and a wee, the path undulated up and down through woods and again became quite difficult, with rocks and tree routes creating obstacles to slow us down. By now I was worrying that we might not make our return train, and was grumpy at the thought of having to walk all the way down. There is a route from the top to the campsite, but it’s rather long. Plus, I fancied another trip on the train!

We reached the path junction to return to the top or continue downhill and debated what to do. There was another sign warning of a difficult alpine route so John got the map out to check if there were any via ferratas, and what it looked like compared with outward route. It looked similar so we decided to give it a go, hoping we could make the long 500 metre ascent back to the top in 2 hours.

I loved this path! It began by contouring the mountain on a ledge before ascending steep rocky steps, some natural and others cut into the mountainside. There was a cable to help balance and haul yourself up the more difficult sections, and this made the ascent much faster than I’d expected.

Within an hour we’d made it back to the railway, and then the station above it. We even had time for a beer at the refuge before we caught our train back. It turned out to be an excellent hike, with a bit of adventure, and a fun day, with having caught the train too.

Back in the valley, we’d just missed a bus back to the campsite and the next one wasn’t for an hour. We’d walked into St Wolfgang to catch the train, but I didn’t fancy walking back again, alongside the road, which would be quite busy now. We checked the ferry times on the board by the landing stage and found out that one was due in 5 minutes. More treats! A boat ride, beers on board and then ice creams when we got off the ferry in Strobl! From the ferry we could see where we’d been… the train track, the hotel on the top of the mountain, and our hiking route back up the mountain face.